Jumping spiders sing and dance during mating interactions. Our goal is to understand the function of these behaviors as well as to understand how they ultimately drive species diversity. This research provides a window into understanding the interplay between the environment, sensory physiology, and mating behavior. Importantly, this work will serve as a foundation to understand potential responses to climate change in small animals.

Biological complexity, from the colorful displays of birds-of-paradise to human language, has inspired scientists for centuries. Our laboratory studies jumping spiders which have some of the most complex communication strategies known.

Males are brightly colored and show off these ornaments in dances. In some species, these dances are coordinated with songs. Unlike birds-of-paradise however, jumping spiders are found in our lawns. Jumping spiders are the most diverse of all spiders, having over 5000 described species. One of the most diverse groups, Habronattus, beginning in the not-too-distant past, has undergone a period of explosive diversification in the southern United States. Our overall goal is to understand the physiology, behavior, and evolution of these amazing animals.

With the continuing loss of biodiversity across the globe, it is crucial to both catalogue existing diversity as well as understand the forces that drive the creation and loss of species. Studies on biodiversity and the effects of climate change have lagged on small invertebrates compared to vertebrates even though they make up the majority of life on earth and are crucial components of all ecosystems.

Our lab strives to meet these goals by studying jumping spiders and their ecology and evolution. In particular, this project will investigate how temperature affects the mating behavior of desert dwelling spiders, in order to understand its potential role in evolution as well as the possible of effects of climate change on selective environments.

One of the goals of our research is to understand the role
of the environment in the evolution of species, signaling strategies, and processing mechanisms. One key aspect of the environment that is critical to these animals is temperature. We propose to study two groups of jumping spiders found in the Sonoran desert of Arizona, to understand:

(1) how shifts in temperature, as predicted by climate change models, affect mating behavior and species boundaries

(3) how shifts in temperature influence the decision making abilities of females.

Money donated to this project will go to funding a specimen
collection trip to Arizona. The goal of the expedition will be to:

(2) measure how temperature varies in their natural environment

(3) monitor daily activity patterns in spiders to understand the role of temperature in their behavior.

Subsequent laboratory studies will examine how their mating behavior changes with temperature, including temperature ranges predicted in climate change models

This project will be a crucial first step to understanding how real world fluctuations in temperature affect selection landscapes as well as understand possible shifts in these landscapes triggered by climate change. This project will also be insightful in sexual selection studies on mate choice, namely by examining a mechanism potentially driving variation in female mating patterns in the field. Donations will be used for field expenses (transportation, room, board, field consumables) 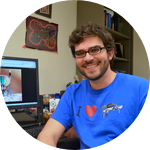 My fascination with animal behavior started from an early
age in my family’s cattle ranch in northern Mexico. While my fascination for spiders and insects first manifested itself in terror, it later grew into a passion for understanding strange, unusual, and wonderful creatures that are found seemingly everywhere yet rarely seen. I’ve worked on a variety of unusual creatures including moths, grasshoppers, flies, spiders, hummingbirds, and plant hoppers. My research program strives to understand animal behavior and in particular the mechanistic basis of animal communication from multiple perspectives and experimental frameworks. My research program has thus far focused on understanding multimodal (communication using multiple sensory modalities) and acoustic (vibratory and auditory) communication as a way to understand basic principles in conservation, behavioral ecology, evolutionary biology, and neurobiology.