The role of alternative energy sources are having a larger impact on our lives than ever before. The addition of solar tiles and insulation to a structure can change its energy exchange/balance with the environment and therefore reduce the amount of greenhouse gases produced. The purpose of this experiment is to determine how close to an adiabatic system (no heat exchange between a system and its surrounding environment) a model home will become being fit with solar tiles and thermal insulation.

The balancing act that leads to the current climate on Earth is nonlinear, i.e. small fluctuations, can produce daunting changes (refer to the evolution of Venus’ climate due to the runaway greenhouse effect). As energy becomes more affordable, increased usage is expected, as in the case of oil over the last several years. Will escalation of energy use reach levels able to perturb the fine balance?

In an attempt to offset this escalating energy usage, two main super powers have made their way to the forefront: solar and wind. Research into these fields has drastically reduced the cost of energy provided by these means. Additionally, congress has extended a tax credit for clean energy for the next 5 years. From a local to global viewpoint, these sources of energy are of interest to everyone.

There are several avenues for each form of renewable energy (water, wind, solar) which, if practiced on large scale, adverse effects arise. For example, solar energy: (i) placement of solar panels competes with agriculture; (ii) large regions covered in solar panels alter surface temperatures, which govern lower-atmospheric stratification above and microbial life in the soil below; (iii) greenhouse gases are still created due to solar cell manufacturing. Fortunately, unlike water and wind-energy harvesting, solar energy collection could be moved into space, assuming it can be done efficiently. Regardless, thermodynamically, entropy will increase overall with any activity. The subject is vast, requiring broad investments. We propose to start with a simple yet realistic problem.

The goal of this experiment is to determine how close to an adiabatic system a model house can become. The roof of the house will be fit with solar tiles, blocking solar energy from heating the roof (and consequently the inside of the house). This will remove one thermodynamic cycle. If heat transfer to the inside of the house is blocked, a heat pump to remove unwanted heat becomes unnecessary. Wall and window insulation for heat conduction and radiation will get the system closer to an adiabatic one in relation to its environment. There will always be heat leakage, but the biggest heat absorption is dealt with ideally by not allowing it to penetrate in the first place. A control model home will also be constructed, identical to the first, but without the addition of solar panels.

In order to ensure the house is as close to an adiabatic system as possible, effective insulating materials will be used in its construction. We are collaborating with a local contractor to ensure the model meets similar standards as a typical American home.

This project will be a great research experience for Adam Trachan, our senior undergraduate majoring in Physics. The results of the project will provide a foundation for opening a dialogue between physics, engineering, and architecture disciplines on how to build houses for a society which embraces sustainable energy future and takes on a challenge to reduce accelerating human impact on climate. If we want to prepare a new generation of young scientists who can communicate across different disciplines, it is a project to fund and do.

Natalia Sidorovskaia
Professor of Physics
University of Louisiana at Lafayette
Now that our atmosphere has reached CO2 levels of 400 ppm it is more important than ever to explore alternative and renewable forms of energy. This is a well-defined, novel project at very low cost and a step into the right direction. 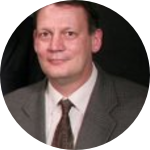 Carl Richter
Professor of Geology
University of Louisiana at Lafayette 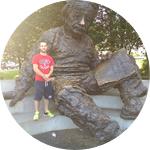 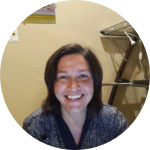 I am a physics senior undergraduate at the University of Louisiana at Lafayette. I am also a dog/hiking enthusiast. I care deeply about the preservation of our planet (recycling, reducing waste, etc.) and this is what inspired me to do this project.

I am a physicist at UL Lafayette, associate professor, and Adam's adviser. The all-pervasive "obsession" with equilibrium of natural processes fascinates me. The fine balance responsible for the current stable climate on Earth allowed humans to survive and progress. So far. Although climate is a very complex system, we can start by isolating and answering simple questions.