Tornadoes are violent rotating winds that kill people and destroy property. My recent work shows that tornado energy can be estimated from the amount of damage and the size of the damage path. Using estimated tornado energy along with population, this study will attempt to better understand how tornado casualties may change as the earth continues to warm. This allows for more insight into the changing behavior of tornadoes.

Tornadoes are violent rotating winds that kill people and destroy property. Tornadoes alone account for nearly one fifth of all storm-related deaths (NOAA, 2015). While the number of deaths increases with the number of people in harm's way, other factors are also important, such as the strength of the tornado. Recent work shows that tornado energy can be estimated from the amount of damage and the size of the damage path. Tornado energy also appears to be the best indicator of deaths and injuries.

A warming planet might lead to even more tornado casualties. By using estimated tornado energy and data models, this study will attempt to better understand how tornado casualties may change as the earth continues to warm.

Tornadoes may be stronger and more violent in the future. How much stronger and how many more people they may kill is important. Understanding the link between weather and climate can save lives. In response, this study will attempt to link warming conditions and tornado energy, allowing for better information on what future tornado deaths and injuries may look like.

Forecasting future tornado deaths and injuries can aid in planning efforts made by emergency managers, public officials, and the general public alike. Will there be a spatial shift in tornado casualties? Will tornado casualty rates increase? Am I living in an area of tornado casualty danger? These are questions that matter and can be answered through this work.

Travel Support: $1,000 will be used to travel to Portland to attend the American Meteorological Society (AMS) conference on Severe Local Storms and to present the early findings of the study.

Publication Fees: $1,000 will be used to publish the final results of the study in an open access scientific journal (e.g., PLoS ONE). This will allow for the research to have an impact within the fields of Meteorology and Climatology.

Storm Survey Support: $1,500 will be used to travel and be a part of a post-tornado storm survey. This will aid in the understanding of the data used in the project and allow me to be a part of primary data collection.

Tyler is currently my graduate student working on his PhD in Geography at Florida State University. He is proposing this important project that should go a long way toward understanding how many more deaths and injuries can be expected if tornadoes get stronger as the planet warms. Results from the project will certainly grab national media attention due to the fascinating nature of these powerful storms. 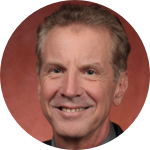 James Elsner
Professor & Chair, Department of Geography
Florida State University
Tornadoes are fascinating and violent storms. Understanding their behavior and effects is an important undertaking that can save lives. Given Tyler’s foundation in climate change and storms, specifically tornadoes, this project has the potential to create results that have lasting impacts and add to the ongoing conversation of tornado climatology. 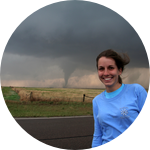 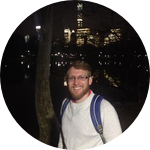 Self-proclaimed weather geek interested in severe storms and climate. Most of my work focuses on tornadoes and how they may be changing in a warming world.

5 Lab Notes Posted
We're published!
We did it!
Tornado energy in real time