Diamondback terrapins are a keystone species in salt marshes and estuaries. These turtles are being threatened by coastal erosion, loss of salt marsh habitat, road mortality, and are at a high risk for entrapment in crab pots. In 2019 it was found that individual terrapins can be seen in footage taken with drones. Therefore with the use of a drone a more accurate population assessment can be conducted in order to determine population health.

The Southcoast Terrapin Project has been studying Diamondback Terrapins in Buzzards Bay since 2016. The project has been focused on mature female terrapins due to them being easy to catch during nesting season leaving us without an accurate demographic. Unlike other research areas, such as Wellfleet Bay, we cannot step out into the marsh to catch terrapins due to the unsafe sediment and deep water of the channels. Since we were already flying drones to map the erosion of fragile barrier beaches where the turtles nest we decided to see if we could use the drones to explore hard to reach areas. It was then that we found that we could see and count individual terrapins in hard to reach areas with little to no disturbance to the habitat or the animals.

In August of 2020 an environmental police officer pulled up a crab pot in Wareham, Massachusetts that had 27 drowned terrapins in it. Since the start of the Southcoast Terrapin Project in 2016 numerous terrapins have washed ashore dead, presumably from crab and lobster pots. Since the population in southern Massachusetts remains unknown it is important to determine the population in order to know how they are being affected by incidental catch such as this. Many states have already documented this as a key factor in the decline of terrapin populations, but terrapins in the Southcoast region are understudied and many things about them remain unknown. As a keystone species in salt marsh habitat it is crucial to learn as much as we can about this species before it is too late.

Buzzards Bay consists of numerous coves and inlets where Terrapins can be found. Over thirty areas where terrapins can be found have already been documented. A protocol for collecting images of terrapins in these areas using a DJI drone has already been created. This protocol makes sure to fly at the same height, time, and use the same starting and ending locations. In addition a habituation period at the beginning and the end of the flight is necessary to make sure that any terrapins spooked during the initial take off of the drone can come back to the surface and stay in the transect region. At the end of the season all imagery will be analyzed to determine if this is a plausible solution to determine population for the region.

This past summer our Drone met an untimely end. After four years of use in the field it finally died. In order to continue with our research a new drone needs to be purchased. Back up batteries are necessary because each one only lasts for a small amount of time during a flight and must be replaced before it runs out of charge. Rotor blades also dull quickly and need replacing on the regular. In addition with every flight conducted there is a small amount of risk to both the drone and any property nearby therefore insurance needs to be purchased to protect the pilot.

The health and population status of Diamondback terrapins in MA and throughout their range is largely unknown. State listed as threatened in MA, reliable population assessments are critical for informed conservation and management decisions. Drones are a new, exciting and innovative way to study populations with minimal disturbance to the species. NECWA has extensive knowledge of terrapins, drones and the MA south coast saltmarshes and are well suited for this project. 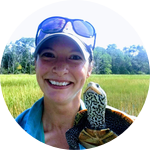 The Expected Research timeline is dependent on the actual terrapin season. It is important to start flights as soon as Terrapin activity is expected and continue in at least one location throughout all stages of the season (ie. mating, nesting, and hatching/brumation). This ensures an accurate count for the site location and will help us better understand the purpose of the area for these turtles (Feeding, mating, or nesting).

Start of Terrapin Season and Preparation of Drone

At Least Eight Flights at One Location to Compare Population At Different Times of Year (ie: Nesting, Mating, or Hatching Seasons) 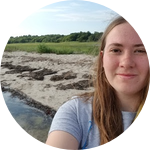 The Southcoast Terrapin Project is an all volunteer project run by the New England Coastal Wildlife Alliance (NECWA). Krill Carson is the president and founder of NECWA. She is a trained whale biologist who is now studying Ocean Sunfish off of New England and has a sighting network for ocean sunfish and basking sharks. In 2016 she was asked to help research diamondback terrapins in the Southcoast of Massachusetts.

Danielle Marston graduated in 2015 from Unity College with a Bachelors Degree in Marine Biology. She is currently the Director of the Southcoast Terrapin Project with The New England Coastal Wildlife Alliance (NECWA) and all volunteer non-profit, and a shift supervisor at a Starbucks cafe. She recently graduated with a second bachelors degree in English Writing and Rhetoric from the University of Massachusetts Dartmouth.