Antimicrobial resistance (AMR) has been responsible for over 700,000 deaths in 2016, with an estimated €50 billion in lost productivity and healthcare. By 2050 AMR could result in 10,000,000 deaths and 100 trillion in lost productivity. New drug discovery is urgently needed to tackle AMR. The goal of VIDAA is to investigate the potential of invertebrate venom peptides as a novel source of antimicrobial compounds and to understand their mode of action.

The World Health Organisation lists antimicrobial resistance (AMR) as one of the most urgent medical crises to be addressed. Globally, AMR has been responsible for over 700,000 deaths in 2016, and did cost an estimated €50 billion in lost productivity and healthcare. If remedial measures are not rapidly taken, AMR may result in excess of 10,000,000 deaths and 100 trillion in lost productivity by 2050.

The widespread use of unspecific antimicrobial agents in all aspects of human society (from animal feed to human healthcare) has lead to the selection of strains resistant to the treatments they have been previously exposed to. There is a constant need for novel agents targeting pathogens that have evolved immunity to previous treatments.

Venom comprises complex amalgamations of different molecules and polymers, including amino-acids, peptides, polyamines, proteins, free amino-acids and inorganic salts, most of which are potential drug-lead compounds. For example, it is estimated that spiders alone (as a taxonomic group – 45,000 species described globally) produce in excess of 10 million distinct bioactive polypeptides, of which only a few thousands (approximately 0.01%) have been characterised so far . Polypeptide antibiotics are reputedly fast acting but their mode of action has not been extensively investigated. Polypeptide antibiotics may be less prone to select for AMR bacterial strains making them ideal candidate for the development of novel antimicrobial compounds.

VIDAA aims to extract, screen, characterise, understand the mode of action and synthetise novel polypeptides with antimicrobial activity isolated from small to medium invertebrate organisms. To do so, we use a five-step process: 1) refine and extend existing venom extraction and bioactivity screening protocols; 2) determine the chemical structure of novel bioactive polypeptides isolated from these venoms; 3) specifically evaluate the potential of purified venom peptides in terms of antimicrobial activities; 4) characterise the mode of action of isolated peptides and 5) artificially synthetise those novel peptides of interest to test them further for activity and toxicity.

Project VIDAA has secured €25,000 from Galway University Foundation a year ago. We have made great progresses since. We have equipped our lab, identified and isolated several venom with antimicrobial properties.

At the moment, over 2,000 spiders are being maintained in our lab and venom is regularly extracted. However, we need more funding to isolate these antimicrobial compounds of interest, characterise their exact chemical structure and test their activity even further.

I am excited about this project. For the last 5 years, I have been discussing almost daily with Dr. Dugon about the potential use of venomous species for the development of new drugs and how to approach scientifically / technically the question. The potential of these species as sources of novel drugs is phenomenal - They can really be useful and should not be seen solely as "nasty bugs"... but we are still a long way towards this almost untapped potential resource for the development of new antibiotics. 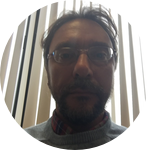 We aim to fully characterise peptides of interest in the coming 12 months and to perform large scale antimicrobial assays on all candidate polypeptides isolated from three venom (2 spiders and a jellyfish) within 24 months. Depending on funding constraints , we also aim to investigate venom extracted from at least 15 species of spiders, centipedes and marine worms. 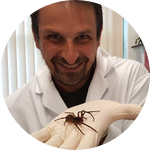 Dr Michel Dugon runs the Venom Systems & Proteomics Lab and teaches Zoology at the National University of Ireland Galway.His research focuses on the evolution of venom systems and on the potential of arthropod venom as a source of novel therapeutic agents. After a 6-year stint chasing venomous creatures in the jungles of South East Asia, Michel published extensively on the evolution of venom systems while pursuing a PhD in Evolutionary Developmental Biology. Dr Dugon was awarded the 2015 Irish National Teaching Award in Higher Education and the 2017 Ryan Award for Innovation. Dr Dugon is currently working on developing the VIDAA network (Venom Investigations for the Development of Antimicrobial Agents) in collaboration with Irish, French and Belgian researchers.

As the founder and director of the science outreach Eco Explorers, Dr Dugon dedicates a sizable amount of his time promoting ecological awareness in the media and in schools throughout Ireland. Dr Dugon’s work has been featured on national and international networks, including RTE, the BBC, Euronews and SKY.

TED Talk: “Spider Dust and Scorpion Juice: Are Bugs the Future of Therapeutic Drugs?” Dr Michel Dugon is a lecturer in Zoology at NUI Galway. This talk was given at a TEDx event using the TED conference format but independently organized by a local community.