Have you ever complained about the forecast because the snowfall amount was so far from correct? Even the most sophisticated weather models rely upon snowflake formulas that base themselves on primitive measurements of a few hundred flakes captured in the the 1970s. The Alta Project brings snowflake science into the 21st century with a new camera system that automatically takes millions of high-resolution photos of snowflakes in mid-flight!

The above video on The Alta Project that was produced by The WeatherChannel describes how we have developed an exciting new instrument that is changing the way we view snowflakes. With high speed, multi-angle digital photography, our Multi-Angle Snowflake Camera is revealing the incredible diversity of snowflake forms that fall from the sky.
It has taken years to develop the MASC, and we are lucky to see it becoming a scientific success. Government agencies and universities are starting to request the technology for their own research projects.
But we have remaining challenges. A large part of the scientific value of our instrument is that it provides multiple angle views of a single snowflake that can be used to constrain the snowflake mass and 3D shape -- key properties for the snowflake formulas needed for accurate weather forecasts.
Unfortunately, while we have millions of pictures, it is only rarely that each of the multi-angle images is in crisp focus, and this makes the 3D reconstructions hard to do systematically. The images need a better depth of field. As powerful as our lights are, they are not powerful enough.
The modern 2700 lumen (40 Watt) LEDs we use are wonderfully robust in cold conditions. But the necessary camera exposure time to freeze the falling flakes is just 1/40,000th of a second. This means we must open the camera aperture very wide to let in enough light. We can improving the depth of field by closing the aperture. But this must be balanced by switching to brighter 5500 lumen (90 Watt) LEDs.
Our goal is to improve the value of our technology and measurements for the scientific community and the public. If all three cameras can consistently yield in-focus images, then atmospheric scientists will be able to better represent the relationship between snowflake form and fallspeed in weather models. And the public will be able to better enjoy the beauty and fascination of snow.
Switching to higher powered LEDs will require a careful redesign of our lighting system. And then there will also be implementation, and testing. We will deploy the MASC and its new lighting system at our field lab at Alta Ski Area. Backers of our project will be the first to receive a smartphone app that reveals, live from Alta, the 3D shapes of snowflakes in mid-flight.

We all know the dangers of severe winter weather and how valuable it can be to have adequate warning of an impending storm. And we fans of skiing dream of the next powder day.
But we also know how often the forecasts seem to get it wrong. It may seem surprising, even poetic, but it is now widely acknowledged that the Achilles Heel of our immensely sophisticated winter weather forecast models is how well they can represent the behavior of tiny snowflakes just millimeters across.
To get snowfall right, these sophisticated computer codes need to be able to accurately simulate snowflake type and fall speed. A simulated storm will dump snow sooner and further upstream if the model formulas dictate that the snowflakes are falling relatively quickly. But if models don't get the fallspeed right they won't get the snowfall location and amount right. And this affects the ability of the public to prepare for a possible blizzard.
Current models reproduce just two basic snowflake forms: one is clusters of snow crystals called "aggregates"; the other is heavily rimed "graupel" particles that grow from the accumulating collisions of a single snow crystal with millions of freezing cloud droplets. Aggregates are fluffy and fall slowly. Graupel is round, dense, and falls fast.
But how fast? And is this clear distinction between aggregates and graupel a fair reflection of the complexity of snowflake types?
Remarkably, current weather models base their answers to these questions on measurements of just a few hundred snowflakes collected by University of Washington researchers in the Cascades in the 1970s. Using primitive techniques by today's standards, fallspeed was measured in a tube where the air was sheltered. Only the rare flake landed where it could be photographed without being destroyed on impact. It was cold, hard work to get even a few good pictures.
With the Multi-Angle Snowflake Camera (or MASC) that we have designed and built, we are able to use high-speed digital cameras, high powered LEDs, and fast electronics to revolutionize snowflake measurement. Unattended, at all hours, we collect millions of photos over a few months, each snowflake examined from three angles, while simultaneously measuring fall speed. We don't need to still the air first, and the snowflakes are untouched. So, for the first time, we are photographing falling snowflakes as nature created them.
The MASC is revealing some remarkable things. The sheer diversity of snowflake forms is astounding -- and often bizarre. Everything possible seems to happen in the sky. Aggregates and graupel are only the extremes. And initial results are suggesting that the fallspeed formulas used in current weather models may be quite wrong: early measurements may have missed that snow swirls, and that turbulence plays an important role in how fast snowflakes fall.
Because we are collecting large amounts of snowflake information, not only at Alta, but also with other researchers who are using the MASC to study snowflakes elsewhere (e.g. California, Greenland and the Arctic Ocean), the potential of these measurements is to transform how models represent snow development and snowfall.
We hope to improve how well meteorologists can forecast winter weather -- so that you can get home safely, or maybe plan a "sick day" at your local ski resort.

With microryza funds, we will be able to implement improved lighting on the Multi-Angle Snowflake Camera to provide improved high resolution photographs of individual snowflakes from multiple angles. We will deploy the improved Multi-Angle Snowflake Camera at Alta for the winter season of 2013-2014, continuing a live feed of the newly improved images through Alta's Snowflake Showcase.
A more sophisticated smartphone app will be developed as well that will allow viewers to explore in real time snowflake shape from multiple angles and relate the shapes to snowflake fall speed, Alta Ski Area meteorology, snowfall amount, and snow density. Microryza supporters will be the first recipients of this app.

Your contributions to this microryza project will cover upgrading the Multi Angle Snowflake Camera and deployment to Alta Ski Area for the 2013-2014 measurement season. Expenses include parts and engineering time for the design and fabrication of high-powered LED lighting, instrument installation operation at Alta Ski Area, and development of a smartphone app that provides a live feed of snowflakes. The app will be provided to all backers.
Personnel costs cover time to develop improved lighting and a smartphone app. Contract support to Alta Ski Area covers onsite deployment and maintenance of the MASC at Alta. 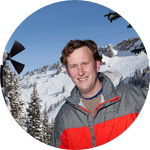 Tim Garrett has authored 60 peer-reviewed articles about his research on aerosols, clouds, precipitation and the thermodynamics of complex systems. His teaching covers undergraduate and graduate courses in thermodynamics, cloud physics and radiative transfer. He works with mechanical engineer Cale Fallgatter who holds an M.S. in Mechanical Engineering from the University of Utah and has a patent pending on Systems and methods for imaging of falling objects. Programmer Konstantin Shkurko holds a B.S. in Physics and Mathematics from Cornell University and an M.S. in Computer Science from the University of Utah. He is currently a Ph.D. student at U Utah with a specialty in physically based rendering of objects. Site Engineer Howie Howlett installs and monitors meteorological instrumentation at Alta in addition to being the Assistant Director of Alta's Avalanche department.