Striped skunks have foraging habits that may indicate strong problem-solving skills. To understand the evolution of intelligence, I'm testing their knowledge of how objects support each other. I’ve learned that skunks can solve problems by memorizing visual cues, rather than understanding how something works. But I have one question left: is the skunk that learned to pull supportive slats smarter than the two who did not, or did different task demands limit the skunks’ cognitive resources?

Striped skunks are "complex foragers", meaning they have a broad diet, patchy distribution of foods in space and time, and food that requires manipulation to extract. These habits may result in strong problem-solving skills, memory, and understanding of physical rules that govern how objects interact (such as weight, support, and gravity) and therefore should predict cognitive skills indicative of advanced intelligence (1,2,3,). Indeed, species such as great apes (including chimpanzees and humans) and corvids (such as crows and ravens) have complex foraging habits and these are taxa that are well known for their intelligence(1). For these reasons, striped skunks have the potential to be strong problem-solvers, but no one has ever tested their cognitive abilities.

This project has the potential to influence our understanding of why intelligence evolves. Most "intelligent" species, like chimpanzees and ravens, have complex foraging, but they also share other ecological factors, such as strong sociality. These factors, and their relative influence on intelligence, have yet to be disentangled. Many species with complex foraging, but less sociality, are commonly known as smart or crafty, but few of them have been studied for their cognitive abilities, such as raccoons, possums, bears, and skunks. Understanding the cognitive abilities of species that differ on such important factors, like striped skunks, will help us figure out what ecological factors select for cognitive abilities and learning across many species, including humans!

The goal of this project is to answer a final question in my data collection with skunks. Originally, I examined whether skunks can learn that objects will support other objects. My current results are inconclusive on that point, but I do know that skunks could solve problems by visual memorization alone, without necessarily understanding physical rules. Many studies have concluded that if an animal can solve a problem, then it probably understands it in the same way a human does. My research confirms that this is not necessarily the case. I’m still working on this question: is the skunk who learned to pull supportive slats smarter than the two who did not, or do skunks, like children, find it hard to problem-solve when they must do complex actions, showing a limit on cognitive resources?

In order to continue with data collection, I need to support the Organization for Bat Conservation (Bloomfield Hills, MI) for the time that their staff dedicates to this project. Staff at the OBC spend time helping set up the research, moving the animals to research areas, and occasionally assisting with data collection. Currently, I spend 7 hours a week testing skunks. At this rate, I have about 3 more months of data collection left, which ends up being at least 84 hours of staff time.

The OBC is a non-profit and supports many rescued and rehabilitated animals and depend upon donor support to fulfill the mission of educating people about conservation, so compensating them for their limited time is extremely important.

This project was previously funded by a $1500 award from Oakland University, the Provost's Grant, which covered staff fees up to January 2016.

Skunks have never been studied for their cognitive abilities until now. Zoe's project is innovating, theoretically-grounded, and rigorous. Let's help her extend the study of non-humans to other less traditional species that can greatly inform us regarding factors responsible for physical intelligence. 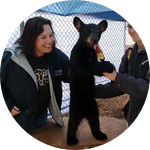 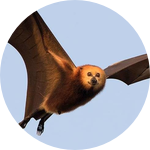 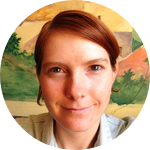 I started studying animal cognition and intelligence during my undergraduate experience at Bard College, where I had the opportunity to test the problem-solving abilities of a New Zealand parrot, the kea. This catapulted me directly into thinking about the nitty gritty questions of animal intelligence, and I haven't stopped since! Now I'm a third year graduate student in the Psychology PhD program at Oakland University. I started studying skunks in my second year here (September 2014) with a test of their visual acuity; that study was to help us better design puzzles for skunks. It turns out they have pretty poor vision, but still good enough to see large puzzles! We always try and use food rewards at least 1"x1" to ensure they can see the food.

As well as this project, I'm researching the innovative abilities of bears and cats, the mood biases and photograph recognition of an American black bear, if gorillas and black bears can spatially represent numbers, and mood biases in rescued and neglected horses.

In my (non-existent) free time, I ride my horse, Jazz, through the Michigan woods with my twin sister. Being a twin has definitely influenced my passion for science. Growing up, the two of us dissected all of our differences, trying to pinpoint the exact environmental factor that caused them (e.g. she is 3 inches taller than me, probably due to her getting more nutrition in the womb). I also enjoy playing board games, hiking, camping, and trying to teach my dog how to play fetch.

One skunk (Raspberry) started with the arbitrary tasks and is now completing the real tasks.

Two skunks (Seymour and Sebastian) started with the real tasks and are now completing the arbitrary tasks.

Raspberry passed criterion for learning to touch a painted line with food on it over an unbaited painted line (condition A and then condition B, methods section) and then I tested her with the other conditions. She appeared to be using a visual rule about contact between the food and painted line, and she avoided broken lines. Raspberry transferred her knowledge to the real slats (passing criterion immediately on conditions A and B) and I am now testing her to see if she is using the same rules as with the arbitrary tasks.

Seymour and Sebastian failed to learn to pull a supportive slat (slat supporting a food item) over an unsupportive slat. After going through the testing conditions (with no improvement), I am now testing them to see if they can learn the arbitrary task.

The reason why I cannot tell if skunks can understand support is because the only skunk who has learned the task with real slats received the arbitrary tasks first, in which she could ONLY use visual cues. She may therefore have transferred the use of these visual cues to the real task, even if she was capable of using or learning about the physical rules.

But, there is still the question of why one skunk learned any of the tasks, and two have not yet learned the tasks, and there are actually two possible answers for that question:

1) Raspberry is smarter than Seymour and Sebastian, and all the skunks would have shown the same pattern regardless of which scenarios (real or arbitrary) they completed first.

2) There is an order effect (remember, Raspberry received arbitrary first, then real, while Seymour and Sebastian received real first, now arbitrary), where learning the arbitrary tasks first makes it easier to learn the real tasks. Maybe the action of actually pulling a slat is complicated enough that it uses up a skunk's cognitive resources, making them not have cognitive resources to spare on 1) paying attention to the location of the food and 2) inhibiting pulling a slat immediately. Learning the arbitrary task first allowed Raspberry to learn the visual patterns before being asked to make a complex motor response (pulling a slat versus just touching a painted line). This could have lightened the difficulty of the real slat task when she received it later.

These explanations have created different predictions for how the skunks will perform with continued testing:

1) Seymour and Sebastian will also fail to learn the arbitrary task, and giving them the real task again will show no improvement.

2). Seymour and Sebastian will learn the arbitrary task, and giving them the real task again will show much improved performance.