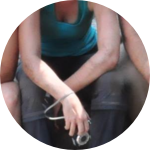 An Archaeological Excavation of a Roman Bath Complex

Hello again!I wanted to update you all on the current state of the Cosa Excavations project that you all so generously helped last summer. During the last excavation season, we focused on the exter...