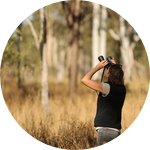 I’ve always been passionate about animals and embarked on my career in wildlife conservation after completing a Bachelor of Science with a major in Zoology at the University of Queensland in 2000. During my final year of university I’d volunteered at the local Lone Pine Koala Sanctuary and I was lucky enough to be offered a position there when I graduated (the first time!). I spent the next five years working at zoos across the globe including London Zoo and Australia Zoo in the role of koala supervisor. I longed for an opportunity to make more of an impact at the ‘front line’ of conservation, so returned to the University of Queensland to study a Bachelor of Veterinary Science. I graduated as the dux of the school with first class honours and a university medal in 2009 and returned to London to work in small animal practice and earn my stripes as a veterinarian.

After 5 years as a clinician, home (Australia) was calling and I landed my dream job with Dr Jon Hanger at Endeavour Veterinary Ecology helping to manage a koala population in South East Queensland. Over the last 4 years I have treated many cases of chlamydial disease in this population, gradually accumulating a range of observations and questions about chlamydial pathogenesis. Last year I was given the opportunity to further develop a long-standing relationship with the highly respected Professor Peter Timms and answer some of my burning questions about this debilitating disease in my furry friends, and started a PhD at the University of the Sunshine Coast under his guidance. I have been a co-author on several submitted and published papers about koala Chlamydia and population management, presented at the 2017 Australian Chlamydia Conference, and recently started working as a Researcher at the Brisbane Koala Science Institute.

Is habitat quality a key factor in determining whether koalas develop chlamydial disease?

Hi All, I just wanted to give everyone a bit of an update with the project, as there have been some delays with my progress. The direction of my PhD changed a little, which meant I wasn't able to ...

Chlamydial disease progression is more common in koalas than previously recognised, and MacGyver wants to let everyone know..

Hi everyone. Apologies for the break between posts, my PhD has been keeping me busy! My second paper has now been published as a result though (see link below), and gives us new insights into chl...

While I've been busy meeting all the joeys from the last year, the first paper from my PhD was published. Enjoy! https://journals.plos.org/plosone/article?id=10.1371/journal.pone.0209679I've also ...

Thank you to all my backers for your support and donations. I'm funded!

Unlocking the secrets of the swabs

I've been busy in the lab this week extracting DNA from some swabs that have already been collected (some might say, the 'less glamorous' side of my research). Each of these little tubes hold a pi...

One of the perks of the work I do is getting to meet plenty of cute little faces (check out their matching pink noses). This is Aurora getting weighed on the scales with her mother Dawn, who is h...

Has anyone seen my koala?

Ready for another vet exam. The swabs you can see in the picture are the ones we use to sample the koalas for Chlamydia testing. Hmm, now the only item I'm missing is my koala.... :)

This is Jim being released back into his capture tree after a clean bill of health at his veterinary examination.https://www.facebook.com/endeavourvet/videos/211548146382150/

The cutie in my cover photo

Wondering who the star model for my project is? This is Tanja, a young female. This photo was taken when she was in care at Endeavour Veterinary Ecology receiving treatment for Chlamydia. Unfort...