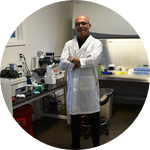 Dr. Farhad Parhami worked at UCLA as a biomedical researcher and Professor of Medicine for over 22 years. While at UCLA, Farhad studied the effects of certain sterols, including cholesterol and oxidation products of cholesterol, so called oxysterols, on cellular signaling, and physiological and pathological responses of cells to environmental signals that define health, survival and disease. In recently published studies, Farhad and his team at MAX BioPharma Inc. (www.maxbiopharma.com) showed that a specific oxysterol compound, designed by the company scientists, has very potent anti-inflammatory effects when applied to immune cells called macrophages in vitro. The team also reported that this oxysterol drug candidate exerts anti-inflammatory and disease inhibitory effects in preclinical animal models of fatty liver, atherosclerosis, and obesity related inflammation, while having an excellent safety profile. Since macrophage activation is the first event in triggering psoriasis and psoriatic arthritis (PsA), the team investigated the ability of its drug candidate to inhibit stimulation of macrophages by mannan, a sugar molecule that when given to mice causes all the symptoms and PsA including skin lesions and joint disorders. The team is now hoping to test this very promising drug candidate in a mouse model of PsA that shows the manifestations of the human disease (The Mannan Induced Psoriatic Arthritis (MiP) Model in Mice | Redoxis). If successful, this will allow the company to take the next steps toward human clinical trials, with the hopes that its anti-inflammatory, orally bioavailable drug candidate, which acts differently than the available drugs for PsA (including Enbrel and Cosentyx) will help many patients who suffer from psoriasis and PsA in the future.

Can hair loss be reversed with Oxy133, a sterol based drug candidate?

Thank you to all who have donated and made our dreams a reality! We are very excited to complete the experiment and see where our valuable technology can take us. In the coming weeks once the fund...

Hello all! Recent events have happened in my lab that we did not anticipate, so we have changed our budget to reflect that.1. We for the last couple months had been planning another small study wit...

We will be using BioDuro to conduct our experiment. They are IACUC and AAALAC approved.

77
1
1
Here is a link to their website: https://bioduro.com/discovery/dmpk/
Can hair loss be reversed with Oxy133, a sterol based drug candidate?
View comment