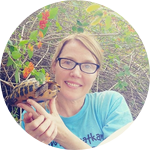 I received my Bachelor's Degree in Psychology from Baruch College in NYC. After graduating, I moved to Southern California and switched my focus to Marine Biology. While in California I worked as an Aquarist in the aquarium industry, working with many different species of marine fish, sharks, and invertebrates. After moving to Denver, I worked as the Assistant Curator of Fish, Invertebrates, and Herps at the Downtown Aquarium. While there, i worked with a variety of freshwater turtle species and successfully rehabbed a sick Painted Terrapin. That experience inspired me to want to do conservation work with freshwater turtles and tortoises. Returning to Southern California, I spent three years at the Turtle Conservancy's (www.turtleconservancy.org) conservation and captive breeding facility, where I had the opportunity to work with some of the world's most critically endangered turtles and tortoises in a ex situ environment. I am also the former SSP Coordinator and AZA Regional Studbook Keeper for the Forsten's Tortoise. (SSP Program; AZA Regional Studbook Program) I am now partnering with the Turtle Survival Alliance (www.turtlesurvival.org) to continue the research and conservation efforts focused on the two endemic chelonians of Sulawesi.

Please feel free to watch the attached podcast where I talk about the work that is being done in Sulawesi.

News from the Field

Because of the devastating earthquake and tsunami that struck Central Sulawesi in September 2018, we made the decision to put the research on hold so we could give our local counterparts and friend...

The project has continued to move forward over the last year! We did have some setbacks, including delays in getting the Indonesian research permit which resulted in personnel changes. Because o...

Let's Save the Endemic Turtles of Sulawesi!

I am heading back to Indonesia to meet with the universities and government agencies to finalize the paperwork needed for the research permit so Andrea can get out into the field and start surveys....

Hey! We have another Project Update!

Since the last update, we have secured additional funding from Wildlife Reserves Singapore and Riverbanks Zoo and Garden.  We would also like to thank the California Turtle and Tortoise Club for th...

Over the last several months, while the Forsten's Tortoises have been busy enjoying their hibiscus, we have been busy applying for the additional funding needed for the project.  We are happy to re...

You guys did it!  Thank you so much for all your donations and support.  We are now 100% funded!!! This project is very important to both of us and we appreciate that you all were willing to help u...

During our reconnaissance trip to Sulawesi in June 2016, we met with the National Resources Conservation Agency (BKSDA) offices in Palu, Central Sulawesi and Manado, North Sulawesi Province, as wel...