Inducible defenses are physical or behavioral changes that some organisms undergo in response to the presence of a predator. These changes may affect if a non-native species will successfully establish in a new location. This research will determine which signals from a Pacific Northwest crab predator trigger inducible defenses in the non-native purple varnish clam and if this response is innate or has developed since the clam's introduction.

A non-native species is a species that forms a self-perpetuating population in a region where it has not historically been found. This is very similar to an invasive species, the only difference being that invasive species cause some form of economic, environmental, or ecological harm after introduction. It is important to remember that any non-native species has the potential to become invasive depending on the circumstances.

Many factors determine if a non-native species will establish populations where they have been introduced, including interactions with native organisms. For example, a non-native species is more likely to establish if it can avoid being eaten by predators in their new range. One way organisms can reduce their chances of being eaten is though inducible defenses, which are physical or behavioral changes in an organism triggered by the presence of a predator or other risk cues. If a native predator triggers inducible defenses in a non-native species, that species should be more likely to survive, reproduce, and spread.

Despite the potential role inducible defenses may play in the successful
establishment and spread of non-native species into new areas, few studies have addressed this issue (Kimbro et al. 2009, Grason and Miner 2012). My previous work has shown that the non-native purple varnish clam, Nuttallia obscurata, will increase its burrowing depth (an inducible defense observed in other burrowing clams) in the presence of the Dungeness crab, Metacarcinus magister, a predator native to the Pacific Northwest (PNW). However, it is unkown if this response played a role in the initial establishment of the varnish clam in the Pacific Northwest.

Having found that Dungeness crabs trigger an inducible defense in the purple varnish clam, there remain two major questions that need to be answered:

To the best of my knowledge, this is the first study to examine how completely naïve populations of an established non-native species respond to cues from predators they encounter in their introduced range. By using completely naïve specimens, this study will provide insight into species interactions that occur when species are first introduced into new regions.

Other goals of this project, particularly determining which type of predator cues trigger inducible defenses, have been addressed by other researchers for other species. What makes my research unique in this regard is that they have never been examined for the purple varnish clam. Prior to this study there was no evidence that varnish clams possess inducible defenses, a phenomenon for which we now have documented proof. Through this project we will learn more about the behavior of this species and differences in behavior across geographic regions. If geographic origin significantly alters how the purple varnish clam responds to cues from a potential predator, then the source of clams may need to be taken into account when managing future introductions of the purple varnish clam.

Funds for this project will primarily be used to cover the costs of shipping varnish clams from native populations in Japan ($300) and introduced populations in British Columbia ($100), as well as fuel for specimen collection trips on the Oregon coast ($150). Once the organisms are collected I will need to house these organisms in the Marine Ecology Aquarium Lab at Portland State University. Since the lab has no source of natural seawater, I will need to make artificial seawater using Instant Ocean mix. I am requesting enough mix to make 600 gallons of saltwater ($150). To feed the organisms, I will purchase shellfish food for the varnish clams ($60) and frozen squid for the Dungeness crabs ($50). To cover the operating and transaction fees for this project, the host site takes a well deserved 8% of my target budget ($67). And finally, to keep my undergraduate assistants chipper on a rainy day in the field, I want to provide them with doughnuts from that well known symbol of Portland, Voodoo Doughnuts ($20). 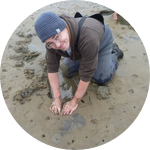 During my time as an undergraduate at the University of California Davis, I took a course on invertebrate zoology. Since then, I haven't been able to get enough of these spineless wonders. Whether it was my time spent as the outreach coordinator at the Bohart Museum of Entomology at UC Davis or as a research assistant catching crabs for scientists at the Bodega Marine Laboratory, I've spent most of my adult life working with these diverse and fascinating organisms. For my dissertation, I am studying non-native marine invertebrate species such as the European green crab, Carcinus maeanas, and the purple varnish clam, Nuttallia obscuratta, to examine what makes a species a successful invader. In addition to my research, I have a strong interest in science education and outreach. And nothing gets the attention of a bunch of 6th grade science students like a bucket of live crabs. It is my hope to contribute to our understanding of the natural world while engaging with the public.

Donation $5:
A electronic thank you note guaranteed to have at least one marine science related pun, plus a public thanks on Twitter from @dukeofcrabs (me).

Donation $10:
An electronic copy of the projects final publication and all previous rewards.

Donation $20:
A haiku for you,
written about the project,
plus prior rewards.

Donation $50:
Sponsor a clam! Name your clam and receive a photo, background info (size, place of origin), and updates on its participation in the project. Those who sponsor a clam will receive updates on the fates of all sponsored clams. You will also receive all previous rewards.

Donation $100:
Project puppet set! Get a set of puppets like those seen in the video (but new and improved) to recreate the research right in your very own home! Includes bonus European green crab and red rock crab puppets so you can test how clam response varies with different predators! See upcoming posts in the lab notes to see what happened when I ran those tests in real life. You will also receive all previous rewards.