We will acoustically tag bonnethead sharks in a South Carolina estuary to investigate space use and determine if the introduction of offshore wind farms could cause environmental displacement from this area. Our work will ensure that the sustainable energy from offshore wind farms will not adversely affect the marine environment. The bonnethead is being used as a model species and the findings will be used for protecting all coastal sharks, the marine ecosystem, and provided ecosystem services.

Sharks have a series of pores on their snouts and adjacent regions called the Ampullae of Lorenzini. The jelly-filled indentations facilitate prey detection and possibly, magnetic based navigation. We believe sharks use magnetic stimulus for navigation.

Offshore wind farms route energy to shore with submarine cables, which emit electromagnetic impulses. If sharks do use magnetic stimulus for navigation, these submarine cables could act as a roadblock to seasonal migrations of coastal sharks. We must delineate habitat use for the bonnethead shark. Subsequently, we will be able to determine if the introduction of submarine cables inhibits sharks from returning to this range.

Climate change is an ever-pressing issue in the modern era. With the advancement of technology, energetic sustainability is beginning to correlate with economic sustainability. Therefore, the feasibility of alternate energy is higher than ever.

While alternate energy appears to be 100% beneficial, that might not be the case. If the submarine cables from offshore wind farms act as roadblocks to shark migration, then it is possible that the animals will not reach the regions they typically occupy.

This could affect all other animals in the ecosystem as sharks are valuable members of the marine environment. The ecosystem services provided by our coastal regions, like fishing and healthy coral reefs, can be regulated by sharks -- they keep our oceans healthy and our wallets full.

For the long term, our project goals are to determine the environmental impact of offshore wind farms on coastal sharks. Before that can be accomplished, we must study a small population of sharks and regionally define their typical habitat. If we do not know what zones the sharks occupy without the presence of submarine cables, then we cannot know if environmental displacement is occurring.

After we have defined the sharks' typical habitat, we will conduct laboratory testing to determine if the introduction of the signals from submarine cables will inhibit the animal's annual return. This environmental impact must be determined before the federal government can lease land to private corporations for development. Funding this project will expedite the development of sustainable energy.

Any contribution to this project is greatly appreciated, regardless of value.

85% of these funds will go towards purchasing 10 acoustic transmitters. We are collaborating with the South Carolina Department of Natural Resources and the tags will be deployed during annual sampling, which will incur little additional costs.

The remaining 15% will be used to fund boat usage and purchase tagging supplies (consumables).

For this project, we will need ~50 transmitters. The transmitters that we are unable to purchase with the funds from experiment.com will be potentially secured through conventional grants and other funding opportunities. If we are lucky enough to exceed our funding goal of $3500, we will still use the funds to purchase transmitters. This means that you can still adopt sharks even if we go over $3500! 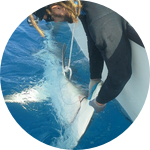 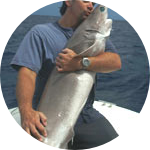 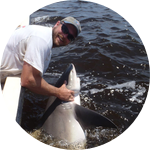 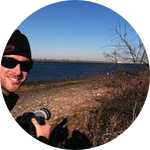 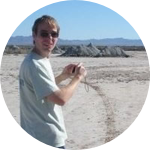 I hope that this project will serve as the first chapter of my Ph.D. dissertation. This experiment has fantastic potential, and after we determine the home range of these sharks, we will be able to mitigate the effect of wind farms on them. We can solve this problem before it exists!

I have 20+ years of experience studying shark ecology. My research includes the use of mark-recapture methods and modern telemetry techniques to acquire data on movement patterns, habitat use, and philopatry. This study will allow us to determine if an important renewable resource will have massive environmental consequences that will also impact the economic well-being of coastal societies.

I have worked for the South Carolina Department of Natural Resources for 14 years and have been principal investigator of shark surveys for the past 7 years. My research focuses on life history, telemetry, trophic ecology and population structure of coastal sharks. Our surveys will be used to help capture and tag bonnetheads at a minimal cost to the experiment.

My career is focused around shark behavior and magnetoreception. This project is unique because it is an interdisciplinary approach that will contribute to our understanding on how coastal modification (e.g., offshore wind farms and submarine cables) may influence shark navigation.

I am a trained geologist with experience in plate tectonics and geo-magnetism. This project is being proposed at a pressing time in an extremely relevant region. The benefits of offshore wind are monumental, but determining environmental impacts is of the utmost importance.

I grew up in Tucson, Arizona, part of the Sonoran Desert. People often ask how a kid from the desert could become so interested in the ocean and quite frankly, it wouldn't have been possible without my parents. I remember taking many trips to California to visit beaches and aquariums, visits that crafted my appreciation for marine life. The animals we saw were all mesmerizing, but I was far more intrigued by the mystery that surrounded them. Ever since, I have devoted my life to elucidating some of these mysteries!

14 Lab Notes Posted
Please vote for my video!
Shark migrations and much more!
Our tagged-sharks were successfully tracked throughout...

****NEW INCENTIVE*** $25: Receive pictures of a tagged-shark from our field work, a personalized certificate, and unlimited updates!

$300: Adopt a Shark! A perfect gift for a shark enthusiast? Yes it is! This is the cost of one acoustic transmitter. You or your group can name an individually tagged shark, and I'll send pictures and updates on how it's doing throughout the experiment, and everything listed above.

$900+: If you make it to South Carolina, I will take you on a shark-tagging excursion as a citizen scientist 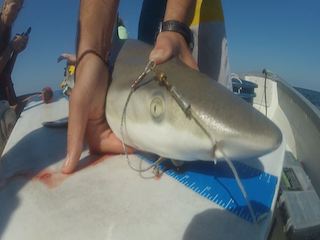 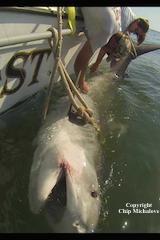 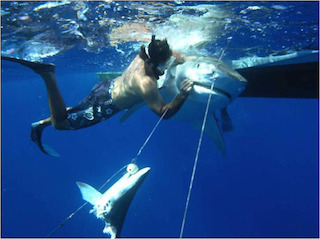 Our research often requires us to get up close and personal with sharks of all sizes. We are excited to keep you updated on these interactions as the experiment progresses. (P.S. The tiger shark on the right ate the smaller shark that you see and that's why it ended up getting hooked.) 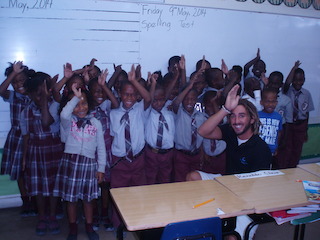 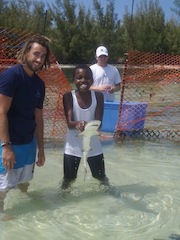 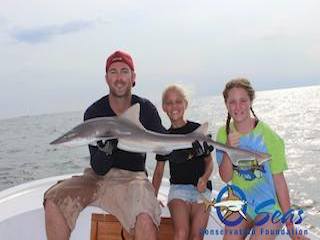 We always give outreach presentations during our field work -- we have even presented to every student in public schools on a small island. As you can see, 'hands on' learning is a fantastic option! During this proposed project, we will maintain the same level of communal involvement to further your dollar. 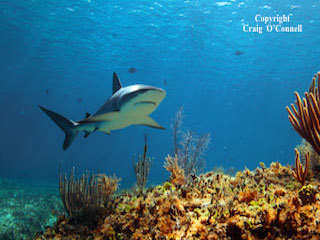 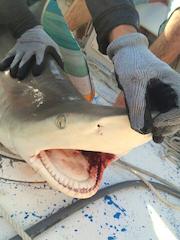 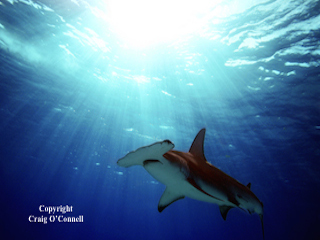 These beautiful creatures are potentially at risk due to the impending presence of offshore wind farms. By funding this project, you will help protect these sharks and all others like them. Thank you for your time.