Prostate cancer is the second leading cause of cancer death in men in the United States. Although the tumor may respond initially to hormone or chemo therapy, patients become resistant to these therapies and finally die. This research aims to provide glyco-therapy using edible source to prevent and treat prostate cancer metastasis. This therapy also boosts patient’s immune system, which is otherwise compromised during current treatment.

Prostate cancer (PCa) is the
second most common cancer and second leading cause of cancer death in men in the United States (National Cancer Institute Facts, www.cancer.gov). Hormone therapy is the treatment of choice in men with metastatic disease, but unfortunately most patients relapse to a fatal hormone-insensitive state (1). Moreover, aggressive tumor cells escape from host T-cell-mediated attack (2). As metastasis occurs through a series of steps such as tumor angiogenesis, intravasation of detached tumor cells from the primary site, tumor-endothelial cell interactions, and extravasation of tumor cells; blocking of one or more steps prior to metastasis could be an effective therapeutic strategy to prevent metastasis.

Interactions between cells or between cell and extracellular matrix are often mediated by lectins that bind to cell surface carbohydrates. One such beta-galactoside-binding lectin, galectin-3 (gal3) is involved in the progression of many cancers (3-5). We have recently shown that in prostate cancer gal3 promotes tumor angiogenesis, tumor-endothelial cell adhesion, and metastasis; and also evades immune surveillance through killing of infiltrating T cells (6). Particularly, tumor-derived (gal3 expressed and/or secreted by tumor cells) and tumor-independent expression of gal3 (e.g. on the surface of endothelial cells) can lead to enhanced tumor cell survival, invasion, and metastasis (6). The gal3 expressed by tumor cells, when retained in the cytoplasm, can lead to inhibition of apoptosis and enhanced tumor cell survival via stabilization of the mitochondrial membrane (4). When secreted by the tumor cell, gal3 can lead to indirect enhancement of interaction with endothelial and stromal cells via binding and polarization of glycosylated MUC1 leading to unmasking of smaller cell-cell interaction proteins on the tumor cell surface (7). Secreted gal3 can also signal through surface receptors on T-cells to induce T-cell apoptosis and immune evasion (6). On the other hand during tumor-endothelial cell interactions, endothelium gal3 participates in docking of cancer cells (6, 8). For this docking process, cancer cells-associated TF-disaccharide (TFD, Gal beta1,3GalNAc) plays a leading role by specifically interacting with endothelium-expressed gal3 (6, 8).

Why targeting gal3 with TFD-containing glycopeptide is important? Gal3 binds to exposed TFD (Gal beta1,3GalNAc), a
naturally occurring protein modification that is found exposed on most tumor cells. In normal cells, TFD is masked by sialic acid and cannot bind gal3 (6-8). Thus, the gal3-TFD interaction is relatively highly specific to tumors. In tumors, this gal3-TFD interaction plays significant roles in promoting cancer progression and metastasis (6-8). Increased surface expression of the TFD antigen with poorer prognosis in many cancers including prostate cancer implies that the TFD antigen is likely involved in cancer progression and metastasis (9, 10). As TFD is part of the tumor cells, the use of exogenous high affinity TFD-containing compounds such as TFD100 will specifically block the interactions of TFD with gal3. The Cod-derived TFD100 is a very potent gal3 specific binder. It binds to gal3 with picomolar affinity (6), and exerts a “multi-pronged” attack on tumors as described above.

Although prostate cancer may respond initially to hormone therapy or chemotherapy, it become resistant to these therapeutics at some point. Moreover, aggressive tumor cells escape from host T-cell-mediated attack (2).
Based on our compelling preliminary data (6) we hypothesize that the gal3 is a master regulator of cancer cell interactions with its environment and propose that specific inhibition of gal3 with TFD100 will suppress prostate tumor growth and progression by impeding angiogenesis and tumor-endothelial cell interactions, and by promoting anti-tumor immune response.

There are multiple benefits of this glyco-therapy. First, gal3-TFD interaction is highly specific to tumors as TFD is masked in normal cells. Second, the Cod-derived TFD100 is a very potent gal3 specific binder. It binds to gal3 with picomolar affinity (6) and so it takes minute amount of TFD100 to block interaction of gal3 with tumor cell associated TFD. Third, TFD100 exerts a “multi-pronged” attack on tumors (i.e. blocking of angiogenesis, blocking of tumor-endothelial cell interactions, and promotion of anti-tumor immune response). Fourth, TFD100 is obtained from natural and edible source (cod fish) and so is supposed to have negligible or very less toxicity. Fifth, TFD100 may enhance the antitumor activity of existing chemotherapeutics and probably will reduce the doses required for an effective elimination of tumors. Sixth, TFD100 alone or combined with chemotherapeutics will provide an ample supply of tumor antigens to the immune cells, thus promoting a robust immune response. Finally, as the TFD is abundant in the tumor cells and the gal3-TFD interaction is common to most epithelial cancers, this high affinity TFD100 can be applicable to treat other cancers.

This study, for the first time, will explore the therapeutic utility of a bioactive TFD-containing glycopeptide to inhibit prostate cancer growth, progression and metastasis, as well as mechanisms of its actions.

As described, we purified very potent gal3 blocker from cod (designated as TFD100) (6). But, there are bottlenecks to make this authentic TFD100 clinically useful drug. First, the purification of the TFD100 is laborious and time consuming and also its yield is very poor (~1 mg/kg cod). Clinical evaluation including pharmacokinetics (PK) and pharmacodynamics (PD) studies of TFD100 would require lot more sample at the gram level. Second, TFD100 is a big molecule (~100 kDa) and may not be suitable as a clinically viable drug. We believe that TFD100 is composed of several repeats of tripeptide
of alanine-alanine-threonine in which the last residue is glycosidically linked to TFD. Although in our mice experiments, intra peritoneally (ip) administered TFD100 seemed functional at nanomolar range, its biostability and bioviability remained unanswered. In order to make clinically useful drug, we might need to prepare similar glycopeptide of low molecular weight and validate its potential to block gal3 function.

For these reasons above, we plan to clone and sequence of TFD100 at various lengths, recombinantly express in eukaryotic system, and examine each glycopeptide for its potency to inhibit gal3 activity on solid phase assay and surface plasmon resonance (SPR) analysis as previously described (6). Once
we find the smallest glycopeptide, but characterized with picomolar affinity to gal3 (like TFD100), we will then perform PK and PD studies using a future funding for the development of clinically useful drug. Through cloning and recombinant expression processes, we will generate high affinity glycopeptide at desired length and yield. We have extensive expertise on cloning, recombinant expression and purification and so do not anticipate any problem to achieve this specific goal with the Microryza funding.

We are requesting $8,000 to cover the cost of reagents, media, and plastic consumable associated with cloning, sequencing, and recombinant expression and purification of TFD100 and other smaller TFD-containing glycopeptides. 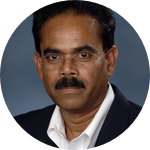 The primary goal of this proposal is to develop preclinical studies in support of clinically testing the utility of a highly potent and selective galectin-3 inhibitor for prostate cancer management. Dr. Ahmed (PI) has extensive expertise in protein chemistry, glycobiology, and molecular and cell biology and has been working on the basic and translational research of galectins. Current focus of his laboratory is to study (i) galectin regulation and function in cancer, (ii) development of high affinity ligands for galectin inhibition, and (iii) glyco-manipulation to study gene regulation in autophagy and apoptosis. He recently published the preliminary data relevant to this proposal in Proceedings of the National Academy of Sciences (Ref 6). He authored a book on protein chemistry (CRC Press) and edited a volume entitled "Glycobiology of Cancer" for the Frontiers in Bioscience. He is serving Editor-in-Chief of Glycobiology Insights.