The hypothesis is native oysters can be reestablished due to new freshwater flows to Biscayne Bay.

Oysters would provide much needed filtration to the waters entering the bay. This would be accomplished by breeding native oysters in a hatchery, then placing these young oysters at select sites. With time mature upstream oysters would send their seed down stream to colonize the most habitable sites. Improving bay resiliency against persistent algal blooms.

The August 2020 Fish kill hit Biscayne Bay, killing thousands of fish and hitting the ecosystem hard. Interestingly in all the discussion on water quality, oysters were not discussed. Biscayne Bay once had a oyster fishery in the North Bay to the 1920's and its population was described as luxuriant in a 1895 report

Persistent algal blooms have led to continued seagrass die offs. Oysters serve various ecosystem services and have an economic value to the communities they serve and protect, including cleaning waters and reducing turbidity for seagrass.

Algae also effects human health and access to recreational waters. Miami Water Keeper continually updates to the community on the safety of the bay waters for recreational purposes.

No oyster restoration projects have been executed using breeding techniques, according to a Miami-Dade Restoration Biologist, Josh Mahoney.

Typically an oyster restoration project helps set down substrate that baby oysters can attach to. In Biscayne Bay the current population is so low that this technique is not realistic to help build up a strong population.

With new freshwater flows being introduced to Biscayne Bay in 2012 via CERP and more scheduled. This is the perfect time to start building up a native population of oysters at select sites. Oysters mitigate and remediate harmful algae growth in the bay.

The goal of the project is to establish healthy native oyster populations at select sites including Deering Bay Estate.

This will be done by harvesting healthy and sexually ripe native oysters. These oysters will be bred at a hatchery. Used oyster shells will be collected from the local restaurants and hotels. These shells will be allowed to cure for 3 months outdoors to rid them of any foreign parasites and disease. Once cured the shells will be loaded in to mesh bags and taken to the hatchery to be seeded. Once seeded, the bags with baby oysters will be set at select sites. With time these upstream populations will mature help seed downstream oysters.

Salinity is monitored using 2 DBHYDRO Stations on the bayside, Salinity conditions will be based on oysters survival.

The main cost is to have the oysters bred in a hatchery, This would allow us to give a boost to natural populations and allow these native oysters to reclaim habitat. Between 100k and 1 Million baby oysters will be grown depending on native oyster fertility.

There are a number of permits that must be received to activate the project. Those parties to date are FWC, DERM, SFWMD, Biscayne Bay Aquatic Preserve, and a State Permit. I have am currently being guided through this process by professionals in the community.

Oyster substrate is critical as baby oysters need a place to attach to. Typically this is other oysters. Due to low wild populations, oysters that make it to the larval phase and cant find suitable substrate to attach to simply die. Adding substrate such as oyster shells in bags or hanging from docks, down stream will help the this habitat restoration exponentially as the larval oysters will have place to grow into adults.

I endorse this project wholeheartedly and passionately. Biscayne Bay holds such significance to myself, my family and so many of my friends. It is to me the most significant interaction I have with nature on a regular basis. I fish, I paddle, I swim and I follow the season through the wildlife on the bay. The fish kill this year broke my heart so deeply as it did so many others and I greatly see the importance of this project as a catalyst to rejuvenate the bay after so many years of neglect. 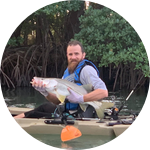 The project timeline is based on the natural cycle of the oyster. Mating sexually mature native oysters within the proper timeline will make a big difference on results of the project.

Set oyster shells as substrate in bags and on lines 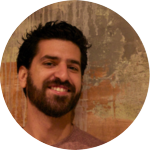 I would like to take the time to thank those that have guided me through this process such as members of University of Florida, Florida International University, NOAA Habitat Scientist, Miami-Dade County Restoration Biologist, and Florida Sea Grant.

This project is only a small piece of the bigger community effort to help strengthen Biscayne Bay, Thank you to all those involved in Biscayne Bay Marine Summit and Biscayne Bay Task Force.

I was raised in the waters in and around Biscayne Bay spearfishing, snorkeling, shrimping, fishing, sandbars getaways, and wakeboarding. My hope is that my children and future generations have access to the beauty and bounty of the bay as I have.

I earned my Master in Public Health in order to work with people who were connected to the land. That led me to citizen science projects such as the BP oil spill in New Orleans, building wind turbines for unelectrified communities in rural Peru, as well as working to source tea from organic and regenerative tea farmers in India, Nepal, Japan.

A growing community has been forming around Biscayne Bay for the past number of years and this work is my contribution to the bigger community.