Would you or a loved one someday benefit from a life-saving medical implant? However, the organisms adapt to these 'beneficial intruders' differently. Besides implants' intrinsic properties, also the age, gender, genetics and health of the recipient, all contribute to the body’s reaction to implants. We are developing a blood-based assay to study the response of the body to solid inorganic implants, for diagnostic and prognostic purposes.

Solid implants, either passive (prosthetics, replacements, tissue engineering constructs) or active (bio-sensors, drug delivery systems, encapsulated cells), are increasingly used in medical applications. However, their integration with the tissues and/or functionality is hampered by the 'foreign body reaction', a form of internal wound healing. While the local cellular mechanisms are relatively well understood, the distant ones, propagated through the blood, were much less explored. We recently discovered that blood cells gene expression profiling, performed with either high-throughput methods such as gene micro-arrays or at single cell level (as in the background image) is very sensitive to physiological and pathological status of the organism, including its response to implants.

It is known how the body reacts to implants at the local level, but what happens in the rest of the organism? Can an implant (possibly carrying cells or active molecules) in one part of the body affect other regions? Moreover, can we monitor this response from the blood, for example? The project could add crucial information to the basic mechanism of body's reaction to the implant (and vice-versa), as well as could help developing a blood test for how this reciprocal interaction progresses. Methodologically, the project is an extension of our novel approach to detect circulating stem/progenitor cells with a tissue-repairing function in the blood based on their transcriptional (gene expression) signature, combined with a systems-biology inspired analysis (PlosONE, 2014, 9(4):e951242014),

The goals of this experiment are:
1. To measure the messenger RNA extracted from mouse blood samples by quantitative Real-Time Polymerase Chain Reaction (qRT-PCR).
2. To analyze how active are, and how compare to each other, the specific genes reflecting mobilization in the circulation of bone-marrow cells in response to the tissue injury produced by implantation, and to the continuous local tissue 'irritation' afterwards. The blood samples to be analyzed were already collected from experimental animals carrying model implants (similar to the oxygen sensors described in our previous study Tiss. Eng., 2007, 13(8):2053-61, improved by the addition of a micro-porous polymeric surface).

The current funding shortage prevents us from performing a few final gene expression measurements. The money is needed to purchase the reagents and consumables necessary for quantitative real-time PCR. All the other elements to successfully compete this study are available in our Lab. 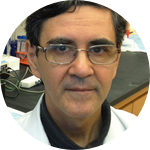 Dr. Moldovan’s research interests are in Regenerative Medicine (mainly the identities and functions of circulating stem/progenitor cells) and Tissue Engineering (neovascularization of the peri-implant space). He has been working in the Dorothy M. Davis Heart and Lung Research Institute since its inception in 1997, being recruited from Johns Hopkins University (where he was a Post-doctoral Fellow in Cardiology). At Ohio State, Dr. Moldovan organized an International Symposium to address the emerging roles of blood-derived progenitor cells in neovascularization (see the images below).

Dr. Moldovan recently completed an NIH-funded study on how to improve the integration of biosensors with the tissues, and one intended to develop a better method for detection of the circulating stem/progenitor cells. This new assay provides fresh information about these cells’ functions and perturbations in cardiovascular pathology, and it is now being applied to the study of body’s response to implants.

Our new systems biology-based method of blood sample analysis, able to detect the gene signature of circulating stem/progenitor cells with a role in internal repair, was recently featured by several media outlets: 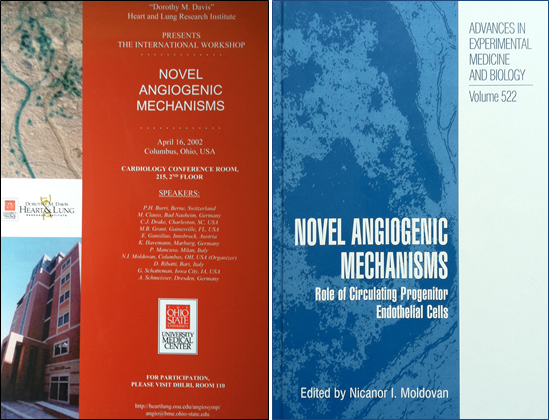