Pitcher’s thistle is a rare native plant that is found only one place in the world; the sand dunes of the Great Lakes. The invasion of a seed-eating weevil further threatens the plant's extinction. We will conduct a mark-recapture study to learn more about weevil dispersal and test the use of sticky, 3-D printed decoy flowers as a management strategy. This study has important implications for Pitcher's thistle conservation and invasive insect management.

Pitcher’s thistle (Cirsium pitcheri), is a federally-threatened native plant that is one of the only sources of nectar to pollinating insects along the sand dunes of Lake Michigan. Although facing many threats, this plant is also the victim of a biocontrol-gone-wrong story (Havens et al. 2012). The invasive Larinus carlinae weevils (formally L. planus) were initially distributed in the US to control weedy thistles. Sadly, they are not very good at stopping weedy thistles and readily attack native thistles (Louda and O'Brien 2002), including the rare and charismatic Pitcher's thistle. In early summer, the "evil weevils" chew holes in the unopened flower heads where they lay their eggs. The developing larva eat the developing seeds, preventing the plant population from growing.

Although the Larinus weevils have been in the US for several decades, they have only recently invaded Pitcher's thistle populations along Lake Michigan. The weevils have greatly increased the threat of extinction for the rare plant, but we are learning important information that we hope can be used to help manage the invasive weevil and conserve the plant, especially in places where the weevil hasn't arrived yet. Our previous research identified areas of the dunes that are more susceptible to weevil attack (Hakes et al. 2018). Weevils are attracted to thistles located at lower dune elevations and in cooler, grassy-areas. It's time to use that knowledge against them! The grassy areas of the dune where weevils are naturally prevalent are the perfect place to test our traps.

The goals of this project are to 1) better understand how weevils move, find, and select host plants in the dunes, and 2) test the efficacy of using decoy flowers as weevil traps. We know from earlier experiments that the grassy areas of the dunes are where weevils are most prevalent and that grasses may help them get to the host thistles. We don't know how often and how far weevils disperse from plant to plant. By giving each weevil a unique paint marking, we can survey how much they are moving in the dune community. For our second goal, we will place 3D printed decoy plants treated with tangle-foot in the grassy areas where weevils are dispersing. This will test whether visual cues of the host plant are enough to trap weevils. If effective, this management strategy can be amplified.

Transportation by car to the field site is the largest expense but necessary for field research. Because the plant is federally-threatened and takes seven years to flower, it is not logistically possible to conduct this research on campus.

Paint pens are used to mark weevils on their elytra, and we have found through earlier studies that the paint lasts several weeks and does not inhibit flight. Marking insects will allow us to study their dispersal patterns. Tangle-foot will be used to make the traps.

I have access to a 3D printer at my university. I request money for expendable printer materials to make decoy flowers. Ideally, we will make a few prototypes to test which are more effective at trapping weevils and minimizing unintended captures.

Pitcher's thistle is critical to bees early in the spring/summer as one of few pollen sources. Helping the thistle is helping the bees. Dr. Hakes and her students are so hard-working and passionate in this study, this is certain to get results. 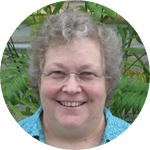 Cindy Duckert
Istructor of Biology
Lawrence University
Alyssa Hakes and her team have been doing exciting work on this system for years. Their studies use innovative approaches, like this one, to show how this invasive weevil is affecting this threatened species. I'm sure the studies will be productive and provide solid scientific information that will help both managers and scientific researchers. 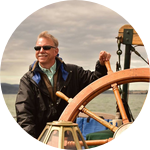 June 10 - 24. Our scheduled field research trip coincides with peak weevil activity. Set up experiment at field site and survey marked weevils and traps every day. Weevils tend to oviposit before flowers open (our decoys will look like unopened flower heads). By conducting our experiment at this time, we will be less likely to trap pollinating insects. 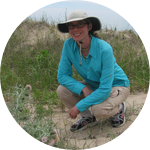 I am an ecologist who studies plant-insect interactions. I am fascinated by the question of why some plants in an area are highly attacked by plant-eating insects, while other plants of the same kind seem to escape damage all together. My lab aims to figure out the factors that determine variability in invasive insect damage to a native plant with high conservation importance.

My interest in insects goes way back to the first periodic cicada emergence I experienced in 1990 (shout-out to Brood 13!). I collected a box-full of cicadas that I kept in my closet and I brought the cicadas to every "show and tell" for several years.

My interest in plants stems (pun intended) from my Girl Scout Gold Award project that I completed in 1999. I built a wildflower nature trail at a local county park and learned that plants were far more interesting than they are often given credit for.

I attended the University of Illinois Urbana-Champaign as an undergraduate and received my Ph.D. at Louisiana State University. After a postdoctoral fellowship at Florida State University, I began teaching at Lawrence University in Appleton, Wisconsin. Lawrence University is a primarily undergraduate institution, which means that students are involved in all aspects of this research. My lab has been studying the Larinus weevil and Pitcher's thistle system along the Lake Michigan dunes in Door County since 2013. You can read our recent paper in the open access journal Global Ecology and Conservation https://doi.org/10.1016/j.gecco.2018.e00376

It's a trap!
3-D flower buds are coming along nicely

Every year my lab obtains proper permits from the Wisconsin DNR to conduct this research at Whitefish Dunes State Park. 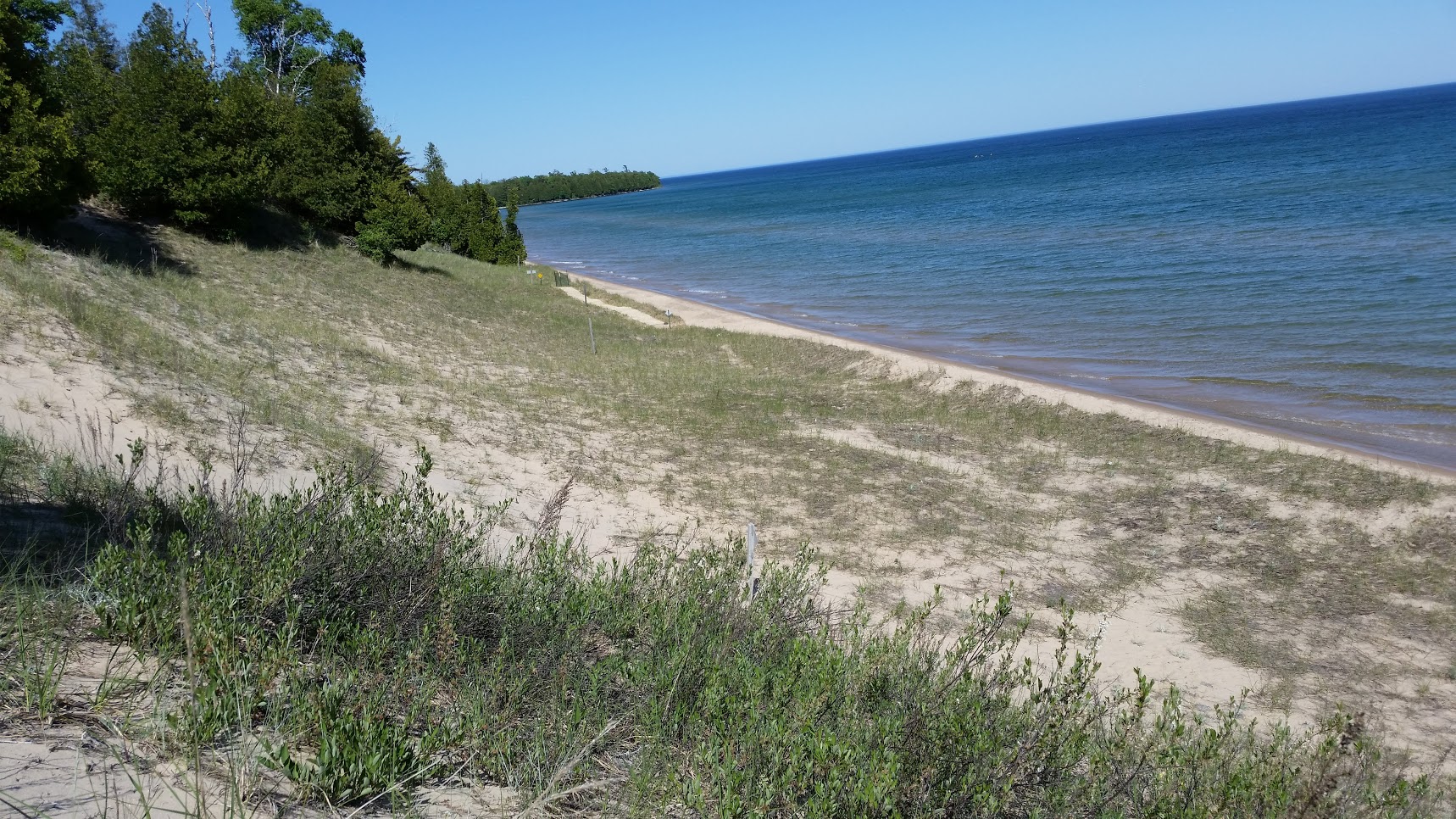 A permit application to the DNR has been submitted for this summer and we will not begin work until approved. Lodging for this research is generously supported by Lawrence University, which has a north campus near our Door County field site. This helps keep the cost of this important conservation research affordable. Results from our work are shared with the DNR, Door County Land Trust, and colleagues working to protect Pitcher's thistle all across Lake Michigan. Conservation requires teamwork; thanks for supporting our team! 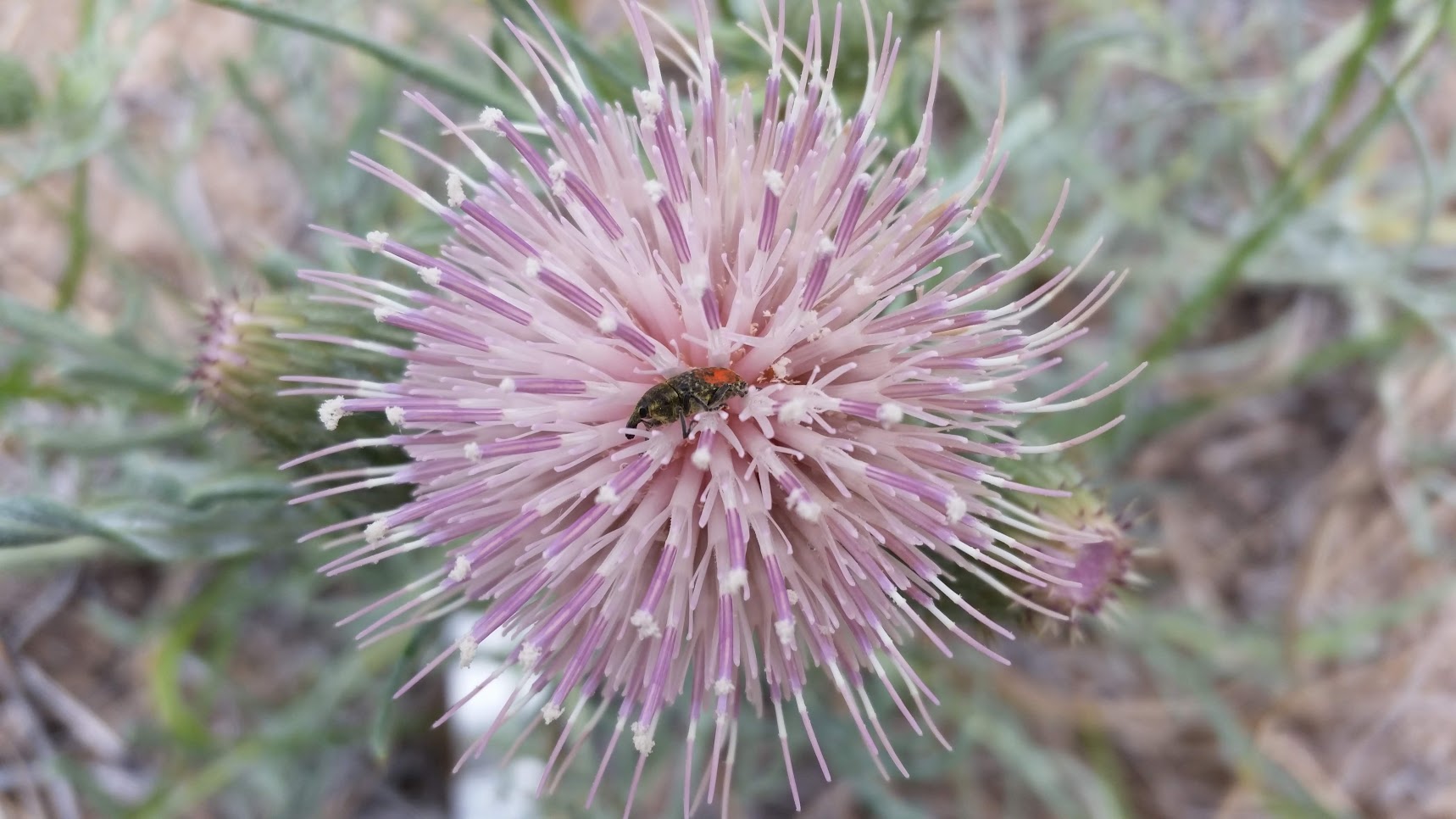