White nose syndrome is an epizootic epidemic (large outbreak affecting a certain animal group), caused by a cold-loving fungus called Pseudogymnoascus destructans (Pd) (formally called Geomyces destructans), that has been decimating North American bat populations that hibernate since its arrival in the United States around 2005. The fungus infects the hair follicles and skin of bats, causes the animals to arouse from hibernation and waste critical energy reserves at a time when they cannot be replaced. This leads to dehydration due to skin damage. In addition, the bat's immune system over-reaction (Meteyer, et al, 2012) to the fungal infection during spring emergence causes wing and tail membranes to thin and become fragile which reduces the bat's ability to forage and increases mortality.

BATS Research Center pioneered the use of ultra violet (UV) light to visualize the fungus in the earliest stages of development - long before the previously accepted clinical symptoms become evident. Our research has determined that the fungus has a unique "signature" under UV light that no other fungus or mold exhibits. That finding allows us to easily visualize the fungal colonies in the field as well as in the laboratory.

We have also found that post-white nose syndrome bats display a unique fluorescence of wing and tail membranes when exposed to a specific wavelength (368 nm - long wave) of UV light. That fluorescence is different from the fluorescence exhibited by the fungus and it often changes color, intensity, and patterns over weeks or months. Of the 1,300 bats we have followed, it was noted that not all the bats (of the same species) fluoresce when in hibernation. From observations made using UV at maternity colony banding sites we saw that juveniles had a "unique" wing presentation (not only a lack of fluorescence but also a "velvet" appearance) that adults do not have. From those findings we believe the non-fluorescent bats seen entering hibernation are juveniles that have not yet contracted the disease. In comparison, a multi-cave and multiple-species UV survey done in cooperation with the Illinois Fish and Wildlife Service in November of 2012 (a pre-white nose syndrome state at that time) produced no fluorescence in any of the bats examined. We hypothesize that the background fluorescence seen in known adult post-white nose syndrome bats is a product of the bats' reaction to the fungus and seek to support this idea by photo-documenting bats with UV light from a non-white nose syndrome infected area in Colorado to establish a control. If bats in the Colorado caves do not exhibit fluorescence similar to what we have observed in NJ and PA, then we evidence to support that a systemic and/or immune system response creates the fluorescence in bats after contracting the disease.

The rapid expansion of documented white nose syndrome-affected sites and the high level of mortality (95% to 98% of most species) observed in those hibernacula have elicited a global concern for the future of species susceptible to the disease. The disease is thought to be an "import" from Europe and was first identified near Albany, NY in 2005-2006. Since then, it has spread into Canada and as far west as Oklahoma while killing millions of bats as it progresses - with no cure and no end in sight. Native bats are critically important ecosystem service providers because they keep a variety of insect pest populations in balance. The bats dwindling numbers will result in vector-borne disease proliferation, an increase in crop losses, and skyrocketing economic costs with impacts at all levels.
We have been conducting intensive studies of NJ bats in cooperation with the NJ Fish and Wildlife Service Endangered and Nongame Species Program since the disease invaded the area in 2009-2010. Since 2010, we have banded over 1,300 bats to better track them as groups or individuals, as well as identify environmental conditions that support bat populations, and determine survival rates. We do have survivors from 2010 (as well as others from each following year) who have been counted during pre-emergence surveys conducted each spring. As part of these projects, we used UV light to follow the disease progression over the hibernation period and the healing process after emergence. We have photo-documented our findings and from those studies we have complied a large archive of photographs that are shared with other researchers worldwide.
The implications of finding a difference in UV fluorescence between WNS-exposed and non-WNS exposed bats can be far reaching since this information may alter both current understanding and approaches to the deadly disease. Having an effective field tool will better enable other researchers to understand the fungal involvement and spread, the bat's reaction to the illness, and will allow scientists to use a simple method to identify the infection. Additionally, this research will hopefully provide a non-lethal research tool to identify bats that have been previously exposed to Pd and have survived.

Permission has been obtained from the Fish and Wildlife Service in Colorado (a state well outside the known WNS impacted areas) to conduct cave surveys of their bats and obtain photo-documentation under UV light to determine whether-or-not they exhibit fluorescence. The implications of such a finding can be far reaching since this information may alter both current understand and approaches to the disease process. Having a effective in-field tool will better enable other researchers to understand both the fungal involvement and the bat's reaction to the illness.
We will also conduct a workshop on the use of UV light to detect WNS in bats for area biologists, bat researchers, Fish and Wildlife Service managers, and US Geological Service personnel in preparation for the inevitable arrival of WNS in their area. The workshop will provide sufficient background information, methods/techniques, and equipment needs to enable personnel to easily utilize UV light as a research tool and successfully identify WNS infection in bats.

The proposed budget is based on direct costs to conduct this research. The researcher draws no salary and only expenses are covered. The results of this trip will drive further research which will expand out to include facilities who have the ability to delve into the bats endocrine system and determine what is causing the fluorescence we observe.
Equipment used for this trip must be new so there is no chance of cross-contamination between infected and non-infected areas. 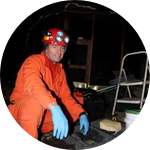 John Gumbs (principal researcher) is a caver, cave rescue, technical rope rescue, and abandoned mine rescue provider. Has 23 years experience as a licensed wildlife rehabilitator (specializing in raptors and orthopedic surgery), works in an emergency room, and is self taught in wildlife and biology. Has worked with bat biologists for 10 years, and due to a fluorescent mineral background, came up with the idea of using UV to investigate Pd.

I have been involved with wildlife since I was a child with an interest in all things. I became a licensed wildlife rehabilitator specializing in raptors for 23 years. I did surgical fixation of long bone fractures and pioneered the use of plastic intramedullary pins for avian repair. Over the years I became a caver (of course there were bats in caves), cave rescue instructor, technical rescue instructor, and SAR provider. I became involved with bat researchers as a consultant (trying to keep people from killing themselves in caves and abandoned mines) 10 years ago and have been involved ever since. Because I have a background with fluorescent minerals, I pursued the idea of using ultra violet (UV) light to visualize the fungus (Pseudogymnoascus destructans) that was killing bats - and it worked. I pioneered the use of UV light and developed photo-documentation techniques to be able to compare photos from different researchers. Working with the NJ State biologist and other affiliated people, we have banded over 1300 bats in and around our major hibernaculum, followed the WNS disease process and healing both with white light and UV, and have worked with many collaborators from various universities/research groups. My wife and I started BATS Research Center in 2010 (a 501(c)3 corporation) to continue research into the various and yet-to-be-identified aspects of WNS. Email is batresearch@yahoo.com .