Bats are one of the most prolific and ecologically important groups of mammals on the planet, but they are often maligned as "flying disease vectors" due to the numerous pathogens they can carry, including rabies virus. Our project will investigate a new vaccination strategy by "dusting" several bats with the VRG oral rabies vaccine, releasing them in a colony, and then testing the colony for transmission and efficacy of the vaccine by grooming behavior.

Bats are known carriers of many pathogens, including some that can infect humans, such as rabies. These flying mammals are vital to our ecosystems, but are often targeted for destruction to mitigate the spread of disease. The goal of this project is to find a means of vaccinating the bats that utilizes bat colony behavior to help spread the vaccine. Several oral rabies vaccines have been successfully deployed in wildlife populations and show potential for efficacy in preventing bat rabies experimentally. Our study will test if dusting a few bats with RABORAL V-RG® vaccine and releasing them back into the colony will allow for bat grooming and close contact behavior to spread the vaccine to other bats.

Rabies is an age-old disease that still accounts for approximately 59,000 human deaths annually and countless animal deaths according to the WHO. The goal of global eradication of rabies is going to require a concentrated effort to eliminate the disease from animal reservoirs, notably bats. Oronasal vaccination of bats shows promise as an effective method of rabies prevention but delivery of a vaccine to bats in the wild poses a significant challenge. If we can demonstrate that bats themselves can be used to help spread the vaccine, we can provide a tool to the wildlife community that could significantly alter the role that bats play in perpetuation of rabies and potentially other pathogens in nature.

Our hypothesis is that dusting bats with a concentrated powdered form of the oral rabies vaccine and returning them to their colony will trigger the spread of the vaccine from bat to bat through normal grooming and roosting behavior. We will trap 25 bats in Jul/Aug, 2019, obtain a blood sample to test for existing rabies antibodies, and habituate them for three weeks in our animal facilities. We will then vaccinate 5 bats by dusting them with concentrated oral rabies vaccine and releasing them back into the room with the remaining contact animals. Serum will be tested for antibodies one month following vaccination, at which time bats will be challenged with rabies virus to test for vaccine protection in the bats. The survival study will last up to 6 weeks to confirm protection.

Animal care is essential for this project. Bats will be housed in an approved laboratory and cared for by experienced personal. We will use Eptesicus fuscus bats, which are insectivorous and require a diet of live insects. The costs for feeding, housing and caring for 25 bats over the course of the three month study is $25/day for 90 days for a total of $2,250. Lab disposables include gloves, swabs, needles and syringes for collecting blood, and serum vials, and we estimate these costs at $1,000 for the duration of the study. The vaccine and antibody testing supplies will cost approximately $1500, which includes a fluorescent labeled antibody to test for bat antibodies against rabies.

Angela Bosco-Lauth is a fantastic scientist, and this is a highly relevant, well-designed study. She is willing to pursue difficult questions such as wildlife vaccination using innovative approaches. I am very excited to see the results of this study! 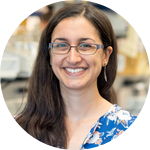 Nisha Duggal
Assistant Professor
Virginia-Maryland College of Veterinary Medicine
I have had the pleasure of collaborating on several projects with Angela Bosco-Lauth over the past several years. She is an innovative scientist and often conducts unique and clever experiments. This proposal is no exception. If successful, the proposed vaccination strategy could help reduce the burden caused by rabies virus in humans and wildlife. 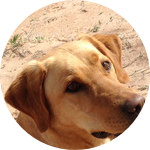 Vaccinate (dust) 5/25 bats and release back into the colony.

One month post-vaccination, collect blood to test for anti-rabies antibodies and challenge all bats with rabies virus.

Antibody and survival data will provide insight into the efficacy of the proposed vaccine protocol and pilot data for possible field trials. 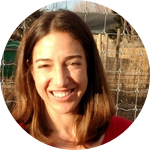 Our team has decades of experience working with bats and bat-borne diseases, including rabies. Our passion is understanding infectious diseases of animals and humans and trying to find ways to mitigate the impact and spread of disease within and between species. We understand the inherent difficulties in preventing infections in wildlife and are working hard towards finding methods of vaccination that are minimally invasive yet still effective.

I can't remember a time when animals haven't been a major part of my life. I grew up in a family that loves pets and cherishes wildlife and open spaces. My dream was to become a veterinarian and treat sick animals, especially horses, but when I got to college, I realized that wasn't going to work for me- I wanted to think a bit bigger. I started working in an infectious disease laboratory right about the time that West Nile virus was speeding across the U.S., and I was terrified that such a deadly disease could befall my beloved horses. When I got the opportunity to work with the people who ultimately developed and licensed the first equine West Nile vaccines, I knew I'd found my calling. Fifteen years later, and armed with a PhD in Microbiology and a DVM, my passion to help animals by developing and testing vaccines has led me to where I am today. So many infectious diseases are transmitted between humans and animals, and I believe we must find ways to protect all species from disease, not just those in our homes and backyards. Furthermore, by finding ways to prevent infectious diseases in wildlife, we can protect them not only from illness but from being destroyed as a means to prevent spread to humans. Sustainable practices for disease mitigation are my passion, and my goal in starting this experiment.