Alzheimer’s disease (AD) is associated with prion-like aggregation of the β-amyloid and Tau proteins, that form neurotoxic aggregates in the brain. Studies have pointed out the association between brain-localized bacteria and AD; however. Recently, we identified that bacterial DNA can aggregate Tau protein (Tetz et a, 2020). We will explore whether DNA from brain-localized bacteria triggers β-amyloid misfolding; thus, being, a previously overlooked cause of AD.

Developing a novel anti-AD drugs is limited by the lack of a clear understanding of the seeding factor that triggers the cascade of AD, and is reflected by the numerous failures of anti-AD drugs in the clinical trials.

Numerous studies have pointed out the association between brain-localized microorganisms and their virulence factors and AD; however, their exact mechanisms of action remain unclear. Recently, we discovered a new pathogenic role of bacterial extracellular DNA as a virulence factor in protein aggregation. Here, we are taking a new approach, evaluating bacterial extracellular DNA that is present in CSF and postmortem brains of individuals with AD as a novel therapeutic target for the prevention and treatment of AD.

AD is the most common cause of dementia worldwide and is a leading cause of death in elderly in the developed world, impacting many of our loved ones.

We launched this project because our previous data proved bacterial DNA engagement in aggregation of Tau protein that is another AD-associated protein (Tetz et al 2020). Given the central role played by misfolded β-amyloid in AD it is critical to clearly identify the seeding factor that triggers the cascade of β-amyloid misfolding (Chimon et al 2007). Our discovery that bacterial DNA could play a role in β-amyloid misfolding will pave the way for the future translational potential of this discovery to fight AD and would become a new frontier in AD research.

The ultimate goal of this project is to prove that bacterial DNA isolated from brain-localized bacteria could induce the seeding of Aβ misfolding. Extracellular DNA will be extracted from the matrix of different brain-localized bacteria. To prepare aggregated β-amyloid for seeding experiments, monomeric aggregate-free β-amyloid will be used (Soto et al 2015). For these studies we will incubate monomeric β-amyloid with DNA of different bacteria and measure Thioflavin T (ThT) fluorescence as a function of time in the ThT assay. We will also study the dose-dependent effect of DNA from certain bacteria on Aβ aggregation. Results will be published and will be made available to the whole scientific community. Results will serve as pilot data for future grant applications

The ultimate goal of this project is to prove that extracellular bacterial DNA isolated from brain-localized bacteria could induce the seeding of Aβ misfolding. Extracellular DNA will be extracted from the matrix of different brain-localized bacteria. To prepare aggregated β-amyloid for seeding experiments, monomeric aggregate-free β-amyloid will be incubated as described previously (Soto et al 2015). For these studies we will incubate monomeric β-amyloid with DNA of different bacteria and measure Thioflavin T (ThT) fluorescence as a function of time in the ThT assay. The budget will cover the cost of reagents, publication cost and some salary for the extra work to people involved in this project.

I am deeply excited about this study as it is investigated a very novel area of Alzheimer's research looking at how brain-localized bacteria might trigger protein misfolding. Dr. Tetz has a history of multiple successful projects with a publications in the top-tier scientific peer-reviewed journals and is well respected for his knowledge on the microbiome and innovative approaches. I eagerly await the results of this important research project. I highly endorse this exciting project! 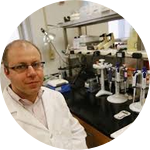 The Human Microbiology Institute has established all the methodologies for this study and is ready to move forward very quickly. We will have several deliverables for donors paired with the timeline of the project. Every week an update will be posted with respect to the project, the goals achieved. Lab notebooks will also be available, and will contain some raw data and scientific successes. 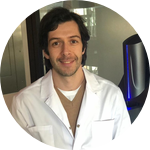 I have 18 years of experience in microbiological research and drug development with numerous publications.

My research studies the role of cell-free DNA in different human pathologies. I discovered novel regulatory pathways linking gut-microbiome, cell-free DNA to cancers and neurodegenerative diseases. My latest research uncovered bacterial extracellular DNA as novel virulence factor and for the first time showed a universal pathway of its possible implication in triggering diseases associated with prion-protein misfolding. The discovered previously unknown role of bacterial extracellular DNA is not related to protein-coding and is realized by modification of already synthesized proteins, converting them into an altered heat-resistant Tetz-proteins or leading to their aggregation in cross-β structures [Tetz et al, 2020, Tetz et al 2019]. The key milestones in this discovery were that bacterial extracellular DNA can trigger Tau protein misfolding in Alzheimer’s disease models [Tetz et al, 2020]. To conclusively unravel all the particularities involved in the proaggregational role of bacterial DNA and to pave the way for future translational potential of this discovery my work focuses on studying bacterial DNA as a novel virulence factor in different diseases associated with protein misfolding.