Although Lyme is considered to be endemic only in Europe and the northeastern and midwestern United States, people throughout the US and the world are suffering with this debilitating illness. This research seeks to find out how common it is for birds in the wild to be carriers of the Lyme disease bacteria which would shed light on their role in the spread of Lyme via their movement and migrations.

Recent evidence demonstrates that wild birds are capable of and are actively transporting ticks and their associated diseases geographically during migrations (Anderson and Magnarelli 1984; Comstedt et al. 2006; Hamer et al. 2012). Further, research has also shown that a number of species exhibit reservoir competency, meaning that they are able to contract Borrelia burgdorferi infection and transmit it to uninfected ticks that parasitize them for a blood meal.
Since ground-feeding species such as northern cardinals, gray catbirds, song sparrows, and American robins spend significant time foraging for food at the optimal questing height for ticks, they are excellent opportunistic hosts, and have all demonstrated the ability to infect larval ticks with the Borrelia upon their first blood meal (Ginsberg et al. 2005). Additionally, birds with latent Borrelia infections and bacteria at undetectable levels can experience an infection reactivation when exposed to stressful situations (e.g. migration, lack of food, predators), once again positioning them in a role to transmit the pathogen to parasitizing ticks (Gylfe and Bergstrom 2000). The evidence for a significant avian role in the ecology of Lyme disease-causing pathogens is strong.
For this project, we seek to establish whether or not different species of birds in New Jersey, a human Lyme infection hotspot reporting over 3,000 cases of Lyme per year, are actively harboring Borrelia burgdoferi sensu lato (NJ DOH 2012). We will be collecting both blood and tick samples from birds that will be analyzed for Borrelia DNA via polymerase chain reaction (PCR) to determine if these animals have ever been carriers of the disease. We have chosen to examine native populations as well as migratory species because research has shown that residents can maintain tick populations (Anderson and Magnarelli 1984), and thus could be harboring the ticks that contribute to the high levels of disease presence seen in the human population in this area. It is also crucial to determine the presence of these bacteria in New Jersey's migratory populations given the importance of NJ as a stop-over location.

Lyme disease is one of the fastest growing and is the most commonly reported vectorborne illnesses in the United States with estimates of 300,000 people infected annually (CDC 2013). Lyme is an incredibly complex illness that classically first presents with flu-like fatigue, joint and muscle aches, and the "bulls-eye" rash. It is usually cured if caught in this early stage. However, less than 50% of people infected with Lyme report noticing a rash (which isn't always a "bulls-eye"), and the flu-like symptoms can be mild or nonexistent. Disseminated and late-stage Lyme disease can present in a myriad of ways including facial paralysis (Bell's palsy), neurological problems, gastrointestinal issues, cardiac manifestations, and psychological conditions. Often, because these signs and symptoms are so diverse and vague, people infected with Lyme are misdiagnosed with conditions like chronic fatigue syndrome (CFS), fibromyalgia, Alzheimer's, amyotrophic lateral sclerosis (ALS), and multiple sclerosis (MS), delaying their antibiotic treatment and making overall treatment far more difficult. Untreated, Lyme can be debilitating and even fatal. Routine blood tests for Lyme only search for antibodies, not the actual pathogen, so results are often inaccurate and unreliable (ELISA is less than 50% sensitive). Currently, only the Northeastern US and Europe are considered to be endemic and western and southern states, and other countries are often thought to be "free" of Lyme disease. Since It is a difficult disease to diagnose as well as treat, it is crucial to understand every aspect of its ecology, that is, how the disease interacts with and is spread via animal hosts. If we find that birds in New Jersey are actively carrying the bacteria, it provides further evidence that this disease is very easily capable of being spread both locally and long-distances, i.e. to other states and countries. Lyme disease has become a very public and political issue due ultimately to a lack of research, so we feel that this is a great question to investigate right now. The project is also a personal one; those of us on the research team have be infected with Lyme on a number of occasions, and know many others that have been sickened with this illness.
Please see the following links for more information on Lyme disease:
Lyme Disease Association: http://www.lymediseaseassociation.org/
Basic Information about Lyme Disease by International Lyme And Associated Diseases Society: http://www.ilads.org/lyme_disease/about_lyme.html
Lyme and Tick-Borne Diseases Research at Columbia: http://www.columbia-lyme.org

The funds raised will go directly to purchasing field equipment for collecting tick and bird blood samples during the summer and fall. After field samples have been collected, the funds will also cover the costs of the laboratory component of the project. We will be analyzing blood and tick samples for the Borrelia bacteria by use of polymerase chain reaction (PCR).

This budget will cover the costs of the field and laboratory materials. 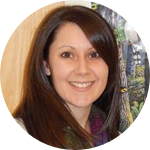 I am a full time graduate student studying ecology and evolution at Montclair State University, in Montclair, NJ, and will be serving as a graduate teaching assistant come this fall. In addition to my roles as a student, I recently interned with Conserve Wildlife Foundation of New Jersey. Our projects included ranavirus sampling, bat acoustic monitoring, as well as public outreach and intervention in cases where bats have roosted in homes and private buildings. My research interests are diverse, but birds and zoonotic diseases (those that are capable of spreading between non-human animals and humans) really excite me. You want to talk Lyme or avian flu? Better clear out the next few hours of your schedule. My other interests include hiking and traveling with my husband, birding, gardening, food, animal rescue and rehabilitation, and my pit bull mix, Isis.

I am a PhD candidate in ecology at the University of Rhode Island, where I work on communication theory-based tick-borne disease prevention programs, including conducting an evaluation of the first digital crowd-sourced tick surveillance program, TickSpotters. I work with the Center for Vector-borne Disease on a variety of public outreach projects, as as well assisting with field work.

I earned my masters at Montclair State University where I researched the role New Jersey birds (resident and migratory) play in the enzootic cycle of Lyme disease.

My interests include vector-borne/zoonotic disease ecology, science communication, and applying a One Health approach to mitigating disease transmission and outbreaks.