Neighbors Do Matter: Between-State Firearm Laws and State Firearm-Related Deaths in the U.S., 2000−2017

This is a timely project because of the newly reignited political debate about gun background checks. Since we will compile and use data that has already been collected by various agencies, we anticipate being able to complete the project and get the papers out within 6 months. This should help inform policy-makers. Also, as funding for gun violence prevention research becomes available again, the findings from this project will serve as ‘pilot studies’ that we can utilize to put together a large-scale project involving more complex data.

This research project will look at a state’s gun polices (comprehensive background checks, checks for purchases at gun shows, concealed carry laws, ‘stand your ground’ laws) and gun culture (percent of population who are licensed hunters, percent of gun-owning households) affect the outcomes listed below. In addition to a state's own polices and culture, the project will also look at whether the gun policies and gun culture of neighboring states affect the outcomes listed below.

We will examine the following outcomes: (1) Firearm deaths (homicide, suicide, accidental). For homicides we will also examine justifiable homicide (i.e. shooting a felon in self-defense), and homicides where the victim knew the perpetrator. (2) Crimes (burglary, robbery, assaults). This is to examine whether there is evidence that stringent gun laws may reduce the ability of citizens to self-defend themselves against criminals, and thereby increase crimes. (3) Gun access among youth. Specifically, whether youth report carrying a gun, including to school, and being threatened by other youth with guns on school property

The results will be published in quality, peer-reviewed journals. We will also make our gun-policy database available to other scientists who wish to do research in this area.

This project builds on the researcher's earlier work on gun background checks and firearm deaths. It examines a comprehensive set of outcomes that can tell us more about the effectiveness or lack thereof of state gun laws in making citizens safer. Very importantly, the project will examine the ‘spillover’ effects of the gun policies and culture of neighboring states. This will help us better understand whether a state acting in isolation can make its citizens safer, or whether there is a need for more comprehensive policies undertaken by groups of states, or the country as a whole before any meaningful change can occur.

Up until now this research has not been possible because of a funding freeze. In 1996, lobbying pressures led Congress to cut all CDC funding for research on guns, public health and safety (link). As a result, hundreds of public health scientists who require funding to support their research have not been able to work on this topic. While Obama has talked about restoring the funding, the sequestration poses a major constraint to such research funding.

We are turning to crowdfunding to continue this much-needed research on gun policies and gun violence.

We anticipate that the project will take about 6 months.

The funds will be used to pay two graduate students to collect, clean and compile the data, and to create a distance-weighted index of policies and gun culture in surrounding states.

Per my university’s requirements, I will also need to support my own salary for the time I spend on this project.

For any added costs (e.g. supplies, travel, consulting with other researchers), I will cover them from my own start-up research fund account.

Pre-Analysis Plan: We anticipate using multivariate regression analyses to test the relationship between gun policies and outcomes of interest. In all cases, the null hypothesis being tested is that the policies have no effects on the outcome in question. We will use established econometric techniques to account for the fact that states have different cultures, and so, for example, policies that work in Vermont may not work in the same way in Alabama. These will range from explicitly controlling for gun-culture by measuring current and historic gun-ownership, registered hunters, and political affiliations of state populations. We will also test other techniques (such as using 'fixed effects models') to ensure that our results are reliable, robust and can stand up to scrutiny!

The advantage of this project is that it will not require primary data collection. We will be gathering existing data from several different sources, primarily gathered by the CDC. The funds will be used to pay two graduate students (one doctoral student in public health, one law student) to collect, clean and compile the data, and, for each state, to create a distance-weighted index of policies and gun culture in surrounding states.

Each graduate student student will work 10 hrs per week, and be paid $16 per hour (participating in research projects is the primary source of financial support for our graduate students, so the wage helps them pay their tuition and support themselves).

Per my university’s requirements, I also need to support my own salary (including benefits like health insurance and retirement!) for the time I spend on this project. I plan to commit one full day a week (20% of my time) to this project for the next 6 months. I will use this time to conduct the empirical analyses, supervise the literature review, and prepare the manuscripts. We anticipate that the project will result in THREE publishable papers (gun policies and gun deaths, gun policies and other crime, gun policies and access to guns among teens).

I will also cover any added costs (supplies, travel, consulting with other researchers) from my own start-up research fund account. 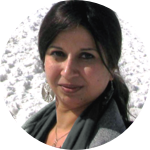 Dr. Sen's research primarily investigates how state policies and laws affect the health and safety of people. Gun policy is one area that particularly interests her. Dr. Sen’s name has been recommended by her associate dean for the Institute of Medicine’s committee on ‘CDC Gun Violence Prevention Research Agenda’. Dr. Sen is also going up for full professorship this year.

Dr. Sen's research primarily investigates how state policies and laws affect the health and safety of people. Gun policy is one area that particularly interests her. Dr. Sen’s name has been recommended by her associate dean for the Institute of Medicine’s committee on ‘CDC Gun Violence Prevention Research Agenda’. Dr. Sen is also going up for full professorship this year.

4 Lab Notes Posted
An update on our study: new variables for our model

'Will Only Show Correlation'???

My project was recently mentioned in the New York Times, Slate, and AL.com media.

I recently was lead author on two papers on how state policies on gun background checks affect firearm deaths. One was published in the peer-reviewed journal Preventive Medicine in Dec, 2012. ScienceDaily has covered this paper in an article here.

The other is coming out later this year in a book called ‘Assaults: Prevalence, Prevention & Psychological Implications’.

A: Great questions. One of our data sources is going to be FBI Uniform Crime Reports expanded data, where homicides are categorizies as 'justifiable' (a felon shot by a cop or private citizen in course of attempting a crime), so we will be able to look at whether gun policies affect ratio of 'justifiable' homicides to 'bad' homicides. The data is not perfect, since sometimes crime reports can have that field left blank, but its pretty good. Unfortunately there is no available national level data for non-fatal displays,but if one extends that logic -- such displays should prevent crimes like robbery/rape/assault. That is why tracing those is one of our main hypotheses. It is often argued that background checks etc will keep the guns out of hands of 'good people' while criminals will still have unlimited access. If that were the case, then one might expect these kinds of crimes to go up. And that is why we will test that too. Hope that helps. Thank you for your questions.