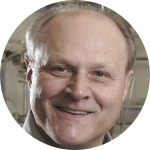 Michael Pirrung was trained as a synthetic organic chemist via academic studies at UT-Austin, UC-Berkeley, and Columbia University. His first faculty position was in the chemistry department at Stanford in the early 80s. In the late 1980s, he joined a working group of scientists forming a then-new company, Affymax. He established the chemistry program at Affymax, focusing on new methods of creating chemical diversity. His work there included the co-invention of microarrays, and he has been called “der Vater des DNA-Chips”. His Science paper on this work was recognized with the 1991 AAAS-Newcomb Cleveland Prize and, two decades later, is in the top 1% of most highly cited papers worldwide. The patent family based on his 1992 microarray patent US 5,143,854 was in the top ten most cited patent families during 1999-2004. This patent estate also led to his receiving the 1993 Intellectual Property Owners Distinguished Inventor Award, the 2004 Chemical Pioneer Award of the American Institute of Chemists, and the 2006 European Inventor of the Year (for small and medium-sized enterprises). He has been a visiting professor at UC-Berkeley, Baylor College of Medicine, Oxford, UC-San Diego, UC-Irvine and Caltech. He has held Hertz, Sloan, and Guggenheim fellowships and a NSF Presidential Young Investigator Award. In 1990, Pirrung joined Duke University, where he founded and directed the University Program in Biological Chemistry and Biotechnology for Business, an educational outreach program for non-scientists. In 2004 he joined the UC-Riverside Chemistry department as UC Presidential Chair and in 2012 was named Distinguished Professor. He was appointed a Professor of Pharmaceutical Sciences at UC-Irvine in 2014. His current research emphasizes organic synthesis and combinatorial chemistry. He has over 170 peer-reviewed publications and over 40 US and international patents, and has authored five books.

Synthesis of a Kidney Cancer Drug

You're a backer!
Draft

Can your mind make your body sick?

Synthesis of a Kidney Cancer Drug

Gun Policy, Gun Culture & Guns across the U.S.: What Makes Us Safer?

This work has finally made it into print!the paper

A quick update: in places like the NCI labs (where biological tests are being run), teams of scientists are working to carry out different parts of our experiment (including growing cancer cell ...

Thanksgiving greetings to all project supporters! We are certainly thankful for the contributions you made to getting our project to this point. We have entered the final testing phase for the drug...

As the saying goes, there is no such thing as bad publicity. In today's LA Times, there is an article on scientific crowdfunding that includes information about my experience with the project that,...

I just wanted all the supporters of our project to have a special Christmas holiday update on our progress. We sent our sample of TIR-199 off to the NCI in a cryogenic shipper to be certain it stay...

Well, we aren't flying a banner on an aircraft carrier, but we (well, Dr. Sudhakar Ambadi) did complete our TIR-199 synthesis last week (Happy Fourth of July!). As it turned out, the National Canc...

Hello, everyone - we are approaching the end of our adventure. If there were a 'Hail Mary' pass to throw to get our project across the goal line, I would throw one now. Microryza believes that just...

I am quite happy that our project has enjoyed a good deal of success on Microryza, especially your incredibly generous donations. I would appreciate if you could follow up by navigating to social ...