Most urban ecology research is from the temperate zones. As a Peruvian-American scientist, I'd like to know whether patterns of change in bird biodiversity (like biotic homogenization, the simplification of bird communities) seen in temperate cities are also present in tropical areas. This project, one of my dissertation chapters, will assess how bird communities in the Peruvian Amazon and in the Pacific Coastal Desert change along urban gradients.

Earth has been fundamentally changed by the rise of human civilization, and nature has to adapt to those changes. One of the most drastic changes is urbanization. I'm interested in how bird diversity changes due to urbanization because it allows us to imagine a world where cities are also part of nature, while understanding how our actions are already affecting species. Scientists in temperate zones are already asking those questions, finding that in many of these cities the species in a bird community are more similar between cities than they are to their surroundings. This could mean that cities always filter out the same types of species so that only species like the pigeons can survive. However, there is very little known about cities in the tropics, and patterns could be different.

This project is important from both a scientific and a conservation point of view. It is an opportunity to examine how human actions affect areas with higher regional biodiversity differently and understand how these characteristics can lead to higher or lower resilience against landscape change. From a conservation point of view, urban areas are both a risk and an opportunity: they can lower biodiversity but they also provide homes for most humans in the world. By understanding how and when biotic homogenization occurs, we can construct cities that are inclusive of most biodiversity, bringing nature to human populations traditionally disconnected from nature.

To see how bird communities change along urbanization gradients, a field assistant and I will sample one large city, one small city, and one natural area situated along a road in two different neotropical environments: Peruvian Amazon (Iquitos, Nauta, and National Reserve Allpahuayo Mishana) and the Pacific Coastal Desert (Lima, Huacho, and NR Lomas de Lachay). In each place, we will register every bird we see and hear. Back in the lab, I will analyze the data by looking at which birds are most common in which site, what the differences between the bird species combinations are, and whether these patterns can be linked to any particular land environment variable (such as percent green area). I will also compare this to remote sensing work using eBird, a citizen science platform.

Without the support of local field assistants, many ecological field projects would be vastly uninformed. I hope to hire one local field assistant in each environment (lowland Amazon rainforest and Pacific coastal desert) to accompany me in identifying bird species in each observation site ($20/day for 91 days). I will also be covering local transport, lodging when we leave the major cities (Iquitos and Lima), and food. I am an NSF Graduate Research Fellow, which gives me a stipend that will cover my own living expenses, and have applied for other funds to cover equipment, and international travel. However, many small research grants do not allow local hiring expenses to be included in the budget.

How to ensure cities becoming part of natural landscapes, while conserving and promoting associated biodiversity? This project is an important step towards understanding how neotropical urban areas are impacting the surrounding biodiversity and how best to deal with these impacts. I can think of no-one better than Natalia -knowing her for a long time already (I can only endorse her projects and achievements)- to tackle this issue and gather the information necessary to start answering how to make cities and biodiversity thrive together. 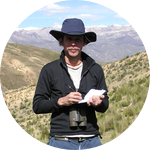 Armando Valdes-Velasquez
Associated Professor
Cayetano Heredia University, Lima, Peru
This is a great research project with important implications for urban conservation efforts. Not enough attention is paid to conservation in major Peruvian cities, so this research will bring visibility to emerging efforts there. Natalia has carefully thought through the research design and selected great sites. Looking forward to seeing the results. 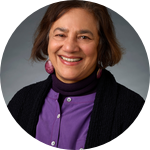 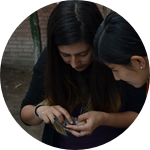 I am interested in the intersection of humans and nature, with a commitment to understanding how humans affect and are affected by the nature around them. Through this interest, I have been committed to conservation, ecology, and environmental education throughout my life: as a leader of the Bronx High School of Science League for Environmental and Animal Protection, as a researcher on Tree Swallows as an undergraduate at Cornell University, and as a program officer at the Wildlife Conservation Society's Amazon Program.

Today, my dissertation research at the University of Chicago focuses on how neotropical cities create new spaces for bird species to inhabit and new pressures for birds to adapt to. While living in Lima after college, two colleagues (Rocío Lopez de la Lama and Armando Valdés Velásquez) and I started a community blog called Limanatural, where local leaders can share their vision for a more nature-friendly Lima and engage in conversation with a wide audience.

Gifts of gratitude (will be shared with you based on level of donation):

$20 - $49 : One of the birds that I catch with mist-nets will receive not only an ID-number, but a name of your choosing!

$50 - $99: One of the birds that I catch with mist-nets will receive not only an ID-number, but a name of your choosing and a small life story in a form of a vignette based on three words of your choosing!