Depending on the media source one consumes, the interpretations of politically divisive events, like the 2014 Israel-Gaza Conflict, will be decidedly different. I'm interested specifically in how the events were interpreted by internet media in Israel/Palestine across the spectrum of political perspectives. After developing a greater understanding of how these media sources differ, I will be able to begin to explain why they diverge, and the significance of these divergences.

1) The frequency of certain events being mentioned in the media

2) For each event, looking at in what tone the event was discussed

The working media categories for this project will be:

Funding for in-person interviews will help better answer the question of whether the media in question represents its readership and conversely how the media can influence public opinion. For each category listed aside, there will be a set number of people (6-10) chosen that who together accurately represent the readership of the given source. For example, for category 5, 'Left-wing Israeli influential columnists', I will interview self-identifying left-wing Israelis who have all reported to regularly read at least half of the columnists chosen for the category. I will be rigorous in my pre-interview screening of participants to make sure every interviewee is truly indicative of the target population I'm looking for.

The primary goals for the research project include having a clearer understanding of the events that occurred during the 2014 Israel-Gaza conflict and how the events were interpreted differently depending on the political orientations of the media.

I plan to accomplish this through 65-100 interviews with consumers of all the different media categories in Palestine/Israel, as well as looking at the frequency of coverage of certain events and the sentiments when discussing these events in the online articles themselves.

When finished with the interviews and the quantitative research using the internet media articles, I plan to explore the reasons for the probable considerable differences across the media spectrum in a paper to accompany the results of the research.

This research project was initially made possible by the Jere Bruner Grant at Oberlin College. But after thoughtfully making my budget it was clear there would be a serious budget shortfall when factoring in all the costs of traveling to the region, traveling within the area to conduct all the interviews necessary, and paying for professional translation work.

When designing the research it was clear to me that participants needed to be able to answer in a language they're fully comfortable in. For most residents in Israel/Palestine, answering in English would deliver a meaningfully different result than if they could answer in their mother tongue. To preserve the integrity of the interviewees' answers, hiring professional translators to transcribe and translate the contents of the interview is essential.

This is a great, much needed study - we need to know more about the conflict and about how perspectives on it vary and are influenced by media sources. Looking forward to see your results! 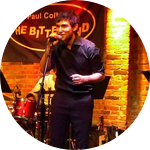 I spent a year working for the human rights organization The Israeli Committee Against House Demolitions (ICAHD) in West and East Jerusalem, as well as the West Bank. While working there I was a research assistant for Executive Director Jeff Halper. In addition, working as a tour guide for ICAHD enabled me to speak regularly with Israelis and Palestinians with wide-ranging political orientations (in Hebrew and English). I am familiar with the power dynamics in the region and have been through most major checkpoints between the West Bank and Israel and most border crossings between Jordan and Israel. I believe these experiences would serve to be instrumental in my ability to conduct the interviews necessary for the research as outlined above.

In the summer of 2013, I received a CIGSIE grant from Oberlin Conservatory to teach music to underprivileged Israelis and Palestinians in Yafo (Israel). I think this work with a diverse group of residents of Israel/Palestine from different ethnic and socioeconomic backgrounds, along with my experience as a tour guide in the region, will give me a great chance of success in conducting productive interviews for this research.

Outside of the politics world, I am a trumpet player studying jazz performance and composition at Oberlin Conservatory. I also enjoy playing squash, a sport I try to keep up casually during my studies. When I'm looking to relax I often find myself reading science fiction or cooking a meal with friends.

2 Lab Notes Posted
1st day update
Who is being interviewed and what will they be asked?