With an unusually shelled body, turtles are perhaps one of the most easily recognizable and enigmatic animals. Yet we know little about how the shell diversified during their rich 220-million year history. The shell-closing system of box turtles exemplifies the potential to undergo unprecedented evolutionary change. My project aims to, for the first time, employ 3D reconstruction techniques to visualise innovations that enable shell-closure - a key adaptation in turtle evolution.

Turtles come in freshwater, marine, and terrestrial flavors and are found in most oceans and continents of the world. This ecological diversification is reflected in the remarkable shell variation of species, suggesting that form and function of the turtle body plan has evolved in a unique manner. For instance, box turtles feature an extraordinary “drawbridge” shell-closing system with functional and anatomical components that are unusual among vertebrate animals. Thus, details on how it exactly functions remain elusive. Anatomists hypothesized that shell movement is enabled by an intricate shoulder blade articulation and contraction of powerful neck and shoulder muscles. Altogether, this pulley-and-lever mechanism enables the turtle to conceal all extremities during predator attacks.

Turtles are one of the most recognisable and enigmatic groups of animals. Although they are one of Earth's most successful reptiles since their appearance in the fossil record at least 210 million years ago, they are rapidly declining due to human activity. To inspire awareness, I strive to discover patterns and processes of turtle diversity. For example, research on box turtles may teach us that novel and highly complex forms do not necessarily limit the capacity for organisms to diversify. The shell-closing systems of box turtles is a prime example of this. Examining this functional innovation could reveal surprises on the processes that give rise to the skeletal system of vertebrate animals in general, while emphasising the urgent need to sustain turtle diversity for years to come.

Your contributions will enable me to test the hypothesis that skeletal and muscle adaptations in box turtles comprise a pulley-and-lever system enabling shell closure in a manner akin to a castle's drawbridge. This requires comparison of turtles with and without shell-closing systems. Thus, I plan to purchase eight turtles representing lineages with and without shell-closing systems (listed in budget below). My goal is to (for the first time) employ non-invasive state-of-the-art imaging techniques to visualise and compare neck and limb bone components inside the shell (see below). Based on 3D X-ray reconstructions, I will generate movies depicting shell closure biomechanics in box turtles. This requires travel to institutions in Germany. Your kind donations are needed to achieve this!

Requested funds for the listed budget items would be very helpful in completing key research objectives of project. For the project to succeed, I need to purchase, eight experimental animals, each representing a distinct evolutionary lineage. Turtles with shell-closing systems will be represented by species fromTerrapene, Sternotherus, and Pelusios. Turtles without, by: Emydura, Trachemys, Pelodiscus, Testudo, and Pelomedusa.

Secondly, I will need to travel to imaging facilities in Jena (Institut für Spezielle Zoologie und Evolutionsbiologie) and Berlin (Museum für Naturkunde in Germany) where I will collect and process most of the data (we are making cool animations!). Travel expenses are for air and ground transportation within Germany. At the moment, I do not have external funding to cover these expenses. To successfully complete our project, we must travel to use equipment only available in these institutions.

Antonio was a Ph.D. student in my lab at Iowa State University where he conducted groundbreaking, comprehensive research on a major evolutionary novelty---shell kinesis in turtles. He now turns his attention to testing the idea that this morphological innovation rests on the repeated origin of a lever-and-pulley system, using cutting-edge, non-invasive imaging techniques. Very exciting! 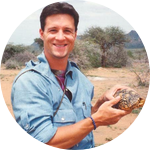 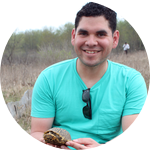 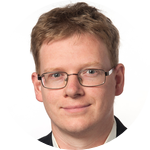 I am postdoctoral researcher at Lund University (Sweden) where I study various aspects of development and evolution in reptiles, particularly in lizards. As part of my PhD research at Iowa State University, I examined diversity in morphological development in turtles. These efforts have led to several key findings concerning the origins of morphological diversity in turtles, including developmental underpinnings of the highly derived box turtle body plan. I am currently planning additional work on turtle evolutionary developmental biology, as well as functional and evolutionary morphology with collaborators in Germany.

For on information on my research, see:

Since 2016. Curator of the Palaeontological Collection and Lecturer of Zoomorphology (Böhme-lab) in Tübingen / Germany

1 Lab Notes Posted
With and without shell-closing system

This is an example of 3D reconstructions we wish to generate with your help. The goal is to compare anatomical details but also to create animations that bring to life the biomechanics of turtles with and without shell-closing systems. This is the first attempt to make the comparison. 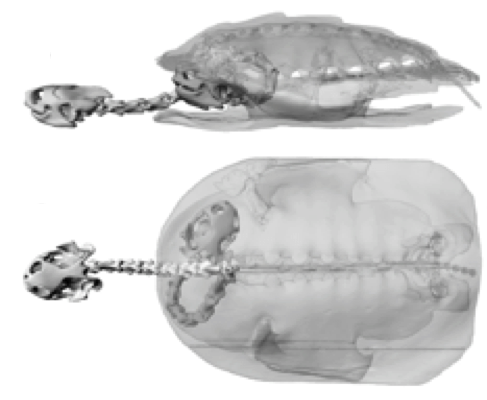