We derive the ages and other properties of stars by combining theoretical astrophysics, data from the best telescopes, Bayesian statistical analyses, and advanced computational techniques. We have developed an algorithm that allows us to combine the age information from multiple white dwarf stars to derive the age of our Galaxy. We request funds to support converting our algorithm to high-performance software code. From this we will both derive the age of the Galaxy as well as make our code publicly available for other research groups.

Age is one of the most fundamental of all properties,whether for a person, the Grand Canyon, the Earth, or the Universe. Without age, all other properties, such as mass or size or color, are without context. Age can also demand physical explanation. For example, by the late 1800's, physicists knew the Sun was at least 300 million years old. This already ruled out all then-known mechanisms for powering the Sun. We now know the age of the Sun precisely (4.567 billion years) as well as the age of the Universe (13.798 ± 0.037 billion years). Yet our knowledge of the age of the Galaxy is much less precise, with age estimates of 11.5 to 13.5 billion years. In order to understand how long it took our Galaxy to form and what the most important physics controlling that formation was, we need to precisely and accurately know the age of the Galaxy.

Our project will develop and demonstrate a new technique for deriving the age of the Galaxy. For our ultimate goal of an accurate and precise age of the Galaxy, two other developments are required. First, because the ages of white dwarfs are more fully revealed by their total luminosity than by their surface temperature, astronomers need accurate distances to thousands of these stars. This is currently happening with ESA's Gaia satellite and these data will be available to us in approximately two years. Second, the theory that governs the details of how white dwarfs cool as they age needs testing and refinement. Our technique, once demonstrated and then applied to the Gaia data, may discover inconsistencies in white dwarf models and will provide the best age for the Galaxy. It will also spur on new developments in white dwarf theory.

Our goal is to derive the most accurate and most precise age for our galaxy, the Milky Way. We do this by studying white dwarf stars in Galactic halo, which is the oldest component of the Galaxy. White dwarfs are particularly suitable for this study because their age is largely revealed by their surface temperature. We have already measured the surface temperature for a handful of halo white dwarfs and this study will derive their ages with the help of a new statistical technique that we have developed. Our novel technique allows us to pool data from multiple white dwarf stars to derive an age for the formation of the Galaxy and test the duration of that formation period.

Our software engineer, Elliot Robinson, trained within our research group as he earned his B.S. and M.S. in software engineering. We are fortunate to be able to hire him as a consultant to continue his involvement in our project both because of his technical expertise in software engineering and his extensive experience in Bayesian statistics and astrophysics. This combination of skills is rare. If Mr. Robinson were unavailable to us, we would have to hire another skilled software engineer for 5 times as many hours, and the statisticians and astronomers on our team would have to dedicate many hours to help the software engineer convert our mathematical algorithm into functioning code. In addition to being able to retain Mr. Robinson's consulting services, we will also use funding to finance conference travel to present our results. 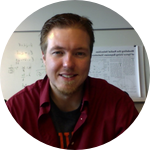 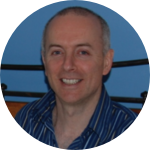 Aaron Webster is a USMC veteran of Iraq and Afghanistan now in his senior year at Embry Riddle Aeronautical University pursuing a double major in Space Physics and Computer Science.

Ted von Hippel received his bachelor's degree in physics from Dartmouth College and his M.S. and Ph.D. in astronomy from the University of Michigan. Subsequently Ted held postdoctoral appointments at Cambridge University and the University of Wisconsin, Madison, was a Staff Astronomer at Gemini Observatory, and a Research Scientist at the University of Texas at Austin. Ted is currently an Associate Professor at Embry-Riddle Aeronautical University. Ted has spent approximately one year of his life working at mountaintop observatories, including Kitt Peak and Mount Hopkins in Arizona, McDonald Observatory in Texas, Mauna Kea in Hawaii, Cerro Tololo in Chile, and Roque de los Muchachos in the Canary Islands. Ted's research specialties include the ages of stars and the properties of stellar populations.

Elliot Robinson has been dabbling in software since 1998 and has offered professional software consulting services as Argiope Technical Solutions since 2006. He received bachelor's and master's degrees in Software Engineering from Embry-Riddle Aeronautical University. Elliot provides services covering the entire software lifecycle with emphasis on modeling and statistical simulation, high-performance computing, and real-world applications of pure functional programming languages.

I've been dabbling in software since 1998 and have offered professional software consulting services as Argiope Technical Solutions since 2006. I received bachelor's and master's degrees in Software Engineering from Embry-Riddle Aeronautical University. Currently, I provide contracting services covering the entire software lifecycle with emphasis on modeling and statistical simulation, high-performance computing, and real-world applications of pure functional programming languages.

In my (not so copious) spare time, I contribute to open-source software, admire cows, modify '80s sports cars, machine metal, and experiment with alternative energy sources.

1. This is a short and informative video where you'll hear Dr. Walter Lewin, retired MIT physics professor and a personal favorite of mine, explain how white dwarf stars are formed.

2. Here is an interesting link that will show you a Hubble image of a distant galaxy's halo along with some interesting facts about how important they are to understand!

3. This animation will "shed some light" on the method used to study the halos of other galaxies!

Probing a Galactic Halo with the Hubble

4. Here is a Hubble Image of the Sombrero Galaxy. Notice that this galaxy illuminates a good portion of it's halo.

Also, additional funding after the goal is met will go towards conference travel and acquisition of time on Amazon's AWS EC2 computing engine.