The vampire bat, with its big eyes and razor sharp incisors, is one of neotropic’s most iconic animals. A protein from its saliva, Draculin, acts as an anticoagulant and may one day be used as treatment for blood clots that starve the brain of oxygen during a stroke. With a vampire genome, we are now in an excellent position to understand and separate fact and fantasy in the evolution of vampires by sequencing and analyzing vampire RNA during development.

I’ve studied mammalian development for the past seven years. When I began my doctoral work at Harvard University in 2012, I focused on Neotropical leaf-nosed bats, whose spectacular facial diversity evolved alongside specializations to diets that include insects, fruit, nectar, fish, meat, and even blood. There is no doubt these mammals are incredible and we know very little about how they evolved such a range of faces! We know how mammalian faces develop from comparative work on laboratory mouse strains, but we don’t know how nature has changed the developmental genetics across species.

The vampire bat has no other vertebrate equivalent. By characterizing gene expression across facial development, we can directly observe how one of the most fascinating and mysterious animals changes its face. This data will also be included in a larger dataset examining species-specific gene expression patterns in other Neotropical leaf-nosed bats, the most ecologically diverse group of mammals. By collecting and comparing transcriptomes from one anatomical region in different species across several equivalent time points, we can gain a deeper understanding of what constitutes a mammal face, and how changes in gene activity contribute to the evolution of vampires and other dietary specialists.

The funds will be used to enhance the PhD thesis project on facial development in Neotropical leaf-nosed bats. The vampire bat is one of the many spectacular species of bats that have specialized facial morphology. The goal will be to produce a high-quality reference transcriptome for the vampire face. A reference transcriptome is necessary to capture all the gene readouts during the formation of the specialized and novel facial structures only observed in this mammal: the leaf-nose, infrared receptors, the razor blade incisors.

This is a very feasible research project led by a very promising young scientist who already has a lot of experience capturing bats from the wild and research experience studying bat embryos at the morphological and molecular levels. Jasmin's proposed studies will help answer the question - how do you become a vampire?!

Richard Behringer
Professor
University of Texas
This is a great project on one of the most fascinating animal species. I am truly excited about the possibility and opportunity to learn more about the developmental genetic details and evolutionary history of the vampire bat. Jasmin is combining several powerful methods and she is well prepared to answer the scientific questions which she is asking. 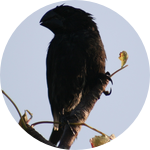 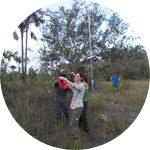 I am inspired by the legacy of Darwin and Wallace, who were the first to bring the theory of natural selection to bear on questions of morphological diversity, and I am convinced that modern scientists have many contributions yet to make. It is this inheritance of ideas, this cultural and intellectual continuum, that I find motivating. Central to this vision is the research program I develop during my graduate years.

I am an embryologist, morphologist, and evolutionary biologist. I specialize in mammals and I use modern molecular techniques to understand developmental and evolutionary processes. I focus on the craniofacial skeleton and I am particularly interested in the faces of extreme mammals-- bats!

As a second generation Mexican-American, I am thrilled to bring my interests in skeletons into a comprehensive research program focusing on a key icons in Mesoamerican culture and mythology (bats of course!).

Vampire with baby teeth
What is a vampire bat (Spanish)? 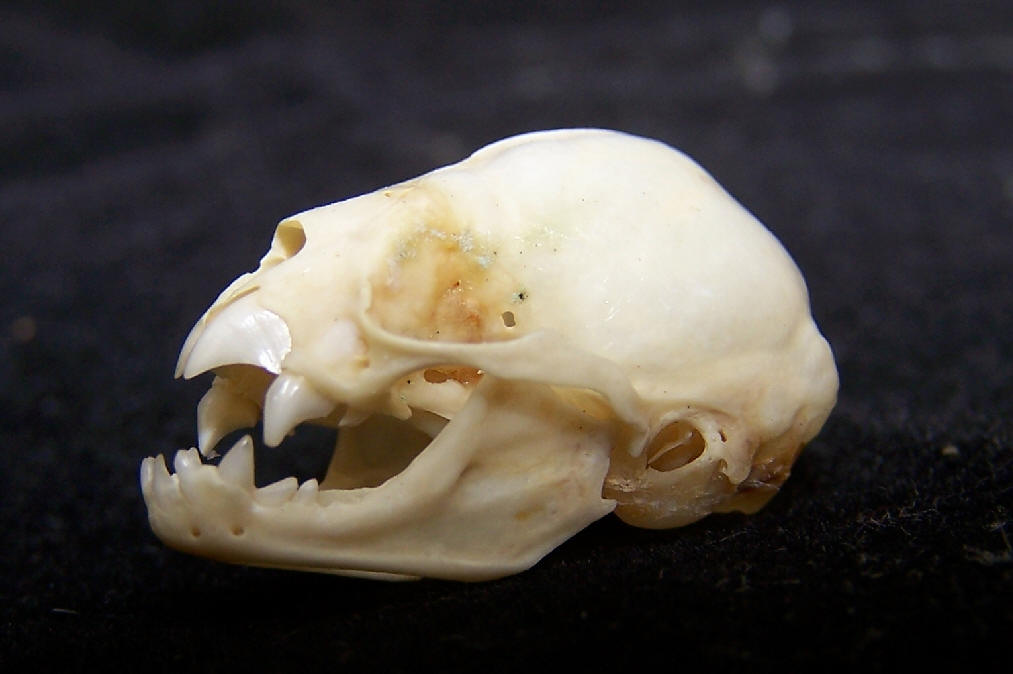 Actual vampire skull CT-scanned by me for 3D printing! 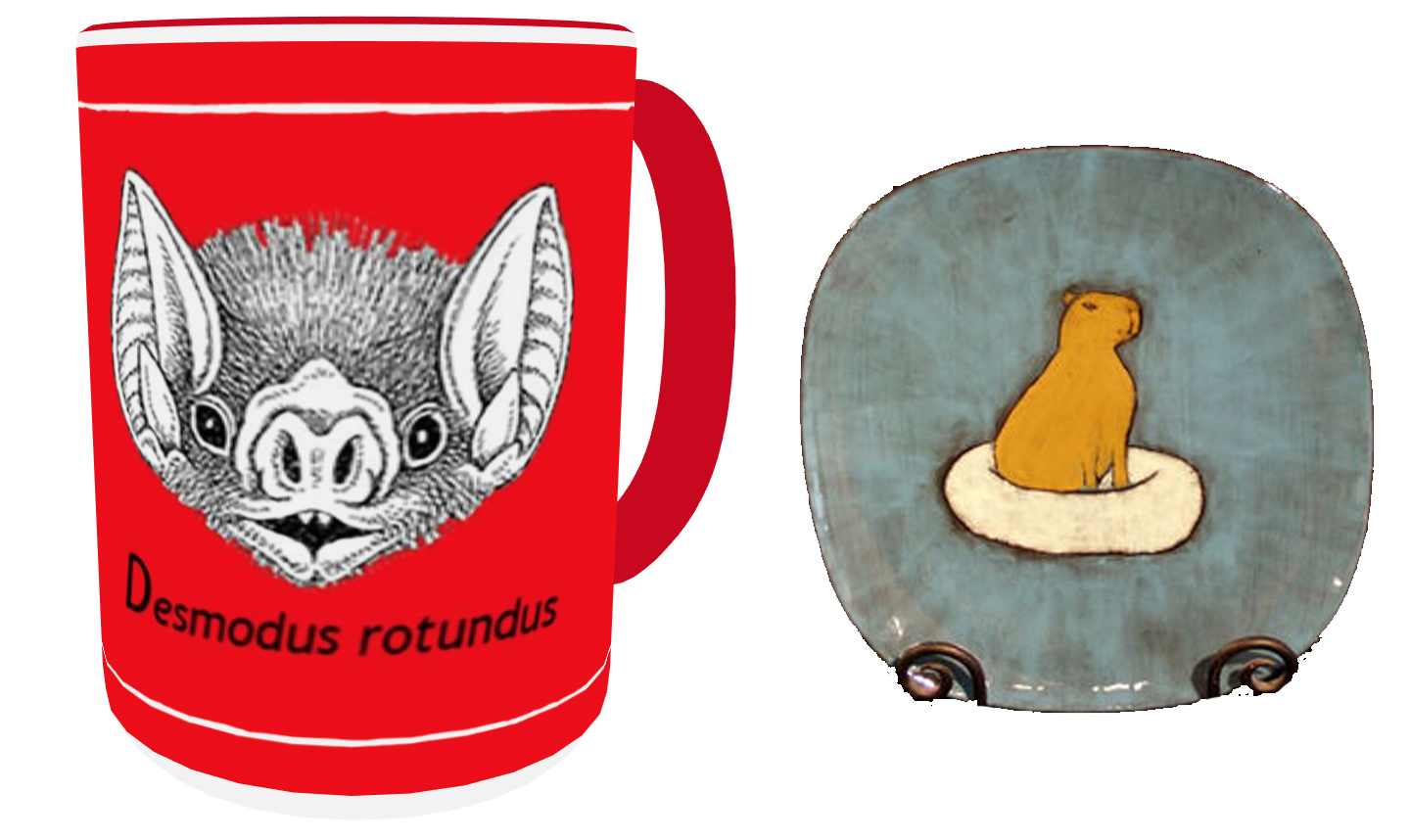 Example ceramic bat mug (15oz). Vampire bat will be hand drawn with pencil and colored with ceramic underglazed paint. The effect should look like a watercolor wash upon firing (right, from "Made by Me" at Harvard Square). 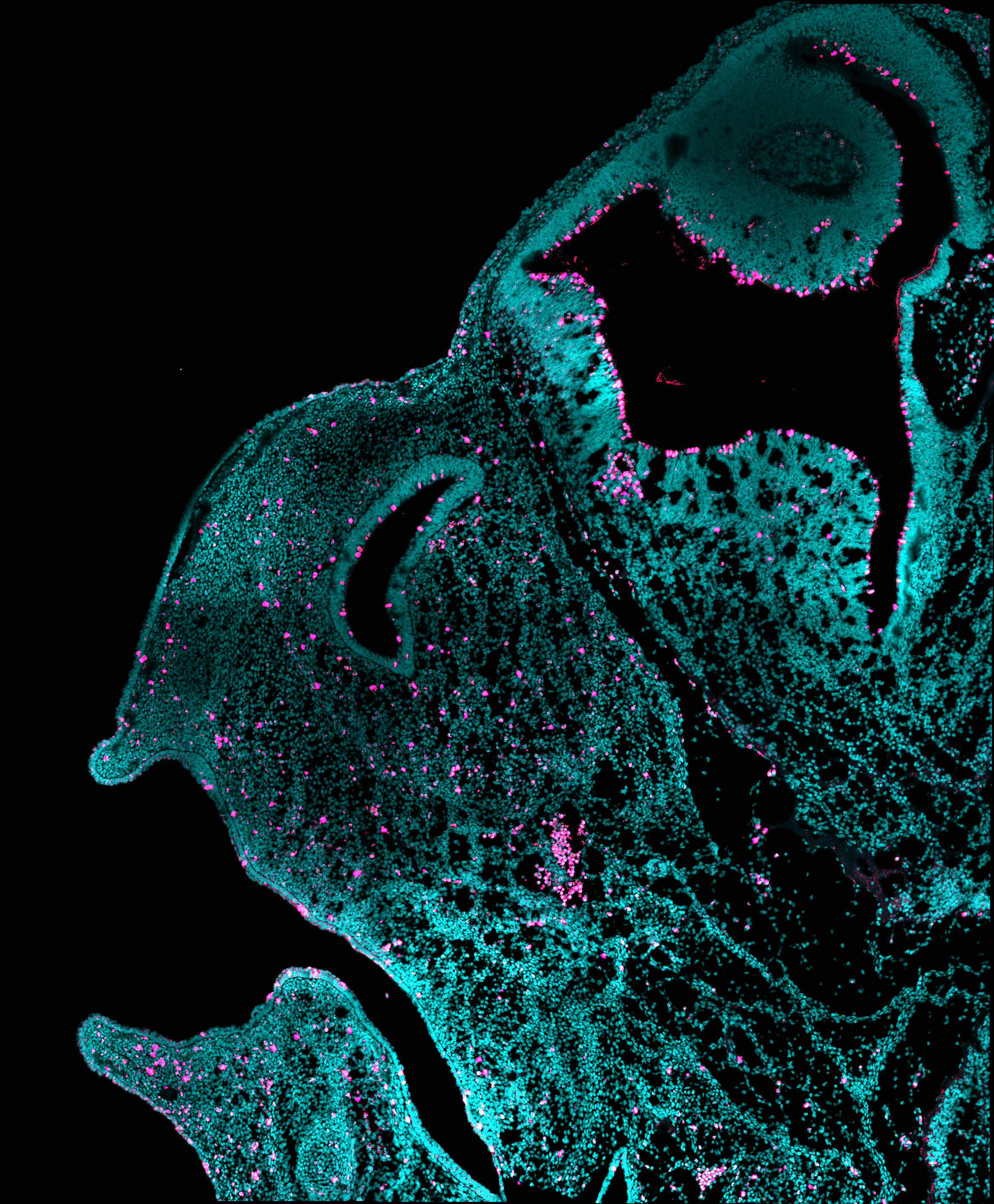 Immunoflourescence of bat embryo head showing proliferative cells (magenta) and nuclei(cyan). Specimen is oriented so face (snout and jaw) is to the left and brain is to the right. Imaged with confocal microscopy.