For commercial shellfish farmers and recreational hunters alike, marine biotoxins pose a significant threat to health and welfare. With this project, we aim to create an inexpensive and easy-to-use test kit for the detection of the small molecules auxin and theophylline using engineered yeast strains and DNA aptamers on a paper device. We hope that this project paves the way for a new class of biosensors capable of detecting a wide range of molecules, including the shellfish toxin okadaic acid.

Marine toxins are an increasing problem in Washington State waters. Produced in high concentrations by microorganisms during algae blooms, they are ingested by filter-feeding shellfish, causing illness and death in human consumers. Biotoxins are also difficult to detect; contrary to popular belief, algal blooms are not always the striking crimson of "red tides." Thus, blooms may not be discovered until after a poisoned shellfish is found.

The Washington State Department of Health and commercial shellfish farmers conduct periodic surveys of local beaches to catch contaminations early, but these methods are costly, time-consuming, and not always effective. This can especially pose a dilemma for individual shellfish hunters, who do not have the resources to screen their shellfish for toxins.

Our project aims to combine the emerging fields of synthetic biology and paper diagnostics to create an affordable, accessible, and accurate diagnostic test kit. While unable to use toxins directly at this early stage of the project, our "lab on a strip" will be a critical step forward in detection of small molecules and will later be applied to marine toxin detection. It will cut nearly 20 hours off the time needed to obtain results, allowing farmers to screen at a lower cost and empowering individual hunters to confirm the safety of their shellfish.

This is also the first project to attempt to grow yeast on a paper device, and if successful, could open the door to a wide range of similar biosensors. Such sensors would have applications in medicine, food, and the environment worldwide.

Our ultimate goal is to improve the safety of shellfish consumers worldwide. First, we a developed a paper microfluidic device that houses yeast, providing adequate nutrients for cell growth and freeze-dried for long-term storage. We then built a detection system for the plant hormone auxin in which yeast produce a color in response to an auxin input. In our second detection system, we used RNA aptamers to detect for theophylline, a small molecule that can be used to model common biotoxins.

After this, we aim to show that both detection pathways are viable on a paper-based platform and assemble working devices for detection of auxin and theophylline. Future work includes building a shellfish detection pathway for okadaic acid and submitting genetic parts to an open-source registry.

Since we are a student-led research team and do not receive direct funding from grants or our institution, we rely only on generous gifts from partners in the community. Our current supporters include Juno Therapeutics, Integrated DNA Technologies (IDT), and Geneious, as well as UW Computer Science, Biochemistry, and Bioengineering departments. We have also received funding from friends, family, and colleagues at the University of Washington.

Your contribution will help us continue our research and cover our costs for traveling to the September 2015 iGEM World Championship Jamboree in Boston. This is a unique and life-changing experience for our undergraduates, who will be able to meet other teams, learn about synthetic biology, and present on the world stage. We can't share our progress with at the conference without your help! 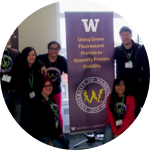 UW iGEM is a multidisciplinary group of students who run a synthetic biology laboratory and conduct independent research with the help of graduate students and acclaimed University of Washington professors. The UW iGEM Team gives potential scientists, physicians, and engineers a chance to apply their academic knowledge to solve real-life problems. Since 2007, our team has provided undergraduates with a unique and exciting opportunity to participate in cutting-edge research and take responsibility for their own engineering projects.

Through synthetic biology, we harness the power of living systems, modifying small organisms like yeast and bacteria to perform tasks that can improve nearly every area of life, including agriculture, medicine, and the environment.Every summer, our team works with UW synthetic biologists and members of the community to design and complete a novel research project.In the autumn, we present our findings at the iGEM World Championship Jamboree, an international competition held in Boston where student scientists can share their projects and experiences with one another.

Our team has a history of excellence, bringing home first place 2011, and earning a gold medal in 2014. Some of our previous projects include optimizing enzymes to ameliorate Celiac's Disease, creating bacteria that synthesize diesel, and building biological systems to kill anthrax. We are very excited to be developing a novel paper biosensor this year!