Mycoremediation is a method of bioremediation, in which fungi are introduced into an environment, in order to accelerate decomposition and improve the bioavailability of nutrients. Typically, species are selected based on targeted contaminants. A new approach to mycoremediation instead utilizes fungi that are already indigenous to the soil being remediated. This experiment seeks to prove / disprove whether the proliferation of native fungi can improve the fertility of soil.

Poor waste management protocols & exploitation of natural resources have subjected environments to devastating biodiversity-loss. Traditional bioremediation efforts are often impractical, ineffective, and very expensive. Fortunately, a recently-discovered method of mycoremediation may be a revolutionary approach to bioremediation. Traditionally, researchers introduce foreign fungi known to release enzymes that decompose the targeted contaminants. While likely effective, this approach potentiates the risk of introducing invasive species. However, the alternative approach to mycoremediation instead utilizes fungi that are indigenous to the soil. Therefore, minimizing potential consequences by simply proliferating native species.

The overall goal of this project is to determine if the proliferation of indigenous terrestrial fungi can decontaminate & improve the nutrient-composition of infertile soil. This research question can be answered through a simple procedure. First, initial samples are taken from an infertile plot of soil for heavy metals / nutrient composition testing. Then, indigenous fungi are isolated from the soil, and cultured over multiple months. The indigenous fungi are then reintroduced back into the soil in bulk amounts. Finally, after a few months of growth, the soil is resampled. The initial and final soil samples are compared, and conclusions are drawn from the data. The researcher hypothesizes that heavy metals will decrease in concentration and nutrient concentration will increase.

Michael Spooner is an excellent person to conduct this study. In addition to his formal education in Environmental Sciences, he is a self-taught mycologist, spending much of his free time studying, hiking, and learning. This is necessary field work to build on lab work that is showing potential for utilizing native fungi, which can be easily grown in abundance, to help remediate contaminated soil. Acquired funding and obtained initial soil data in Spring 2020. Experiment attempted in Summer 2020; but issues arose with storage and labelling of cultures. Experimented was revised September 5th; with updated methods. The experiment will restart September 9th 2022 by taking initial samples once again. Substrates will be colonized with native fungi and eventually reintroduced back into plot of soil. Finally, the soil will be resampled, and fertility data will be compared.

Inoculate Petri dishes with soil from plot of soil

Inoculate bulk substrates with grain and soil based substrates

Re-sample soil and submit to Cornell University for soil analyses 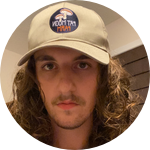 I’ve been passionate about the environment since a very young age. I eventually developed an ecological interest for fungi during my freshman year of undergrad. I quickly realized that mycology is one of the most understudied branches of science. I found this to be quite strange after discovering that fungi are absolutely essential to all living organisms. In order to focus on my mycological studies, I decided to finish school from home, and graduated from Southern New Hampshire University online. Today, I work as a horticulturist and mushroom farmer. I’m hoping to take my mycological pursuits to the next level with my experiments.

Mycoremediation could change the way our world assesses agricultural restoration; hazardous waste cleanup; forestry management; and many other environmental remediation efforts. The only reason we haven’t implemented this natural fungal technology is due to lack of funding for research efforts. The most renowned mycologists in the world agree that mycological research is extremely under-appreciated in the field of science. Therefore, I would love to take this opportunity to make scientific progress in the field of mycology.

Below is an example video of me making new fungal cultures in my homemade lab. It's simply a desk inside a plastic greenhouse, with a homemade laminar flow box. In my past experiments, I seem to have approximately 97-99% success rate in these conditions. This is where I'll be creating fungal cultures from the soil samples.