Blacktip sharks (Carcharhinus limbatus) aggregate by the thousands in the warm nearshore waters of Southeast Florida each winter. However, these massive aggregations are comprised exclusively of males. Where are the females? We will travel to their summertime mating/birthing areas to instrument females with acoustic transmitters to delineate their migratory route and identify critical habitat. Knowing the distribution of the entire population is essential for effective management.

Blacktip sharks exhibit a well-known, but poorly studied, seasonal migration along the US eastern seaboard. They migrate from summer mating/birthing grounds in the Carolinas down to Southeast Florida where they form massive aggregations in nearshore waters from January-April. Their migration closely correlates with water temperature and, as global water temperatures have increased, their northern range has expanded correspondingly. As a result, their migration is now up to 50% farther than it was historically. This imposes a significant energetic burden on the sharks and increases the travel duration.

Our work has revealed that the huge winter aggregations of blacktips in Southeast Florida are comprised entirely of males. Which raises the question, “Where are all the females?”

It is impossible to effectively manage a population if you don’t even know where half the population is for most of the year. Because we encounter only males in Southeast Florida, we lack data for the females. Blacktip sharks are harvested commercially and targeted recreationally, so, to provide effective management, it is vital to know their migratory route and where the entire population is distributed throughout the year.

As the northern limit of their migration expands due to global warming, the sharks will also establish new critical habitat which must be identified to provide appropriate conservation.

This project is significant because it will address a large data gap on the distribution of the female blacktip sharks.

This project will determine the migratory route of female blacktip sharks in the Western Atlantic. We will travel to known blacktip mating/birthing areas in South Carolina where we can be sure to encounter females. We will instrument 12 female sharks with 6 year acoustic transmitters. The instrumented sharks will be detected by an array of acoustic receivers distributed along the coast from Florida to Nova Scotia. Data from these receivers is shared freely among the researchers who are members of the collaborative networks. The movements of the female blacktips will be reconstructed from the receiver detections and their seasonal migratory pattern delineated over several years. From this we will be able to determine critical habitat used by these sharks throughout the entire year.

We are requesting funding for 12 long life (6 year) Vemco V16 acoustic transmitters and travel to South Carolina to deploy them. A small amount is also requested for fishing supplies. This project will be accomplished in cooperation with theSouth Carolina Department of Natural Resources. By working with SCDNR we will be able to use their vessel and staff, thus minimizing expenses and requiring only one person to travel.

We will travel to South Carolina in our lab truck which provides the most economical option to transport the fishing gear. Accommodation will be at an economy hotel for one week with per diem at the assigned state rate.

Upon arriving in South Carolina we will purchase bait and chum to catch the sharks.

I am happy to endorse Beth Bowers' project, the "Mystery of the Missing Females", which constitutes a portion of her dissertation project at Florida Atlantic University's Integrative Biology Program. This work would lend important insights into the management of the Blacktip Shark stock (a fishery of both important recreational and commercial value) in the southeastern United States. Given Beth's previous experience with acoustic telemetry and considerable exposure to elasmobranch research in the region, I have no doubt that she'll succeed. 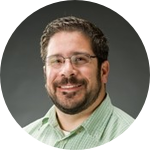 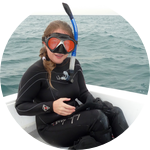 Beth Bowers is a PhD student in the Integrative Biology program at Florida Atlantic University. Her dissertation research focuses on the blacktip shark migration in the Western Atlantic. She has been studying the blacktip migration for the past two years and has successfully instrumented 51 male blacktip sharks with acoustic transmitters. She also maintains the local array of acoustic receivers and shares the data with members of the collaborative telemetry networks, FACT, ACT, and iTAG.

Beth is a member of three scientific societies; the American Elasmobranch Society, the American Society of Ichthyologists and Herpetologists, and the Marine Technology Society. She has given five oral presentations and presented one poster about the blacktip shark migration at various scientific conferences.

Beth has received various scholarships for her dissertation research, including from the Friends of Gumbo Limbo and the Palm Beach Fishing Club. Beth is President of the College of Science Graduate Student Association and is the Lab Supervisor of the FAU Elasmobranch Research Laboratory.

6 Lab Notes Posted
Why do you think males and females migrate separately?
How many indviduals are found in an aggregation?
Public Outreach