How did the construction of monastic buildings push monks to cooperate with people outside their cloister walls? The movement of materials and money for new chapter houses and churches required monks to interact with others in surprising ways. Monasteries not only dominated the landscape of medieval France, they were also influential social and political agents. Between ruins and archives, we can peek into the intrigue of monks building big.

The goal of this project is to pinpoint the site of a medieval monastery with sufficient architectural remains and surviving historical documentation in order to test the method of architectural energetics, a method through which construction labor is converted into energy (in terms of person-hours or person-days). Architectural energetics is a way of using surviving structure and archaeological remains to reconstruct the labor “cost” of a building.

Modeling the costs of constructing monastic buildings brings up a whole new set of questions not only about the masons and workers who labored to construct the buildings, but also the monks who used them. Where do the monks get the money to build? In the Middle Ages, what assets and materials could not simply be purchased? What kind of patronage relationships or institutional networks need to be in place to get those assets? Digging down through the past (archaeologically and through medieval archives) we can explore just how much monks were involved in the social and spatial organization of their surrounding landscape. Were they pushed around by royal patrons controlling the purse strings, or were the monks masterminding the local construction market from behind the scenes?

What were day-to-day operations like at the medieval building site? In what ways was the experience of working at a monastic site different than working at a cathedral site for masons or construction workers? Teaming the process of building an energetics model with documents that speak to the order and accounts of monastic life can tell us more about the unique interactions that occur between two groups that we usually think of as separate. At the same time, the model can speak to the depth or scale of the relationships between the monastery and builders, or the monastery and patrons. An interdisciplinary approach that considers each site's unique history alongside the energetics model will reveal new aspects of the social and economic standing of the monastery in the Middle Ages and uncover an interconnected network of relationships borne out of the necessities of building monastic complexes.

Powerful monastic orders, like the Cluniacs, Cistercians, and Augustinians, were embroiled in nearly every facet of medieval life. As leaders and institutions, they held an immense amount of social, political, and economic capital, which they frequently put to use. The most universal way that they leveraged their capital was to add new buildings to their monastic complexes. Depending on the number and resources of their inhabitants, monasteries could have dozens of buildings inside the cloister walls: from churches, chapter rooms, and scriptoriums to dormitories, refectories, and lavatories- some even had hotels and hospitals. With all these structures, the monastery was undoubtedly a site of constant renovation and construction. Existing research has looked at the political dealings of monks with secular nobility and the princes of the church, but there are few who approach the role of monastic networks in the lives of ordinary non-elites directly through architectural remains.

Introducing architectural energetics as part of the integrated approach to monastic sites has the potential to create a more thorough and balanced picture of medieval history. When we look at how these disparate groups –monks, wealthy patrons, and laborers– come together in the completion of a single construction project, it gives us new insight on the nature of their relationships within the larger context of medieval society. Since construction is a long, expensive process that brings outsiders inside the walls (and the business) of the monastery, it invites moments of social and political leveraging, which can then be reconstructed using the proposed integrated architectural-archaeological-historical approach. Although energetics has been applied to reconstructing the costs of ancient structures, the value of the model has been overlooked for medieval buildings. As a constantly-changing architectural unit with many components, monasteries offer a unique site to test and modify the energetics method. The use of architectural energetics, which builds materials and rates of work into a model to calculate the labor cost of a structure, provides another way of quantifying the human and material costs of a project (especially if documentary evidence of those costs is incomplete or does not survive at all). By converting materials (such as lumber and limestone) and behaviors (such as quarrying or carving stone) into units of labor energy, different assets necessary for construction (like the skilled work of master masons or the massive lumber and stone requirements) can be compared across types and may even provide a more functional model for the use of energetics at medieval sites in the future.

For this project, the primary goal is to pinpoint the most appropriate site for future analysis and excavation. I am currently in the process of conducting preliminary historical and archival research in order to identify 3-4 potential monastic sites that can be used to test the method of architectural energetics for the Middle Ages. In early June, I will be traveling to France. There, I will visit and study in person the shortlisted sites to evaluate their potential for further in-depth archaeological and historical investigation.

The second goal for this project is to create lines of communication with the public and to reach out with my data about medieval monastic construction. Can’t come with me to France? I aim to make you part of my exploration and excavation team through real-time online updates. I will keep you up-to-date with new information as it comes to light in the archives and in the field using dedicated Facebook page, Tumblr, and Twitter accounts. You should feel free to share and participate: I am excited to work through thoughts and concepts with you. The best part about this project is that you will be able to impact the research as it is happening. I am committed to providing current, open-access research on my project, and to bringing medieval monasteries straight to your living room or lab, computer or tablet. Information of the Middle Ages can be hard to come by, so I want to create the best possible environment for the free exchange of information and ideas about my project. Impress your friends with facts about medieval construction. Live vicariously through photo updates from the wilds of the rural French countryside.

The budget shown here for this project represents the most essential costs. The largest costs of this project are associated with traveling to France and traveling between sites. The budgeted transportation costs include train fares, as well as car rental and fuel. A week's room and board will allow me to explore 3-4 potential research sites and to do preliminary archaeological field survey for my dissertation. These site visits are invaluable because they allow me to see the reality of the geographic situation and to deal with unanticipated issues on the ground: something that is impossible from across the Atlantic Ocean. I am also seeking competitive external grants to cover additional costs and other aspects of the project. 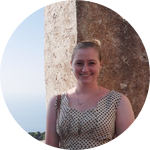 Alexis Jackson is a graduate student at Brown University in the History of Art and Architecture department. She studies the architecture and archaeology of medieval monasteries. She received her B.A. with honors from the University of Pennsylvania in 2012, where she studied European History, Art History, and Classical Studies. In 2011, she participated in the Saronic Harbors Archaeological Research Project, which inspired her interest in landscape archaeology. In 2013, she excavated with the University of L’Aquila at the site of Amiternum, in the Abruzzo region of Italy. Alexis’ research interests include the study of how hospitals and monastic outbuildings relate to the greater (physical and social) monastic landscape in the Middle Ages. As an S4 Fellow with Spatial Structures in the Social Sciences at Brown, she is also interested in employing GIS applications for mapping social networks that include people, places, buildings, and objects as active participants.

I am a graduate student in the History of Art and Architecture Department at Brown University, studying the archaeology of medieval monasteries.