Leatherback sea turtles (Dermochelys coriacea) are the largest species of sea turtle, often reaching over 900 kg. The goal of our study, conducted along the beaches of southern Florida is to understand the size of the leatherback population, individual size, migratory patterns, family lineages, and other important aspects of leatherback biology. Studies like ours are critical to help protect this endangered species from the threat of extinction.

Each night from mid March until June, our team patrols the beaches in southern Florida. When the team encounters a nesting leatherback turtle, we tag and measure her and document any physical damage or wounds from nets, boats, fisheries interactions and the occasional shark. We can also use tracking studies and genetic analysis to answer more detailed questions. By uniquely identifying each individual, we can begin to unravel some of the mysteries of this important nesting population.

We are expecting a very busy leatherback nesting season in 2014. In recent years there has been a steady increase in the number of turtles nesting on Florida's beaches. It is our goal to receive funding and complete a successful season.

The first step toward protecting an endangered species is to understand it, the threats it faces, and the resources it needs to survive. While populations of leatherback turtles in the Atlantic seem to be growing, the Pacific populations have declined by more than 90% in the last two decades. It is crucial to understand these turtles to stop this rapid loss.

Our research team collaborates with scientists from institutions such as the National Marine Fisheries Service, Florida Fish and Wildlife Conservation Commission, WIDECAST, the Canadian Sea Turtle Network, and many Universities. Collaborations and partnerships like these are key to truly understanding the global population of leatherback turtles.

The proposed survey area covers approximately 30% of the major nesting habitat in Florida. Funding for ATVs is critical. The survey area has the potential to get as many as 10-15 leatherbacks a night. The ability to move about the beach quickly and quietly is essential.

Our goal is to be able to understand what has caused the rapid increase in this nesting population while leatherback numbers in the Pacific Ocean continue to decline dramatically. We need to act now to prevent the complete collapse of this population. Contrary to Pacific trends, the number of leatherbacks nesting in the Atlantic seems to be increasing. If we can understand the reasons behind this increase, we can apply these lessons to the quickly disappearing Pacific population.

We are seeking funding to purchase an All Terrain Vehicle (ATV) and fuel for the 2014 season. ATVs allow us to survey miles of heavily nested beach. They are the most heavily utilized piece of equipment that we have. In addition to nesting leatherbacks, the beaches of South Florida can hose as many as 200 loggerhead and green turtle nests in a single night!

We are using this website to fund a small portion of our overall budget. Our project also requires a smaller ATV, fuel, PIT tags, and a scale and tripod for weighing our turtles.

We are so overwhelmed with the support that we've received from the experiment community. We have added a stretch goal to our project. With your help, we hope to fund our fuel for the rest of the season. As we drive the beaches each night on two ATVs, it consumes a great deal of fuel. Please help us reach our goal of funding all fuel for the 2014 research season!

Wow! We reached our first stretch goal with help from all of you! You're incredible! We've added a second stretch goal so we can purchase a scale to weigh these massive turtles. This is one of the first steps in understanding the health of the population and what changes occur as turtles go through the nesting season. Weighing turtles that can reach 2,000 pounds is no easy task! 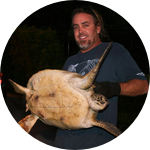 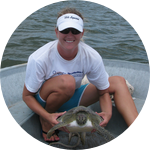 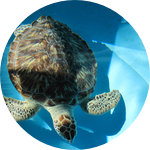 Chris Johnson has been studying sea turtles for the past 22 years and has spent many sleepless nights in his own personal Jeep exploring South Florida's beaches in search of leatherback sea turtles.

Sandy Fournies began her career with sea turtles in 2002 in sea turtle rehabilitation. Her most recent project was designing and publishing a marine turtle veterinary medicine website in collaboration with the Wider Caribbean Sea Turtle Network (WIDECAST) - seaturtleguardian.org.

Chris has been conducting sea turtle research along some of the most heavily nested beaches in Florida USA since 1993.

I have been working in the sea turtle research field since 2002. My interests lie in population biology, nesting behavior, anthropogenic sources of population decline, movement and tracking, auditory abilities and acoustic monitoring. I have been passionate about leatherback conservation and research since my first experience as an intern in Juno Beach, FL.

Leatherback sea turtles nest as many as eight times in a single season, returning approximately every ten days. They typically nest every 2-3 years.