Managers have identified two species of hemiparasites for addition to sites dominated by aggressive plant species, such as tall goldenrod (Solidago canadensis) or big bluestem (Andropogon gerardii). Both are perennial root hemiparasites native to tallgrass prairies. We have extensive experience with the more common species, Pedicularis canadensis (lousewort) but have also conducted vegetation surveys on sites with Comandra umbellata (bastard toadflax).  For populations of these root hemiparasites, we will: (1) conduct vegetation surveys to identify and to estimate abundances of each species (hemiparasitic, native, and exotic) in up to 50 randomly selected plots; (2) determine species richness of native and of exotic species; (3) sample soil from each plot for analysis of nutrient content, and (4) determine light levels at ground level. 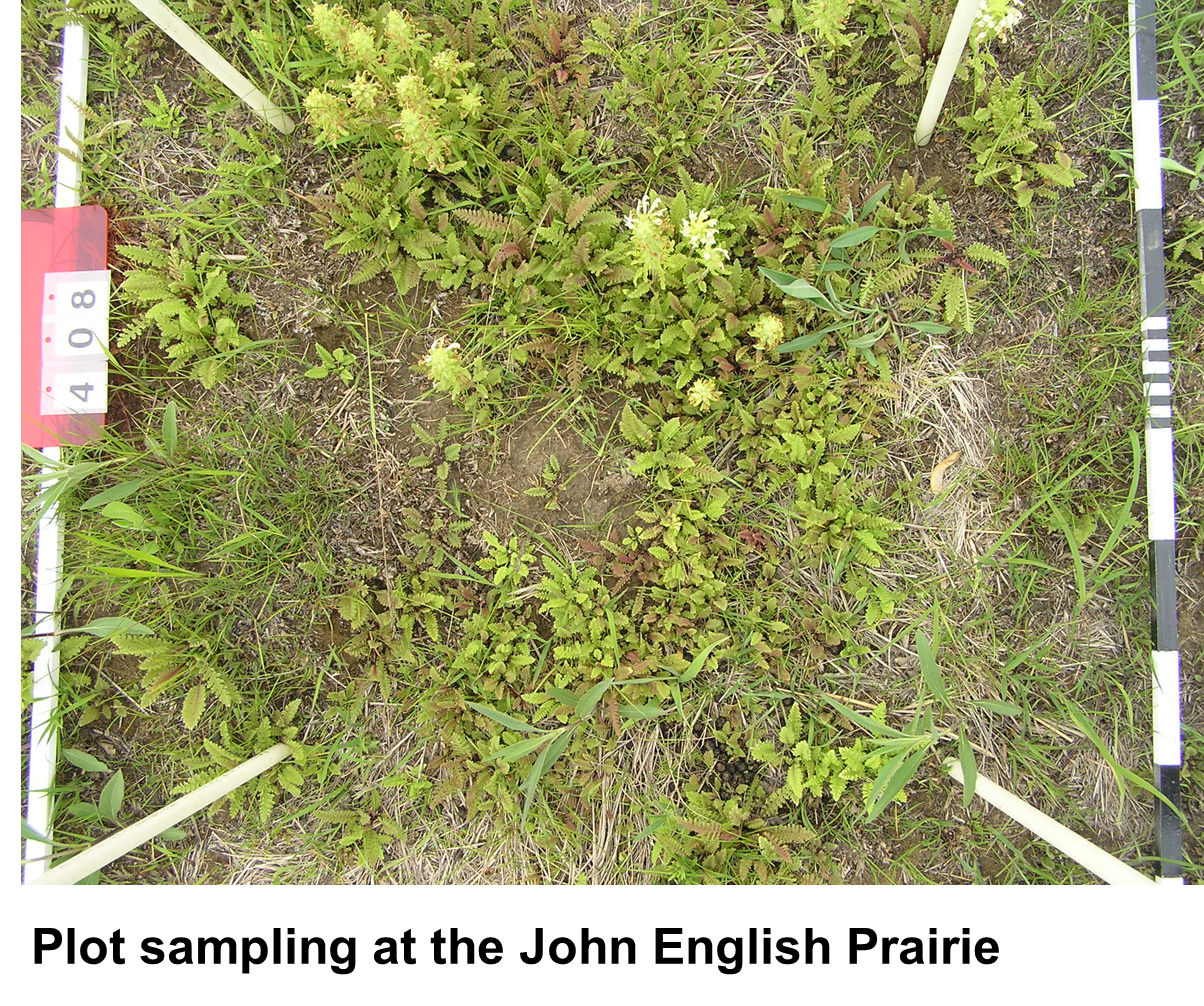 Surveys will be conducted in June when early-flowering species are still evident. We aim to survey four sites that vary in soil nutrient quality, age, and size to broaden our data base, which includes two restored/recreated prairies, an old field, and a prairie remnant. We will use structural equation modeling to test hypotheses for the role of hemiparasites in prairie ecosystems and will share our data and results with the managers of the sites we survey.

Our field methods are fairly standard. To gather the most complete data, clear days for measuring light levels are needed, and recent rain to soften the ground for soil sampling is desirable.  Consequently, final timing of the field sampling will depend on weather conditions.

We have used structural equation modeling to assess direct and indirect effects that occur among members of this plant community, how they are affected by fertilization, and how they are affected by soil nutrients and soil mico-organism communities.  These structural equation models have revealed that the hemiparasite P. canadensis plays a central role in the community, directly and indirectly affecting abundances of dominant grass species and forbs, but having limited impact on legumes such as the invasive species Lespedeza cuneata.  These indirect effects occur via density-mediated effects on plant-plant interactions, and by modification of soil nutrient levels under the hemiparasite.

One challenge for our analyses is that our sample sizes to this point are too small to yield accurate estimates of reciprocal effects (e.g., between the hemiparasite P. canadensis and one of its major hosts, Schizachyrium scoparium (little Bluestem).  Such reciprocal effects on abundances of host and parasite are expected based on the biology of their interaction; hence we believe they are important.  Greater sample size is likely to enable us to estimate with some accuracy those reciprocal effects.