My research team and I will evaluate a new type of fishing gear that is designed to help reduce the unintended capture of sharks during commercial and recreational fishing. This unintended capture is called "bycatch". With millions of sharks dying each year due to the stress of capture, bycatch has contributed to the world-wide decline in shark populations. The new gear is designed to break away when a shark takes the the bait but retain target species such as tuna and swordfish

The World Wildlife Fund estimates that millions of sharks die each year due to unintended capture during fishing (see www.worldwildlife.org). While the survival of these sharks is likely very high after capture during sport-fishing, shark survival after commercial capture is very low. In some cases, the post-capture survival is only a few percent. This low survival, combined with other factors, has resulted in shark populations declining world-wide. A world without sharks would be a far less interesting place and would lead to deleterious ecological changes that are difficult to predict. For example, one study found that shark declines have resulted in a situation referred to as a "trophic cascade", that began with declining shark numbers and resulted in a collapse in the scallop fishery.

The successful development of the fishing gear described herein will return many millions of sharks to the oceans unharmed and will help reverse the world-wide downward trend in shark populations. The new fishing gear has loops of line that break when the shark takes the baited hook. The blade-like teeth of the shark readily cut through the line whereas target species (tuna and swordfish) have very small teeth that are not designed for cutting. When the loops break, the shark is released and swims away. Preliminary testing of this new gear has been very promising with many sharks captured on control lines (no loops) and no sharks taken on the experimental lines (affectionately referred to as the "loopy leader").

The goal of the project is to develop and successfully test the new gear. Although some preliminary tests have been conducted, additional research is needed for final development. The manner in which the tests are conducted are very work intensive requiring long hours on-board a research vessel. Baited hooks, half with the experimental hooks and half without are set and the numbers of sharks captured on each are recorded. Please note that the lines are set for very short periods of time and any animals captured are immediately released. The study areas where we conduct tests include Gulf of Mexico waters offshore of Florida, Alabama and Mississippi.

Funds will be used to address a number of issues that are critical for the success of this project. We particularly need funds for boat upgrades. For example, we are without a working chart-plotter (the device that allows us to determine our location) and funds will be used for that purpose. Additionally, our boat trailer requires maintenance. Any additional funds raised will be used for travel and construction of the new gear.

The entangling leader idea proposed by Dr. Glenn Parsons could be the most effective weapon in the conservation biologists' arsenal for reversing the decline in shark numbers. I have watched this project from its inception and I can tell you that the most exciting aspect of the work is that early results seem very positive (like, this is really going to work!), but many trials will be needed before the concept will be ready to present to the commercial fisheries community. 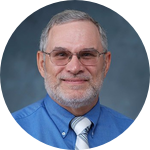 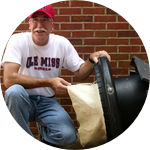 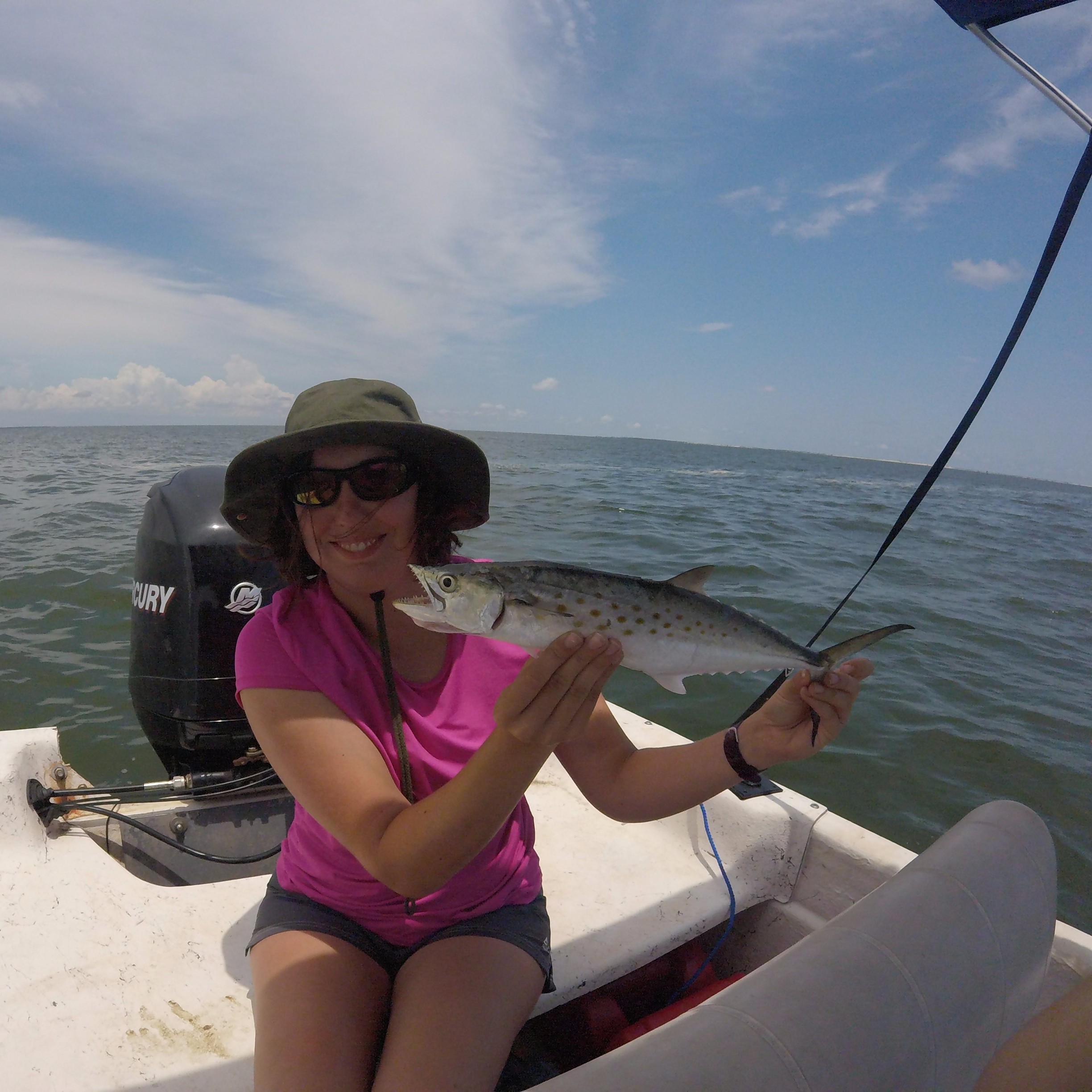 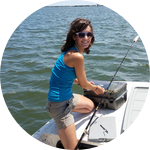 The University of Mississippi
View Profile

Dr. Glenn Parsons has researched shark biology for over 40 years and has focused his research efforts on the vexing problem of fisheries bycatch. He holds a PhD from the School of Marine Science at the University of South Florida and has been a recipient of many awards for his research. He was recently recognized for his bycatch reduction research by the World Wildlife Fund. He is is a Professor of Biology at The University of Mississippi and CFO of Parsons Consulting, a small company dedicated to solving fisheries and ecological problems.

Ehlana Stell is a graduate student working on her masters degree under Dr. Glenn Parsons. Her Bachelors of Science in Biology was obtained at the University of Mississippi where she first started working with the issue of shark bycatch and has worked with sharks and other fishes for conservation efforts over the last 3 years.

Lauren Fuller is a graduate student at the University of Mississippi in the lab of Dr. Glenn Parsons. Her Bachelors of Science degree in Organismal Biology was obtained from the University of Arkansas at Monticello. For three years, she has conducted research to aid in the conservation of sharks, specifically dealing with shark bycatch and the stress response of sharks after capture. 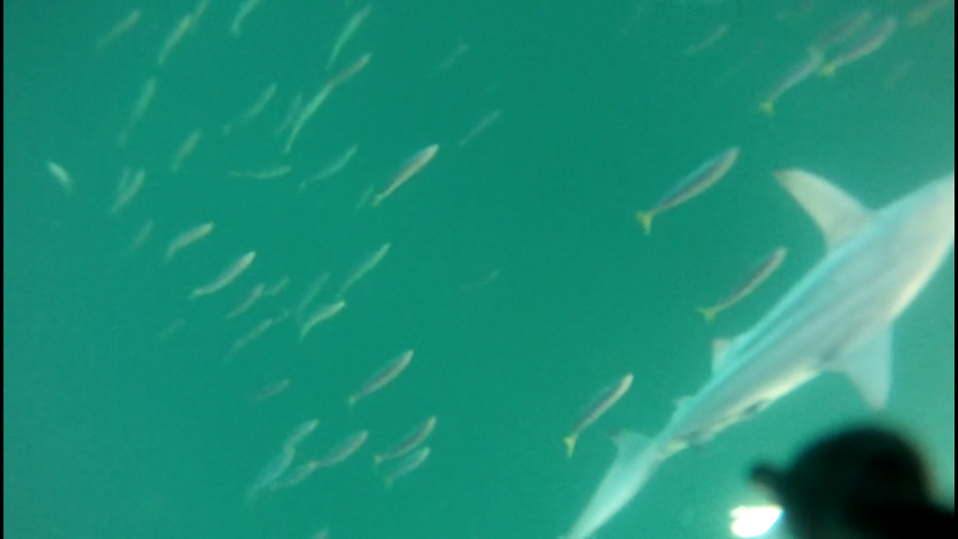 The picture above shows a blacktip shark approaching the bait on our leader camera. This shark eventually took the bait but was not captured. The school of fish are scad or cigar minnows. Each time we observed these fish, we knew a shark was about to appear on the camera. It appears that the scad were following the shark (rather than vice-versus).

We have already completed preliminary testing of this new gear and we found that it does perform as described. Using video attached to baited leaders, we videotaped the behavior of sharks as they approached and then took the new leaders. We likewise found that sharks break the line in much higher percentages than do fishes that do not have sharp, cutting teeth. We are also investigating the use of different leader materials, i.e. ultra-high molecular weight polyethylene (UHMWP) as a substitute for typical monofilament. UHMWP breaks much more readily than does monofilament and simply switching to this leader material could likewise provide opportunity for sharks to escape. 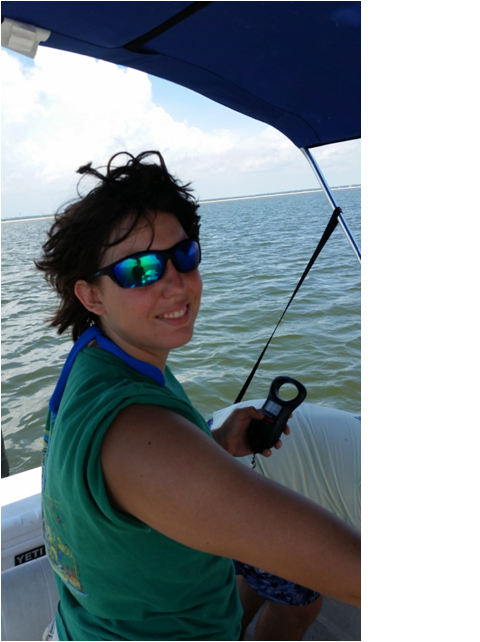 Ehlana Stell taking data on board the research vessel. 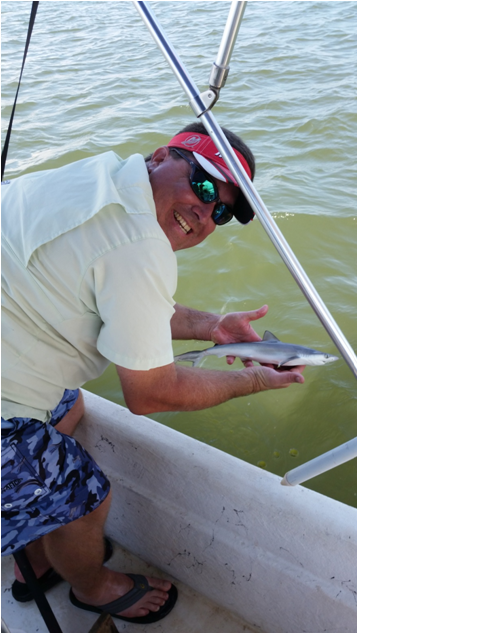 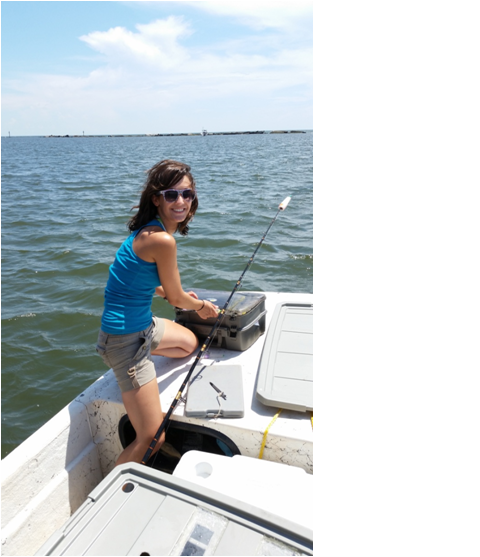 Lauren Fuller sampling off the coast of Horn Island. 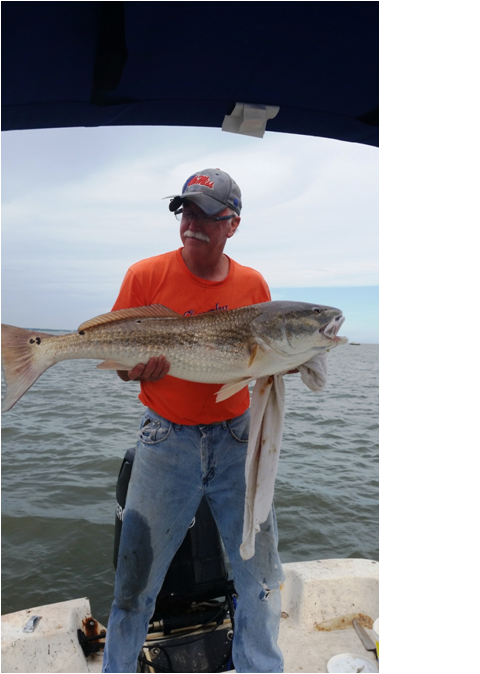 Above: Dr. Parsons displaying a redfish captured on an entangling leader.

Below: Immediately after the bull shark bit Dr. Parsons on the leg. That makes shark bite number 4 for the team leader. 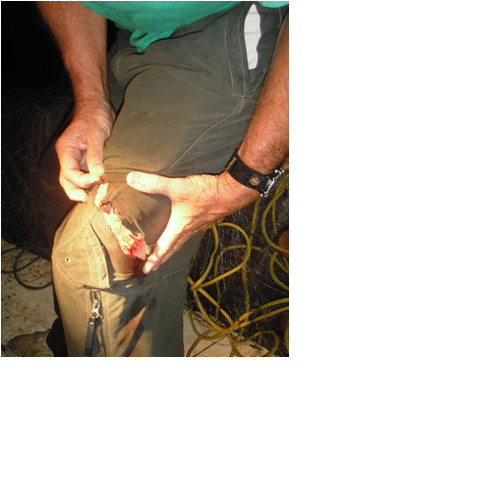 For more information on the work being conducted on bycatch by Dr. Parsons and his talented research team, please visit www.bycatch.net

The white shark cover image was made available by Elias Levy. 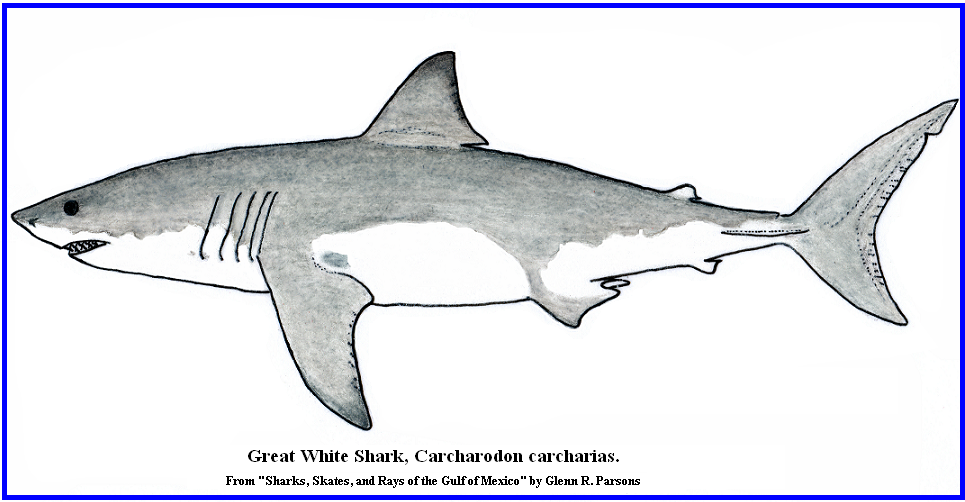