The introduction of non-native goats to an important Chilean seabird island may impact the breeding of a threatened seabird species unique to Chile, DeFilippi’s Petrel. By using automated cameras, we will compare the colony attendance and reproductive success of the two largest breeding colonies for DeFilippi's Petrel and assess goat impacts on breeding. Results will be used to inform future conservation actions.

Seabirds, including the group known as gadfly petrels, are one of the most threatened groups of birds globally (Croxall et al. 2012). Despite this worrying conservation status, many species of gadfly petrel, including DeFilippi's Petrel, remain poorly studied and lack current population assessments. Although DeFilippi's Petrel is globally listed as Vulnerable (BirdLife International 2016), little is known about the ecology of this Chilean endemic species. This lack of information makes meaningful conservation planning difficult. The proposed research will use automated cameras to improve our understanding of breeding success at the two most significant colonies and potential impacts of non-native goats at the largest colony, information critical for conservation planning.

DeFilippi’s Petrel is recognized as a globally vulnerable species but remains virtually unstudied. Such species can easily fall between the cracks and be lost before we even notice. With nearly 30% of all species globally threatened, improved conservation planning is essential for the world’s seabirds. However, conservation plans are only effective insofar as they are informed by quality scientific data. This project will contribute unique comparative data for DeFilippi’s Petrel on colony attendance patterns, provisioning rates and reproductive success from the two largest breeding populations. In addition, the potential impact of non-native goats will be assessed for the first time. This information will have a major role in the conservation planning process for the species.

The funds will be used to purchase automated trail cameras and pay for transportation to deploy and retrieve the cameras. Cameras will be deployed in the two largest breeding colonies, Santa Clara Island (goat-free) in the Juan Fernández Islands and San Ambrosio Island (goats) in the Desventuradas, during the 2016 breeding season. We will install cameras so that multiple nests will be monitored within the field of view simultaneously. Cameras will operate continuously for a period of at least two months. With this photographic documentation, we will conduct a comparative analysis of DeFilippi’s Petrel colony attendance patterns, provisioning rates and breeding success and evaluate goat impacts. We will use these findings to help establish conservation actions for the species.

This project is part of a larger long-term program focused on assessing the conservation status of, and developing a conservation plan for, the species. We have funding to support basic monitoring of the breeding season, but more detailed studies of the breeding biology of the species are not possible due to the remoteness and difficulty of access of nesting colonies. Automated trail cameras will allow us to collect otherwise unobtainable fine-scale information on colony attendance patterns, provisioning rates and reproductive success at the two largest breeding colonies. The rechargeable batteries and battery charger will be used for the trail cameras. We need to hire local fishermen to transport us to breeding colonies for camera deployment and retrieval. Results will allow us to compare breeding parameters between the colonies and assess the degree to which non-native goats may be impacting breeding on San Ambrosio Island, a potential threat that has not been evaluated.

I am thrilled to endorse this compelling project because it uses a novel approach to address the conservation of an endemic threatened species in a location of great biodiversity value. Moreover, Dr. Peter Hodum has the necessary knowledge and experience to complete this project. 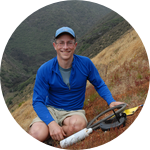 Our team of field technicians in the Juan Fernández Islands (JFI) is made up entirely of island residents trained and hired by our NGO, Oikonos. In addition, we collaborate with Juan Fernández fishermen who fish for lobsters in the Desventuradas Islands, north of JFI, and are interested in supporting our seabird conservation efforts. We are the only group conducting seabird conservation research in JFI and have 15 years of experience on the islands.

I am an associate professor at the University of Puget Sound and the Director of Chile Programs for Oikonos Ecosystem Knowledge. I became fascinated by seabirds when I had an opportunity to work as a field assistant on a study of Leach's Storm-petrels while an undergraduate student at Bowdoin College. Those tiny seabirds enchanted me, and my passion for seabirds and their plight has only deepened in the intervening 25+ years. Since that transformative experience, I have had the privilege of studying seabird ecology and conservation in incredible places, including Antarctica, Mexico, New Zealand, California, Washington and, of course, Chile. My long-term programs in Chile, where I have been working since 2002, focus on applied conservation research, habitat restoration and community-based conservation and education programs in the Juan Fernández Islands and Isla Mocha. In addition to my work in Chile, I study the ecology and conservation of islands and seabirds in Washington. I received my Ph.D. in Ecology from the University of California-Davis for work on the comparative ecology of four petrel species that breed in Antarctica.

2 Lab Notes Posted
Cameras retrieved, time to process!
About to collect cameras from the field