What ecological differences among bats on the San Juan Islands predict which ones are most vulnerable to habitat fragmentation? As land is converted, habitats are isolated and reduced, which greatly threatens biodiversity. Even though bats can fly, they rely on different foods and environments, and can be severely influenced by habitat fragmentation. Bats provide invaluable ecosystem services, such as natural control of many insect pests, and my research will help with their conservation.

The San Juan Islands are famed for their resident Orca population, and yet their smallest groups of mammals go almost completely unnoticed. There are ten bat species on the islands, but there is a paucity of information on their distributions, abundance, or seasonal movements.

This naturally fragmented landscape is ideal for investigating how different bat species are affected by habitat fragmentation. To understand whether ecological differences among species predict which ones are most vulnerable to fragmentation, I am studying the diet, distribution, and population genetics of bats across 20 islands & mainland Washington.

In addition to demystifying San Juan bats, I will provide much needed baseline information on Pacific Northwest bats. Moreover, understanding how bats respond to habitat fragmentation is vital for their conservation.

The natural pest control services bats provide is estimated be worth over $3.7 billion/year to the agricultural industry in the US alone. Despite their enormous value, bats are often misunderstood and understudied.

While bats are incredibly important for maintaining healthy ecosystems, their cryptic nocturnal habits make them difficult to study. As a result, we still don't understand many basic aspects of their biology and behavior.

Moreover, a novel infectious disease, is spreading across North America, threatening several species with extinction. It is critical to collect baseline information in unaffected areas before the disease arrives.

Investigating how bat species move through the landscape (e.g., population genetics) is also important for understanding how disease spreads.

The goal of this study is to investigate whether ecological differences among species explain which species are most vulnerable to habitat fragmentation.

1. Assess the distribution of bat species in a naturally fragmented landscape (San Juan Archipelago, Washington State). This will allow me assess the habitats in which different species occur.

2. Characterize the diet and foraging ecology of San Juan bats: this will allow me to assess how picky each species is in terms of where they hunt and what insects they eat.

3. Compare the population connectivity among bat species that have different dietary and environmental needs.

Ferry rides - Unfortunately there is no research waiver for the ferries, and the prices just keep going up! To survey among the islands and mainland Washington over the summer, we have to take many ferry rides.

Field assistant - This is critical! Having qualified help makes all fieldwork more efficient. Since I will be working at night, I need to have an assistant with me, for safety as well as efficiency -especially on remote islands. 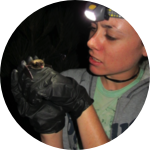 Rochelle Kelly is a Ph.D. student at the University of Washington, Seattle and specializes in bat ecology and behavior. She will be carrying out this project for her dissertation thesis. As an undergraduate she studied ecology and conservation biology at UC Berkeley.

A lot of people ask 'why bats?' Family, friends, strangers, and maybe even you. For Rochelle, there are many reasons. Bats are incredibly diverse. They are also ecologically important and possess incredible adaptations (a biologist's motivation). However, they are also terribly misunderstood, under appreciated, and in desperate need of advocates (an animal lovers motivation).

My research project on the San Juan Islands accommodates both of my passions: science and education. As I carry out my research project, I also help educate and inform the general public of my work, the importance of bat conservation, and the diversity of local bats.

Last year I led a variety of outreach events, including a bat walk in collaboration with the local land conservation group San Juan County Landbank. Using interactive teaching aids like thermal cameras and ultrasonic recorders, I am able to give the public a glimpse into the otherwise elusive lives of bats. I will be continuing these outreach efforts this summer.

Rochelle featured in an article about the BC Bat Blitz she volunteered to help with in May. 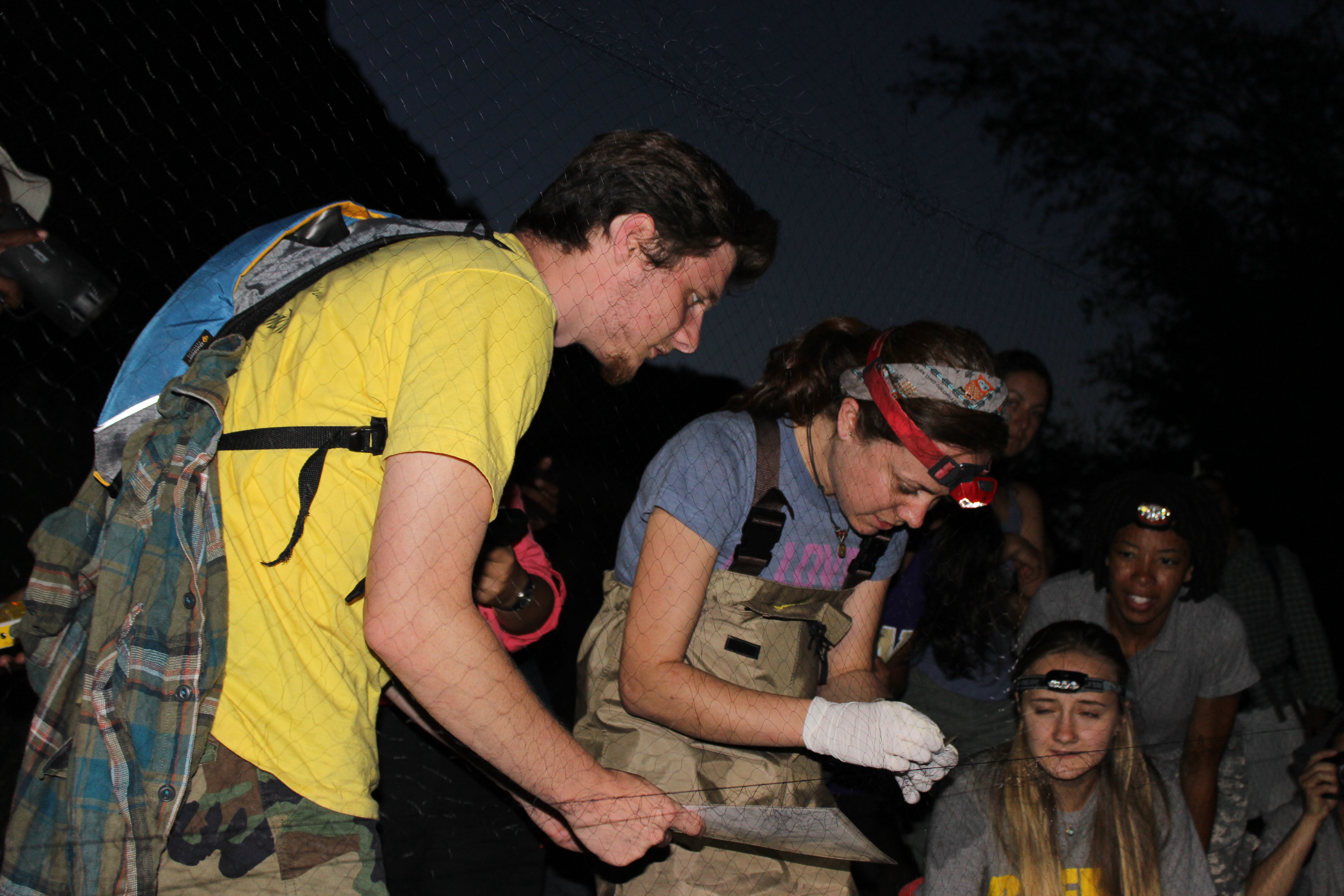 Teaching a group of undergraduate students about bat field biology, conservation, and ecology. 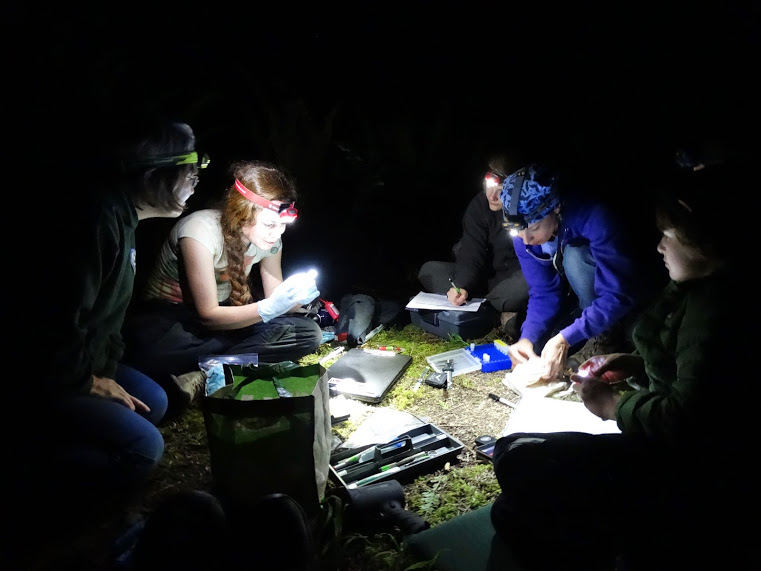 First survey of bats on the Vendovi Island Preserve 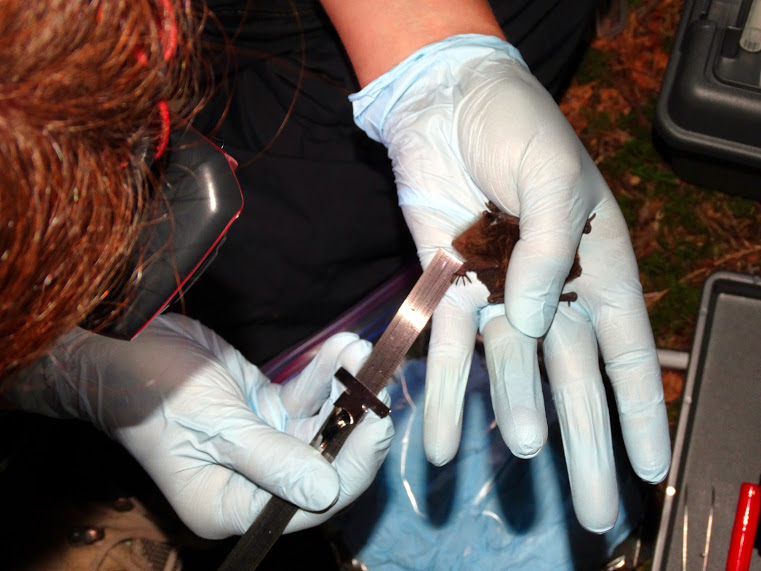 Measurements such as foot length are recorded and used to help distinguish similar looking bat species. 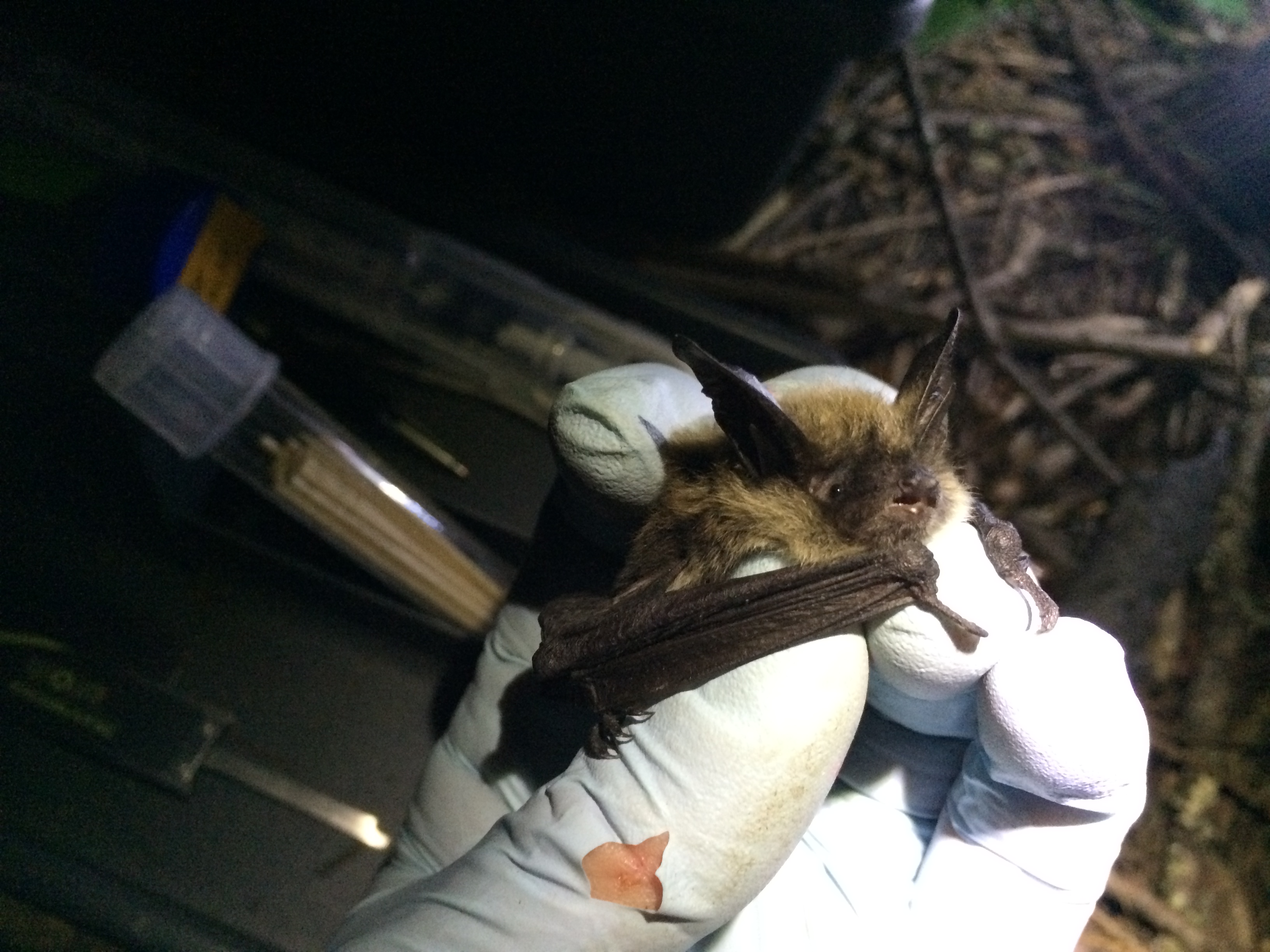 At first glance, many species in the genus Myotis may all look just like 'little brown bats'. There are six different Myotis species on the islands. As the name implies, the Western Long-eared myotis is distinguished from others by the length of its ear.