Therapeutics in any modality to combat Severe Acute Respiratory Syndrome Coronavirus 2 (SARS-CoV-2) infections are in urgent demand across the entire world as the Coronavirus Disease 2019 (COVID-19) pandemic continues to interrupt the well-being of human life. Without clinical therapeutics available for any of the human coronaviruses, a key starting point is to focus on target-based high-throughput screening (HTS) to reveal potent anti-SARS-CoV-2 hit-to-leads that are safe to human cells.

COVID-19 is a disease caused by a betacoronavirus known as SARS-CoV-2. The outbreak of COVID-19 originated in Wuhan, China in December of 2019 and the virus is easily transmissible by human-to-human interaction. Infected individuals can spread the virus by speaking, sneezing, or coughing, in which respiratory droplets containing virus transfer in the air and a different person inhales the aerosol. Respiratory tract infections generally result, affecting the nose, throat, sinuses, lungs, and windpipe. Symptoms of COVID-19 include fever, dry cough, and fatigue. Although most people who are infected have mild symptoms and will recover, there are high-risk groups. A major risk factor involves patients of older age (>60 years) and when these patients have pre-existing conditions.

In 2016, we began a collaboration with Dr. Artur Cordeiro, Laboratório Nacional de Biociências (LNBio), where an HTS campaign vs. glucokinase (a potential target of the protozoan parasite, Trypanosoma cruzi) was conducted and promising compounds were identified. My laboratory will now take part in a similar plan with Dr. Gustavo F. Mercaldi.

The principal goal for the project is to screen 30,000 small-molecule compounds using the technique known as high-throughput screening, or simply HTS, against a critically important target protein in SARS-CoV-2. HTS is a valuable and proven drug discovery tool. After identifying potent inhibitors, we plan to purchase a resupply of the same compounds to thoroughly analyze protein - inhibitor binding strength and effects on biological assays (i.e. anti-SARS-CoV-2 potency and host cell toxicity). Ultimately, effective inhibitors will be extremely beneficial since new starting points for drug leads will become available. The HTS screening will be performed at LNBio/CNPEM (Campinas, Brazil) by both Dr. D'Antonio and Dr. Mercaldi (LNBio Research Scientist and HTS Specialist).

The 10,000-compound library that will be purchased from this fundraiser will be combined with an in-house, non-overlapping 20,000-compound library, which will allow for a primary screen totaling 30,000 compounds in the HTS campaign. After running the primary screen and the corresponding counter screen (to rule out false hits), we will have identified on-target confirmed hits. A resupply of these hits will be purchased to further test them biochemically and through a biological assay.

The proposal by Drs. D'Antonio and Mercaldi, in which a 30,000-compound high-throughput screen will be conducted against a SARS-CoV-2 drug-target addresses a highly important need to identify promising inhibitors/inhibitor scaffolds since there are currently no advantageous therapeutics to counter COVID-19. This team of investigators is very experienced and qualified in medicinal chemistry and I enthusiastically support them and this work. Their findings will make a significant contribution in the field of coronavirus drug discovery. 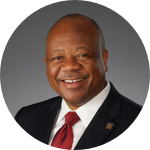 Al M. Panu
Chancellor
University of South Carolina Beaufort
The present proposal has very relevant goals in the search for new compounds that could be developed into new drugs for the treatment of COVID-19. The proposal is well written and clear in its aims. The experimental plan is adequate and the schedule is feasible. I know Eduard and his team members and I am very confident that they will work hard to fulfill all the proposed goals. 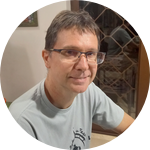 Celso Eduardo Benedetti
Dr
Brazilian Centre for Research in Energy and Materials
Dr. Ed D’Antonio and his partners in Brazil are positioned to make great strides in possible drug discovery. Dr. D’Antonio has already secured the funding to create an artificial gene construct to express SARS-CoV-2 products to assay against this massive high-throughput screening effort. This research is timely and could yield new therapeutics against COVID-19. I support this fund-raising effort to speed the start of this research. 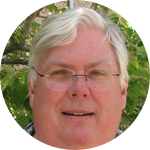 Joe Staton
Professor and Dean
School of Science and Mathematics, USCB
The proposal by D'Antonio and Mercaldi is highly relevant and timely. The project is well presented and completely fits in the expertise of the team. I know the work of both researchers and I very am confident that are capable to bring important findings to the field and consequently help in developing promising compounds against SARS-CoV-2. Based on the quality of the project, aims, and team, I am very happy to endorse this project and I hope it gets the necessary funding. 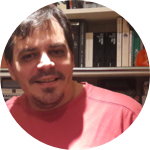 Marcio Vinicius Bertacine Dias
Assistant Professor
University of Warwick
The D'Antonio/Mercaldi team is at the cutting-edge of technology with this proposal. Their talents and the current opportunity to explore a wide diversity of possible inhibitors from the screening libraries against the SARS-Coronavirus-2 is without a doubt a necessity. I also know the high level of determination and skill that Dr. D'Antonio brings to any project he pursues. I know this team will have great success with this timely project. 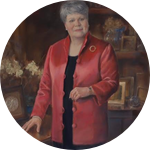 May 2021: Prepare a purified batch of viral target protein on-site at LNBio (Campinas, Brazil); run a primary HTS of 30,000 compounds against the target.

Purchase a screening library of 10,000 small-molecule compounds and ship to the HTS laboratory, LNBio (Campinas, Brazil). 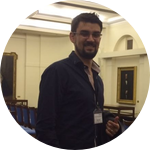 My training is in Chemistry and I received my Ph.D. at North Carolina State University in 2010. From 2010-2013, I was a postdoctoral fellow at the University of Pennsylvania where I was trained in structural biology and medicinal chemistry. I have published a total of 20 scientific articles/patents and I have mentored 22 undergraduates at USC Beaufort. In 2016, Dr. Mercaldi and I worked together on an HTS campaign, in which we ran a primary screen of 13,040 compounds against the target glucokinase in Trypanosoma cruzi (the etiological agent that causes Chagas' disease). We were successful in finding novel inhibitors and the manuscript of the project was published last year.

Since 2013, the goal of my research program has been to identify chemical compounds that inhibit protein targets of pathogenic microorganisms. The drug discovery strategies that I employ include structure-based drug design, structure-activity relationships, and high-throughput screening. Compounds are further developed by experimentally searching for higher efficacy and lower toxicity than clinically used drugs for the treatment of neglected tropical diseases.

As the coronavirus pandemic began this past March, my research focus has shifted towards the drug development to combat this novel virus, as well as MERS-CoV, SARS-CoV, and other viruses of the betacoronavirus family that have the potential to cause epidemics. In collaboration with Dr. Gustavo Mercaldi, this proposed research project will particularly involve the screening of a key viral protein target in SARS-CoV-2 against two separate compound libraries totaling 30,000 compounds. We expect to observe inhibition from a fluorescence-based assay. Identification of potent inhibitors will permit drug candidates to proceed through a viable drug discovery pipeline.

In 2003, I started my formal education in Pharmacy, and until its conclusion in 2007, I started working on academic and research activities. From 2008-2010, I was a student in the Master’s Program of Biomolecular Physics in São Carlos Physics Institute (IFSC) from the University of São Paulo (USP). From 2011-2014, I developed my PhD in the Brazilian Biosciences National Laboratory (LNBio) from the Brazilian Center for Research in Energy and Materials (CNPEM/MCTI). In this period, I worked with projects relating to the identification of bioactive compounds by high-throughput screening (HTS), and biochemical & structural characterization of protein-ligand complexes. In 2014, I moved to Dundee (Scotland, UK) to develop on an additional component of my PhD project in the College of Life Sciences from the University of Dundee. After returning back to Brazil in 2015, I obtained my PhD in Biosciences in the Institute of Biology (IB) from University of Campinas (UNICAMP) in 2016. In the same year, I was awarded a postdoctoral fellowship to make research developments in LNBio/CNPEM, a research project to study protein translational machinery aiming to support structure-based antimicrobial development. Since 2018, I remained a Brazilian National Laboratory Researcher at LNBio/CNPEM.

Summary of Experience: Background in Pharmacy and Biophysics, with a focus on HTS, characterization of biologically active molecules, production, and purification of recombinant proteins, enzyme kinetics, structural biology, and the manipulation of pathogens. 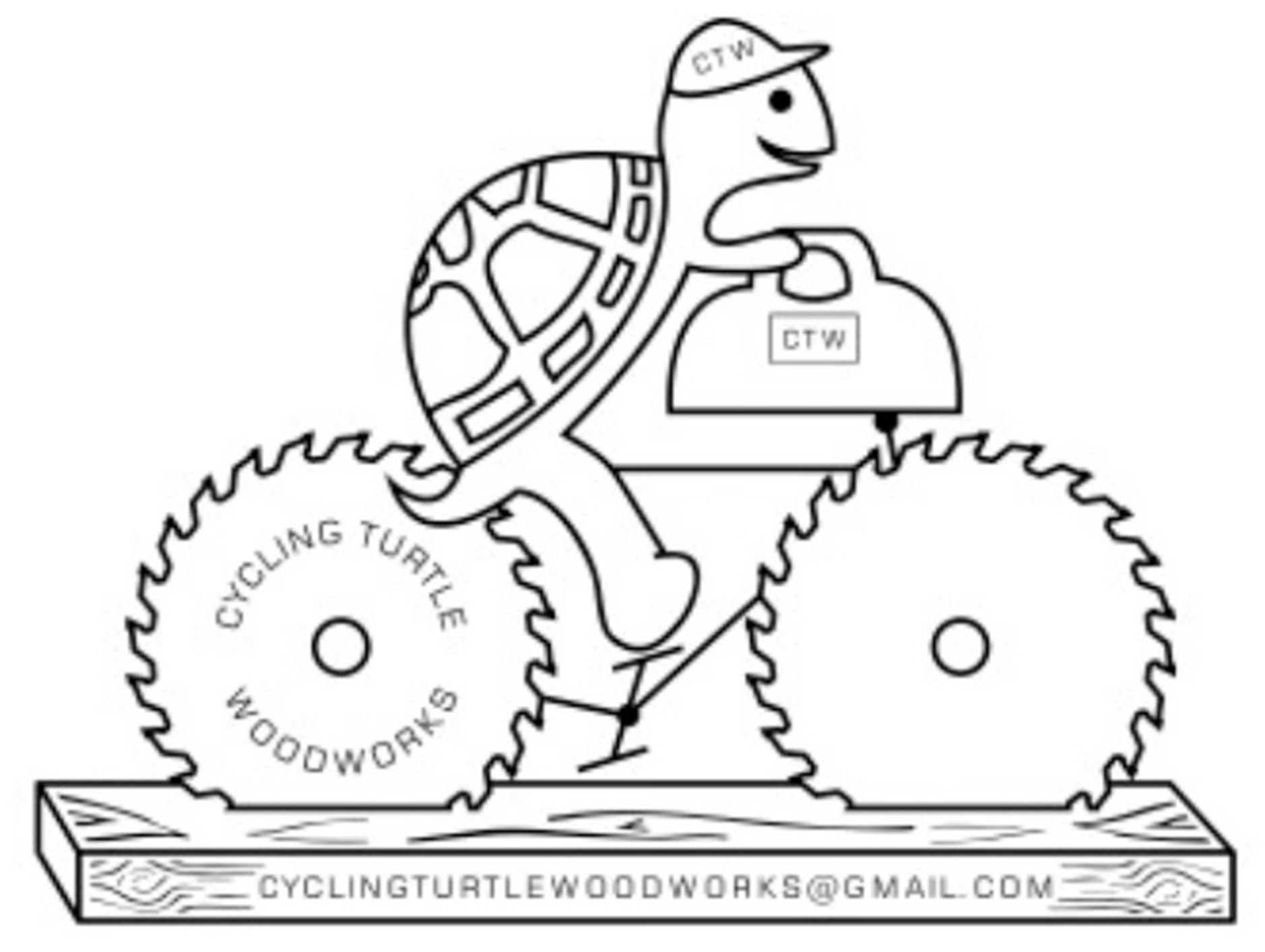 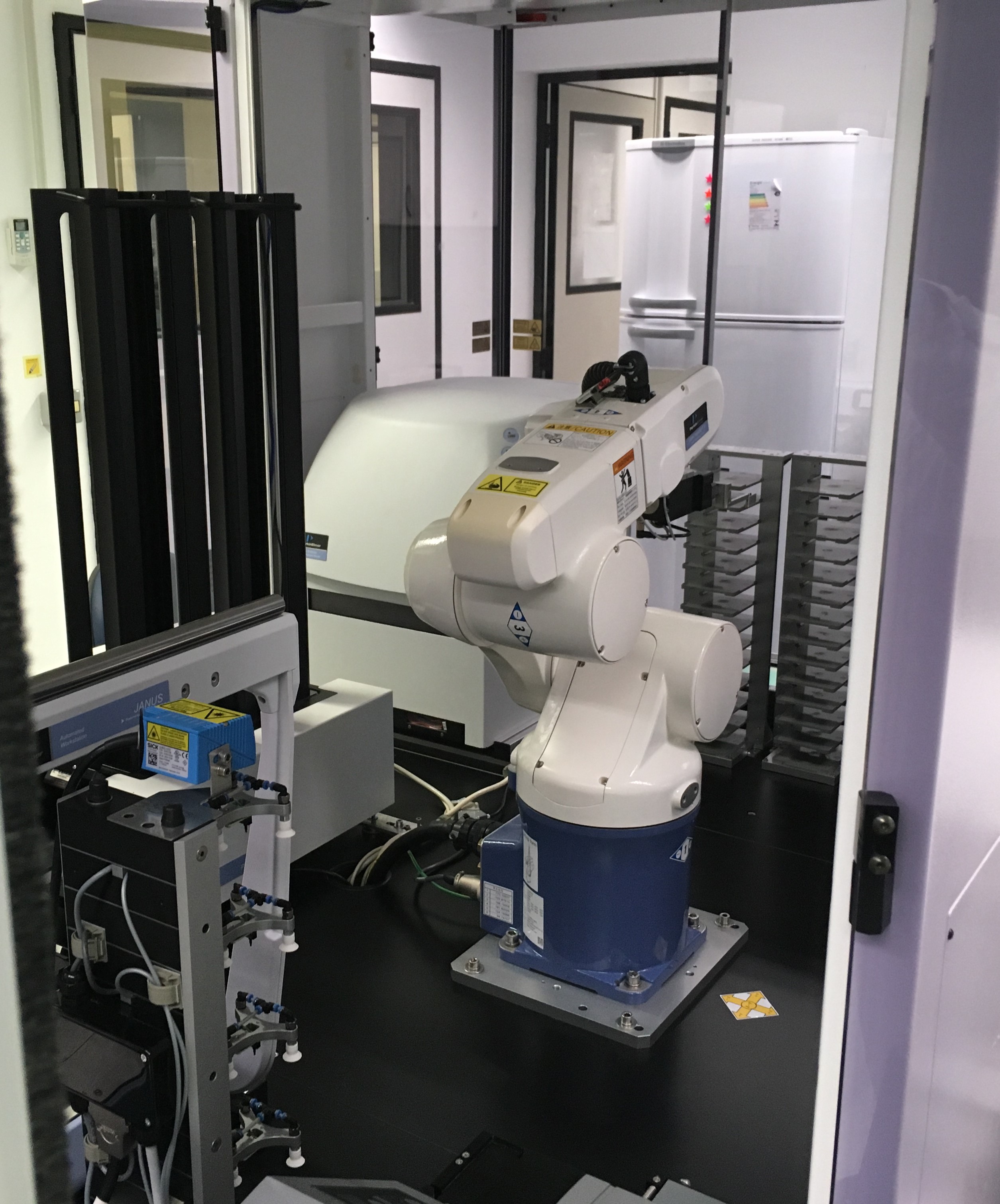 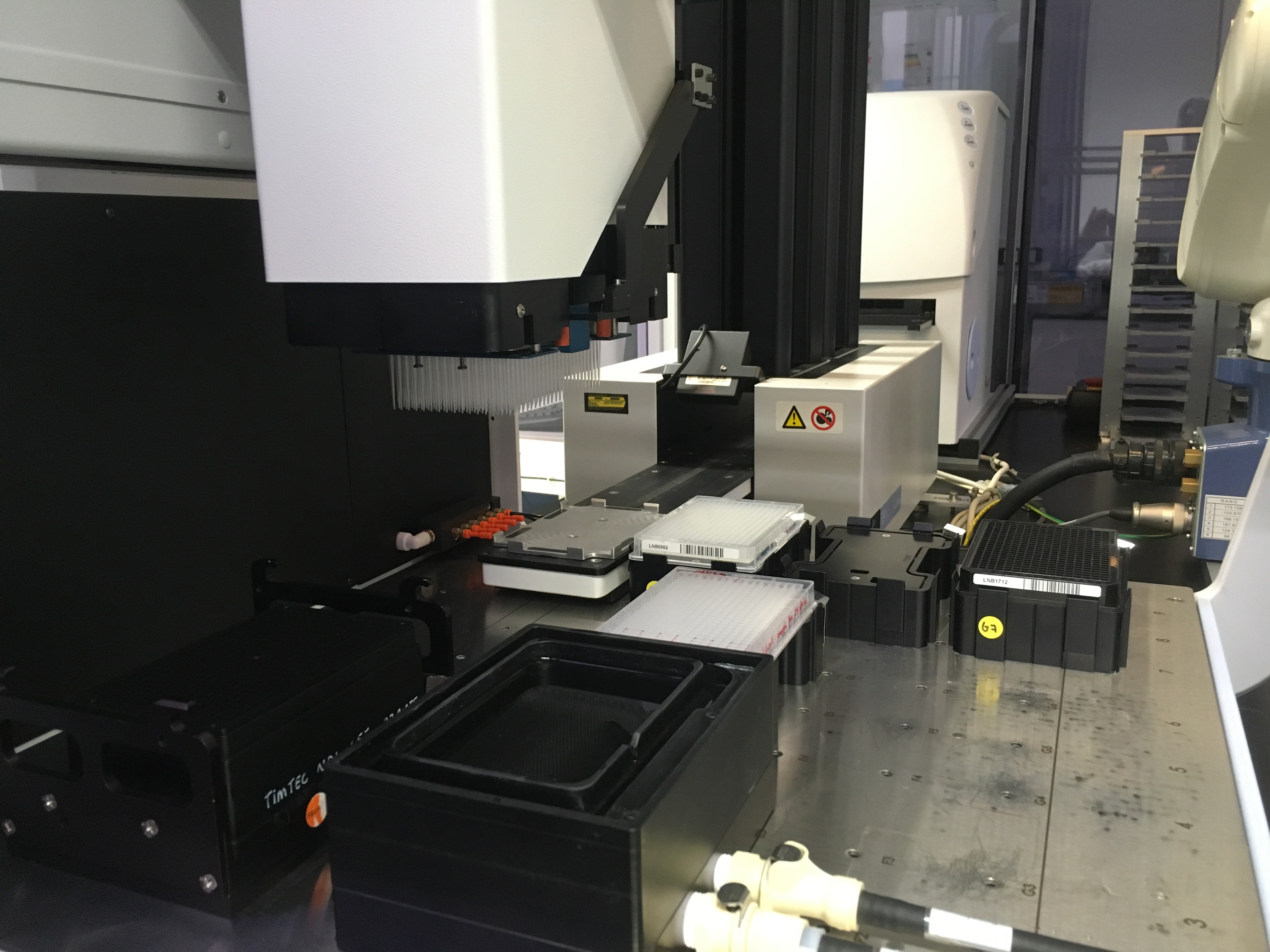 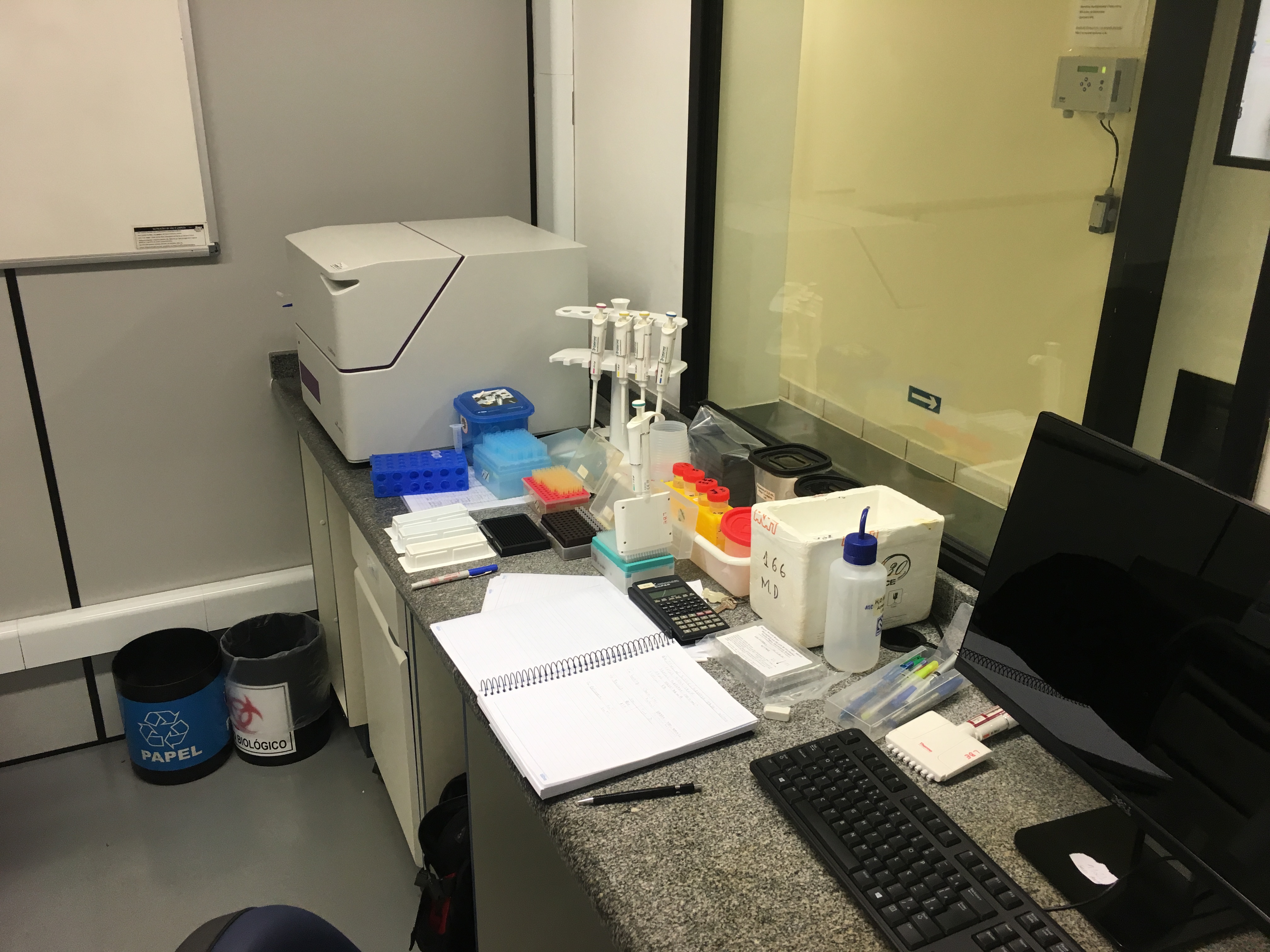 Setting up for HTS 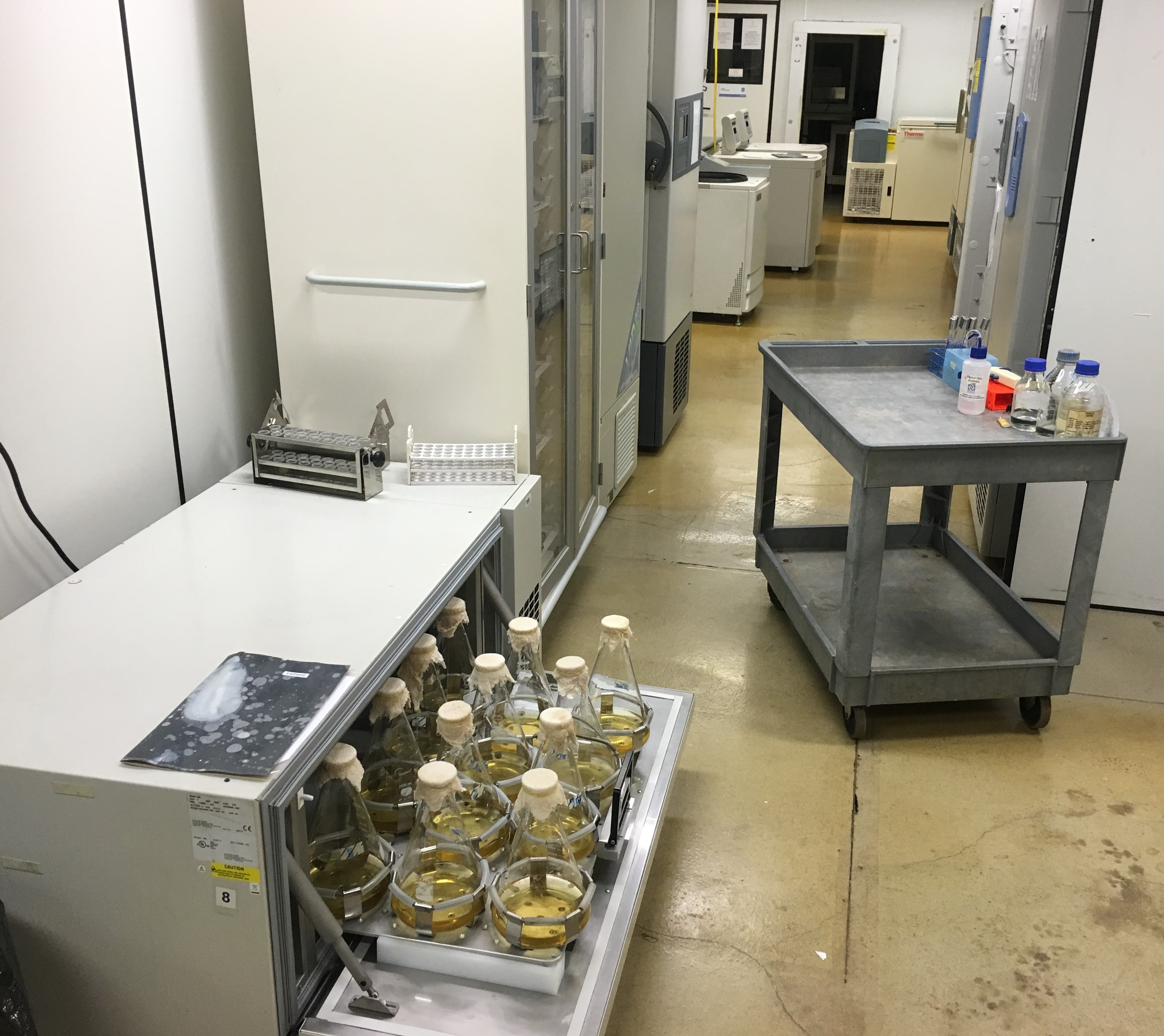 An HTS robotics system that allowed for a 13,040-compound HTS campaign. This project took place at LNBio with Drs. D'Antonio and Mercaldi who worked on screening a potential drug-target called Trypanosoma cruzi glucokinase. The same system will be used in this project for the 30,000-compound HTS screen.
Mercaldi, G. F., D’Antonio, E. L., Aguessi, A., Rodriguez, A., and Cordeiro, A. T. (2019) Discovery of antichagasic inhibitors by high-throughput screening with Trypanosoma cruzi glucokinase, Bioorg. Med. Chem. Lett. 29, 1948-1953.