The Hawaiian happy face spider, T. grallator, is known for its striking color polymorphisms (variations within species), which include variable configurations of red, black, and white superimposed on a yellow background. We will use genomic sequencing to identify the genes responsible for color and pattern variation. This is interesting not only because the polymorphism is maintained across several different islands, but because other arthropods display similar patterns in the Hawaiian forests.

The happy-face spider is a classic example of polymorphism (showing a variety of patterns) in nature, but there have been few studies to examine this at the gene level in arthropods. In the happy face spider, we observe the repeated evolution of color and pattern, also known as convergent evolution. From previous work, we know that the same color and patterns have evolved on different islands, but through different genetic mechanisms. This demonstrates that nature has come up with the same solution in different ways. Additionally, we know that two-thirds of a happy face population are yellow individuals and one-third is patterned. Researchers have hypothesized that this ratio is driven by a predator search image, but we can learn more by looking at the genetic code!

Understanding how diversity arises in natural systems is a pressing question, but until recently we have lacked the genomic and genetic resources to understand underlying evolutionary patterns. Using a genetic approach in happy-face will provide insight into genes which underlie color variation in arthropods and how morphological changes reflect ecological adaptation, which can lead to diversification. The past work on happy face makes it an ideal system, because we know how genes are inherited on each island. It is important not only to conserve our present species, but to understand how the diversity we see today was produced. In systems such as happy face, we have a unique chance to follow along with evolution, which can provide answers into ensuring its future survival.

The goal of this project is to identify gene loci or genomic regions associated with color and pattern variation in the happy face spider. We will use the high-quality genome obtained through this work and previously collected data to identify regions associated with color variation. From this, we will be able to understand the underlying genetic mechanisms which produce different colors and patterns. Additionally, we can gain insight into how selective pressures contribute to maintaining the amazing variety of morphs in the happy face. We hope to use this iconic species to communicate how important genomics can be to understanding diversity and hope to provide a basis for other researchers to understand how color and morphology may function in other arthropod systems.

We will use two types of genomic DNA libraries in order to produce a high-quality genome assembly. The first library (paired-end) will produce small, overlapping sequences that span the genome. The second library (10X) will produce long-range information to help put the short sequences into larger pieces. The eventual goal of this process is long, continuous stretches of DNA. The genome will be combined with existing genetic data from two morphs of the happy face spider: the plain yellow morph and the happy face morph. We will first overlay the genetic data from the two morphs onto our complete genome. Then, we will search for regions of the genome that explains the genetic variation we see between morphs. A high-quality genome is critical for this step because if a variable region maps to an uncharacterized region in the genome, we will not be able to identify the genes responsible for color variation.

This project is exciting and well deserving of funding! The happy face spiders are an iconic example of diversification within the Hawaiian Islands. Determining the genetic basis of the color polymorphism in these species will provide a unique opportunity to advance our understanding of this group. Ellie Armstrong and Stefan Prost are rising stars in evolutionary genomics research along with Rosie Gillespie who provides the long-term expertise in this exciting system. I highly endorse this project. 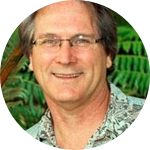 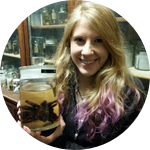 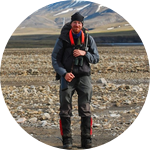 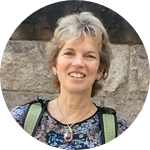 Our research team consists of Ellie Armstrong, Rosemary Gillespie, and Stefan Prost. As an undergraduate at Berkeley, Ellie took a spider biology class with Rosie and then began working in her lab. They have continued to work together for the past several years on projects that span ecology and evolution in the Hawaiian Islands. Stefan got involved as a post-doctoral researcher at Berkeley, where he collaborated with Rosie's lab on genetic and genomic work in Hawaiian arthropods.

My name is Ellie and I am a new PhD student at Stanford University working with Dmitri Petrov and Liz Hadly. It is my goal to combine ecology and genomics in order to gain a better understanding of how species diversify. More specifically, I am interested in species in adaptive radiations which occur frequently on islands (such as Hawaii!). Most of my work so far has been on Hawaiian picture-wing Drosophila and other Hawaiian lineages, which I believe are super important to understand evolution and variation. In addition, bringing attention to the awesome diversity in Hawaii can help us to protect those ecosystems. I am also involved in projects which aim to make genomic techniques available to researchers in the field so that we can more easily track and identify animals without having to catch or trap them. I have a strong background in bioinformatics, genomics, and ecology. Previously, I received a B.S. in Molecular Environmental Biology from UC Berkeley, and received an M.S. from the University of Hawaii at Hilo, where I studied genomic evolution in picture-wings.

My name is Stefan, I am a postdoc in Dmitri Petrov's lab at Stanford University and a visiting researcher in the lab of Noah Whiteman at the University of California, Berkeley. I am interested in how species adapt to new or changing environments on the genome level. Decrypting the information stored in the genome of an organism starts with a good genome assembly. Spiders show exciting adaptations to the environment they live in, but also have notoriously difficult genomes. I am really looking forward to the challenge of reconstructing a high quality genome for the happy face spider and studying its diverse and exciting color pattern. Beside spiders, I work on genome assemblies throughout the tree of life and evolutionary genomics of birds of paradise, foxes and other vertebrates.

I am a Professor at the University of California, Berkeley, and Schlinger Chair in Systematics. I am married to George Roderick, who studies invasive insects, and have two sons, Will and Mel, who are now in college. I was born and educated in Scotland, and received a B.Sc. in Zoology from Edinburgh University in 1980. I came to the U.S. to conduct graduate work on the behavioral ecology of spiders at the University of Tennessee. After my PhD I spent several months at the University of South in Tennessee, and then started work at the University of Hawaii in 1987, initially as a postdoc, and then in 1992 as Assistant Professor in Zoology and Researcher in the Hawaiian Evolutionary Biology program. In Hawaii, I started working on happy face spiders, and also discovered an adaptive radiation of long-jawed (Tetragnatha) spiders. I joined the faculty at the University of California in Berkeley in 1999, where I continue to focus my research on the islands of the Pacific as microcosms for studying how biodiversity forms and goes extinct.

For the Hawaiian happy face spider, we have shown that the so-called “exuberant” color polymorphism is similar in all populations across the different islands where it occurs. Interestingly, the genetic basis for the color polymorphism has changed as they have established new populations on new islands, with selection acting to recover the diversity of color forms from the few individuals that colonized the new island. What is the molecular basis for this change? Our team has a system, as well as the tools and expertise, to answer this question, and hence resolve the age-old question: How is diversity recovered subsequent to a population bottleneck?

Here is a video of Rosemary Gillespie speaking at Harvard about happy face spiders, outlining the diversity and what research led us to our current questions!

You can keep up to date with our research at our blog, where where we will talk about everything spidery, including this research! We have some really cool guest bloggers lined up, so stay tuned and please feel free to ask questions! happyfacespider.blogspot.com

We will reward you for backing! Any donation will receive a happy face spider postcard or magnet with a photo taken by Hawaii wildlife photographer, Nate Yuen. These images are unique and beautiful and we thank Nate for his contribution and dedication to all of Hawaii's native plants and animals. Pictured above is some cool swag from Hawaii Volcanoes National Park, featuring the happy face.