Hyperpolarized xenon is produced in a two-step process in which angular momentum is transfered from light to an alkali intermediate, and from the alkali intermediate to the xenon nucleus. Current state-of-the-art techniques utilize a "flow-through" system in which the xenon gas is flowed through a reaction cell and is polarized in transit. The reaction cell consists of a transparent (usually glass) cylinder

Even with new techniques to introduce rubidium into the gas stream, after very short use, the reaction cell will become contaminated with a visible amount of rubidium.

Laser light sources have been increasing in power over the last few decades. The highest powers currently being used are in excess of 200 W. Experimentally, it is know that these sources can severely heat the reaction cell as to vaporize the rubidium in uncontrolled ways.

The code for this project uses ElmerFEM, an open source finite element project developed by researchers at CSC-IT Center for Science based in Espoo Finland. Much of the design of the FEM simulation is based on the ideas developed by Fink et. al (2005 and 2007) in their papers on FEM models of static and continuous flow hyperpolarized xenon. Those models used COMSOL software to develop and run the models. The use of ElmerFEM and the public release of the code on GitHub will (hopefully) encourage the use of FEM for HP gas and optical pumping researchers as use of the code is substantially less expensive.

Fink et. al considered half-cylindrical geometries in most of their studies. Although computational simpler, nuances of the full 3D simulation may provide important insight into the dynamics of optical pumping. In addition, these simulations will attempt to model the heterogeneous distribution of the rubidium vapor in the optical pumping cell and the effects of laser heating on evaporation rate of the rubidium liquid on the body of the cell.

Testing will be done on the attached geometries. The geometries are meant to replicate a small (100 cc) horizontally-oriented reaction cell. This geometry was one of those considered by Freemen et al. (2014) in their study that identified the discrepancy between predicted and actual efficiencies. Thus, the project can directly compare the simulated results to the measured efficiencies in this geometry.

The second geometry (Figure 2) is identical to the first except that the rubidium source only extends as a half cylinder around the central region of the cell. This geometry may be appropriate because gravity and convection currents may favor distributing the liquid rubidium towards the bottom of the cells. 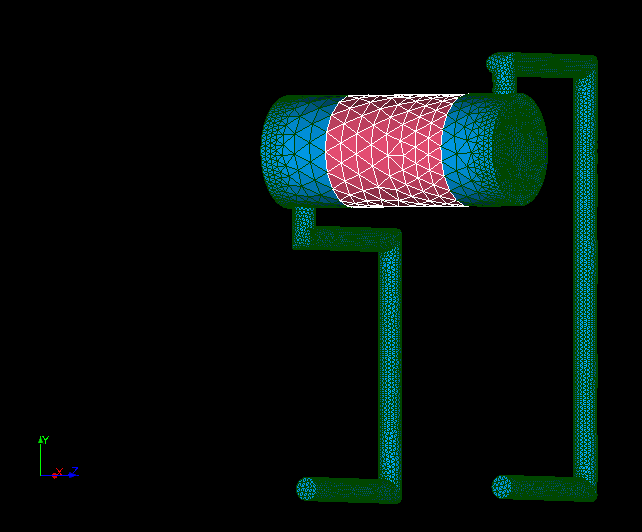 Figure 1: The first geometry used in the study. It is meant to replicate a 100 cc reaction cell like those used in Freeman et al. (2014). The light source is directed in the -z direction. The portion in red is the modeled distribution of the rubidium source (film) inside the cell. This geometry is designate FullFilmRb.

Figure 2: This is the second geometry used in the study. The geometry is identical to the first geometry expect that the rubidium source (shown in red) only extend around the lower half of the reaction cylinder. This is meant to simulate the effects of gravity which would likely cause the rubidium to pool in the bottom portion of the cell. This geometry is designated HalfFilmRb.

The largest anticipated challenge is that of substantial disagreement between the modeled and observed efficiencies or the model producing non-physical results. There have been some hints that this possibility during the development of the model (during initial testing when attempting to solve the steady-state problem, the model sometimes produced oscillatory behavior that predict internal temperature in excess of 1000 degrees Celius).

To attempt to account for this possibility, the project plans to test an initial set of conditions. After those results are analyzed, if there are clear problems with the modeled results, modifications can be made. If funded, there should be enough run time to repeat all the initial simulations with a modified model.

During development of the model, I developed an analysis template using Paraview visualizations. That template is the basis for the videos of the visualizations in the "Overview-Additional Information" section of the proposal. The template takes output from the Elmer Model and calculates pertinent quantities: internal temperature, gas flow lines, laser power absorbed, rubidium number density and polarization, and output xenon polarization. Paraview can also be used to visualize a particle-flow model to better understand the flow patterns in the optical pumping cell.

The models in the horizontal orientation will be compared to values recorded by Freeman in a similar geometry under similar conditions. The analysis will include comparing the predicted laser power absorbed and the predicted xenon polarizations.

It is hypothesized that lower-than-expected efficiencies in production systems can be explained by poor rubidium distribution and poor flow-patterns. Practically speaking, it is hypothesized that the simulated xenon polarization will be much lower using the full fluid and thermal dynamics of the system as compared with the simulations reported by Freeman et al. (2014).

Additional analysis of the simulations are hypothesized to reveal channeling of the flow through the production cell. This channeling will severely limit the resident time of the xenon in the optical pumping cell.

Other analysis is hypothesized to indicate severely heterogeneous rubidium distribution that absorbs light in a non-productive manner, i.e. the majority of the rubidium vapor and associated absorption is in volumes of the cell where the xenon is NOT channeled and cannot productively interact with the rubidium.

Finally, it is hypothesized that the vertical orientation of the reaction cell will produce more favorable flow patterns and higher xenon polarizations. Anecdotally, flow-through systems using a vertical configuration tend to have polarizations that are higher and closer to values predicted using simpler computational models.