Surprisingly, it has yet to be shown if octopuses can use odors to find food, it is often assumed that they can. We are investigating odor tracking in Octopus rubescens by observing them searching for food in a flume in the dark under consistent bulk flow conditions. This basic behavioral ecology research aims to fill a significant assumption gap in the current understanding of octopus chemosensory ecology. We need help paying for a scanning sheet laser to visualize flow.

The neural architecture of Mollusca began diverging in the pre-Cambrian from their common ancestor with Vertebrates and Arthropods. The use of chemosensory organs in navigation has even been hypothesized by some to have driven the evolution of early evolved brain structures. Cephalopods appear to lack glomeruli entirely, and likely use divergent strategies for integration of chemosensory information from arthropods and vertebrates. Recently it was shown that they have a unique class of chemo-receptors in their suckers. The scope of basic research on Octopus chemosensory ecology is limited. Our work is fundamental to understanding a basic aspect of octopus chemical ecology.

Practically all motile organisms, from bacteria to complex multicellular lifeforms, orientate to and track chemical gradients or plumes; this ability likely played a significant role in determining the fitness of early Bilaterians. There is currently an assumption in the literature on octopus olfaction. First, that octopuses can track plumes and second that their olfactory organs are used to do it. Understanding the sensory ecology of organisms including how they use olfactory cues is important to improve interpretations of their role within ecosystems. This work will be part of the story describing the octopus chemosensory landscape. With hundreds of chemosensitive suckers and associated network of sucker ganglia the octopus chemo-sensory system is worth understanding.

Using DeepLabCut a python deep learning tool for markerless tracking of animal posture, laser sheet flow reconstruction, and a wide and long flume we can parameterize postures and trajectories, overlay them on a reconstructed plume and investigate our assumptions using non-invasive observations. By repeatedly watching search strategies of octopuses in presence and absence of an odor plume we can see if octopuses use odor cues to find food. Using the scanning sheet laser system funded by this project we will for the first time use state of the art flow imaging techniques to investigate the chemical ecology of octopus.

We are conducting the work on San Juan Island at the University of Washington, Friday Harbor Laboratories. The laboratories have a open circuit seawater system that allow us to care for native species of octopus and do high throughput behavioral ecology studies while operating on a shoe string budget. We collect local species of octopuses using open circuit SCUBA. To the best of our ability we then live release them. This summer we built a large and shallow turbulent flume to simulate naturalistic flow conditions. We would like to build a scanning sheet laser system so we can digitize flow conditions within the flume. A critical component of understanding how organisms use the information in odor plumes is being able to describe the plumes with a high degree of numerical accuracy. This scanning sheet laser system will enable us to describe the flow within our flume and shine light on information integrating mechanisms used by octopuses.

This is a novel experimental set-up by a brilliant grad student to answer some key questions about how an octopus forages. Its slick methodology for tracking marine animals in the dark should prove useful to others. I look forward to Willem's neat, mesmerizing videos of how a trained neural net follows these amazing creatures in a modern Skinner box for cephalopods 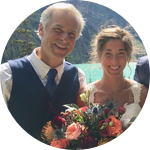 Roman Dial
Professor of math and biology
Alaska Pacific University
My endorsement is for Willem who is my nephew and for any project that he puts his amazing mind to work on. I have worked for 24 years at a global aerospace company and have personally worked with hundreds of the smartest people at the company, however rarely have I witnessed others with such boundless intellectual abilities and an innate curiosity for science. This project is surely the beginning of many to come that will make a real difference. 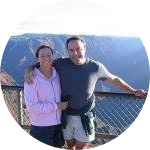 Benjamin Miller
Senior Analyst, Business Transformation
The Boeing Company
As the mother of Willem I have first hand knowledge of his singular intelligence. His ability to focus is remarkable, combined with encyclopedic recall skills, will render academic excellence. As a retired OBGYN researcher, teacher, physician and surgeon, I see in Willem myself and my father, who was a pathologist and a humanist. Willem truly can do anything he chooses and it is not surprising he finds the clever octopus a worthy subject. 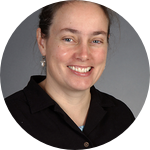 Leslie Miller Weertman
M.D.
I've had the privilege of not only watching this project move from inception to reality, but to work with Willem in some of the design and problem solving elements. Willem is a methodical problem solver who immerses himself both mentally and physically into a project in a way the avoids mistakes and assures success. Willem has proven to be able to do amazing things with very limited resources. The octopus project is extremely interesting and is well worth your support. Willem will be sure to make your contribution go a long way! 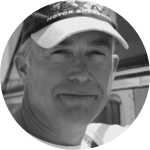 Doug Engel
Maintenance Supervisor
Friday Harbor Labs
I'm greatly impressed with the progress Willem has made on this project. I've seen it go from an idea to a full fledged interesting and compelling experiment. As a professional programmer of 28+ years I'm amazed with the software that he has developed. 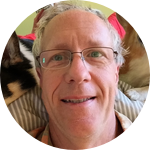 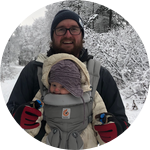 Ben Wilkins
Adjunct Professor and Diving Safety Officer at APU
Marine and Environmental Sciences
This is an exciting experiment conducting developmental research on one of natures enigmatic creatures. Willem brings an exceptional focus, intellect, and mathematical approach to video and imagery analysis in a desire to shed light on scent tracking in octopus. His ongoing work will be greatly enhanced with this equipment by quantifying/visualizing scent plumes in the tank, in relation to the study animal and to it's movements in the presence of the plume. This equipment and the data it will produce represent money well spent. 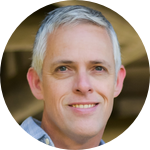 Claude L Dykstra
Research Biologist
This project will be an invaluable step forward in understanding the biology of octopuses. WW has the both the motivation and abilities to complete the work, and the the laser light sheet is a crucial piece of equipment for revealing the patterns of scents the octopus may be responding to. The findings will add another piece to the puzzle of how the brain and nervous has evolved to control the behaviour of these remarkably sophisticated animals. 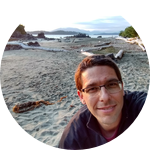 Russell Wyeth
Associate Professor
St. Francis Xavier University
Willem has conceived an exciting project on the edges of what we know about octopus sensory experience - despite the interest in how octopuses perceive the world, little work has ever been done on how their behavior is tied to the chemical sensory ability. Willem is getting excellent behavioral data and needs the ability to visualize the plumes in the water that the octopuses is tracking. Funds for the laser will allow him to fill in that side of the experimental design, and complete a fascinating study. 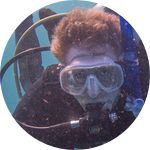 David Scheel
Professor of Marine Biology
Alaska Pacific University
I think the information discovered from this project will add a very interesting chapter to our knowledge of how animal life obtains the food it needs for existence. With both an interest in marine life and a mastery of computer skills, Willem Weertman is certainly the right person for the task. 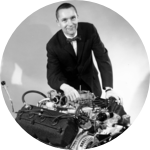 Over the course of winter and spring 2021 we will order parts for the scanning sheet laser system and build it. During the summer of 2021 we will use the laser to digitize flow conditions within our flume and overlay that data upon our labeled data of octopus motion.

Digitize flow conditions within the flume and overlay the digitization of flow on our labeled data of octopus motion. 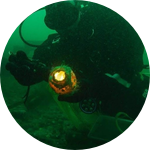 Willem is a Masters of Science in the Environment student at Alaska Pacific University. He got a Bachelors of Science in Oceanography and a minor in Marine Biology at the University of Washington. He has been returning to the Friday Harbor Laboratories annually since 2017. His primary advisor is Dr. David Scheel at Alaska Pacific University who has been studying octopus ecology for more than two decades. For his Masters Thesis Willem is investigating octopus odor tracking at the Friday Harbor Laboratories.

6 Lab Notes Posted
In case anyone needed some cool octopus photos
Hey everyone! I hope you all are having a fantastic...
New favorite clip! An octopus appears to be tricked by...

The octopus Slaanesh foraging in the dark finds a piece of shrimp from one of three possible locations on the first try. In the flume tank water moves from right to left, the space is in a black out tent and illuminated by near-infrared lamps invisible to the eye but not cameras. 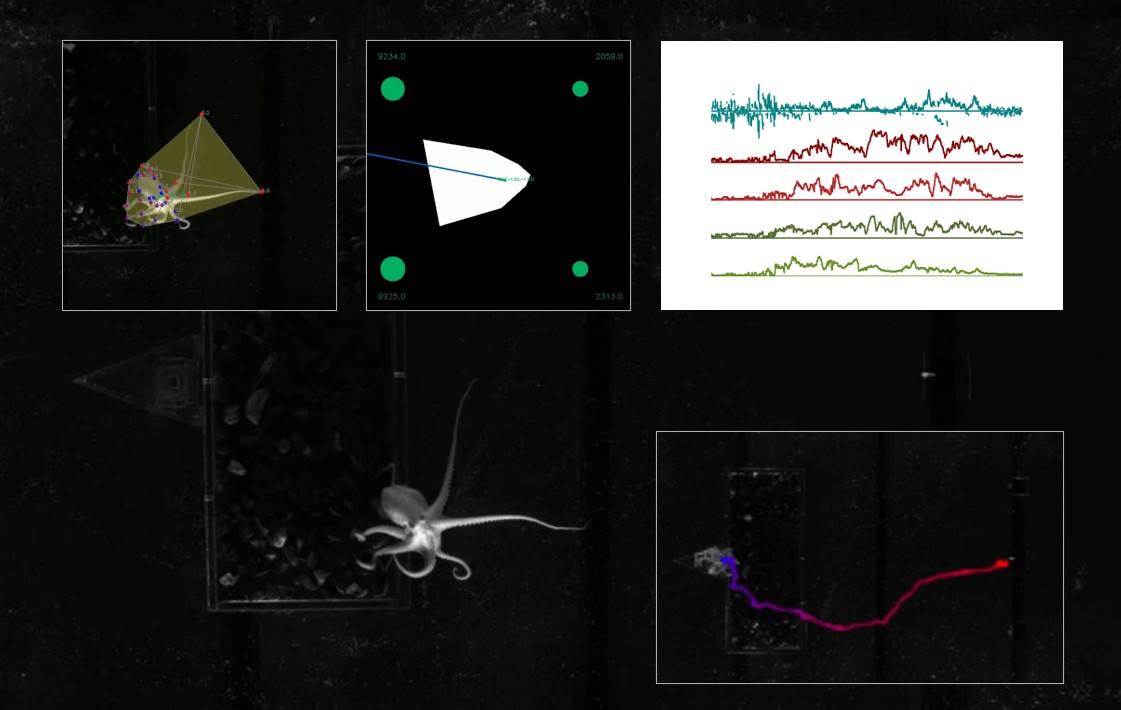 Example of what can be tracked by a custom trained markerless pose estimator DeepLabCut model. In the top left you can see the convex hull of the points predicted by the model. Top middle is the convex hull rotated into the reference frame of the octopus. Top right shows a plot of the center of mass velocity on top and the area of the convex hull of the four quadrats around the octopus, forward left, forward right, back left, back right. Bottom right is the trajectory taken by the octopus during a short sequence of motion thought to be odor tracking.

Above video is shows an octopus tracking an odor plume with some overlaid data. Convex hull (yellow polygon) of predictions created by DeepLabCut. A green arrow indicates the velocity vector for the moment to moment motion of the mean location of the eye predictions. A jagged blue curve describes the area the convex hull, a yellow curve overlaid upon it shows the a linear generalized additive model (GAM) tuned and fitted to the area curve. A small dot changes from red to white and back as the area of the convex hull as fitted by the GAM increases and decreased. 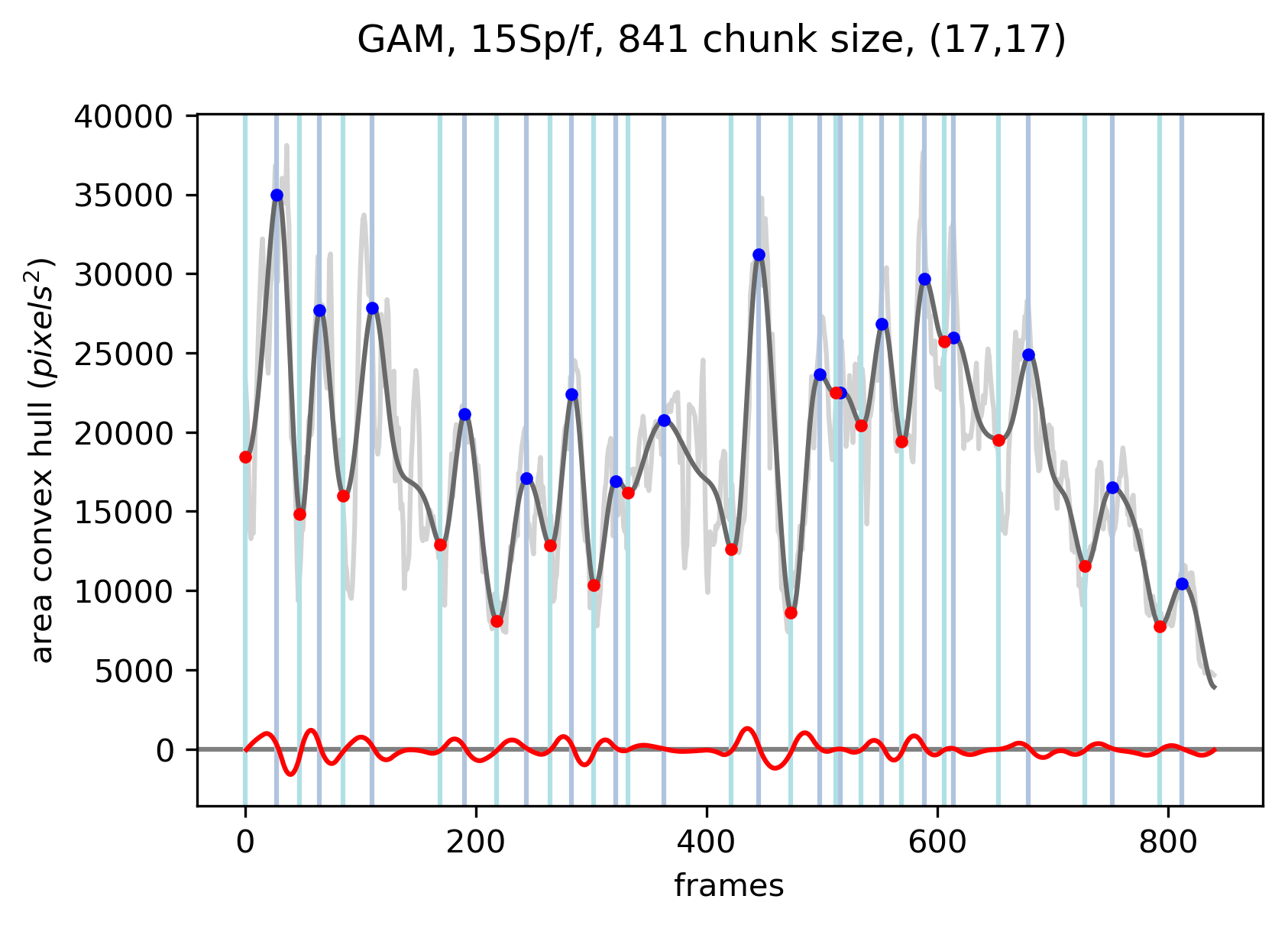 Above image showing one of many failed attempts to use bright field illumination and the open source python library OpenPIV to digitize flow of an injected odor plume within the flume. Particle imaging velocimetry (PIV) requires use of a laser sheet to be accurate. 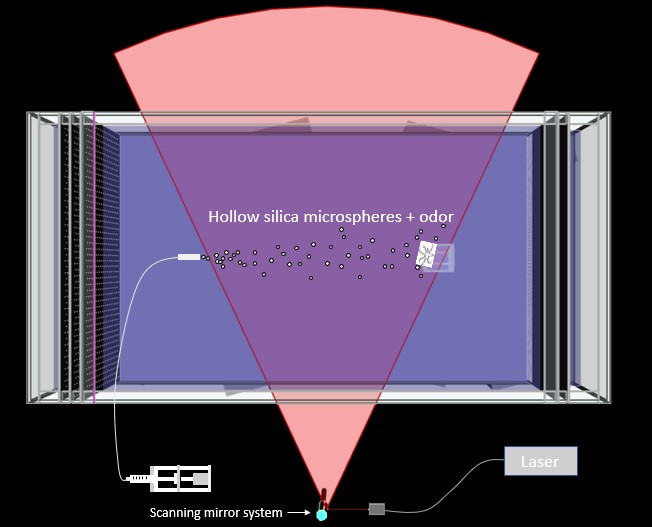 The proposed scanning sheet laser system we would like to build to digitize the odor plumes within our plume. The system consists of a laser source, a fiber optic beam delivery system for the laser, and a precision rotating mirror system.