During the mass nesting of sea turtles, thousands of turtles emerge from the ocean to lay their eggs along a small stretch of beach. Despite our fascination with this natural phenomenon, almost nothing is known about how sea turtles manage to synchronize their behavior in this way. Our experiment will test whether sea turtles use olfactory cues to coordinate mass nesting behavior. Our results will inform conservation management to protect the future of this incredible natural phenomenon.

Although this natural phenomenon has captivated our attention for decades, almost nothing is known about the mechanisms that enable turtles to synchronize their behavior so that thousands emerge from the sea to lay their eggs at the same time and place [1]. One possibility is that mass nesting is coordinated by chemical secretions, known as pheromones, that influence the behavior of other individuals [2, 3]. The idea that a rising level of pheromones in the water might trigger mass nesting is plausible given that reptiles have well-developed olfactory senses and can perceive diverse chemical cues, including some that involve social behavior [4]. Our pilot experiment (featured in our video) tested an alternative low-cost approach and identified the need for the use of tracking technology.

This unique and fascinating behavior occurs at only several beaches in the world and several mass nesting populations have disappeared due to overexploitation [1]. Given the difficulty in predicting the timing of mass nesting events, local authorities struggle to control the sporadic tourism that coincides. In fact, our study site recently received international attention for its failure to control tourists [5]. By tracking sea turtles and increasing our knowledge of the mass nesting behavior, our experiment will allow management to predict events, identify potential threats, and allocate limited funding and resources more appropriately to ensure the future of this incredible natural phenomenon.

We will test whether sea turtles use olfactory cues (such as pheromones) to coordinate mass nesting behavior. We will capture female sea turtles in offshore waters in the days just prior to an expected nesting event. We will randomly treat the nostrils of these sea turtles with either ZnSO4 or saline. ZnSO4 temporarily interrupts olfaction in marine turtles without harming the turtle or affecting its behavior [6]. We will tag each turtle with a transmitter and track females to monitor whether individuals emerge to nest. After the conclusion of the nesting event, we will relocate and recapture all tagged turtles to retrieve transmitters. If olfactory cues are involved with the synchronization of nesting, we would expect the sea turtles treated with ZnSO4 to lag behind in nesting.

The VHF Radio receiver, antenna, and transmitters will allow us to tag and track each turtle in our experiment. Our pilot experiment tested an alternative low-cost approach and identified the need for this technology to ensure we can track the individuals from our experiment amongst the hundreds of thousands of sea turtles that emerge to nest in a single mass nesting event. View the feature of our pilot experiment in the video by National Geographic (included under "Additional Information"). Specific equipment details: Lotek receiver (SRX800 D2), antenna (AN-6YG), and transmitters (V2G 154C, 16 at $199 each).

**ADDED VALUE: If we reach our goal, we will offer the "added value" of an additional 16 radio transmitter tags ($3,184) to double the sample size in our experiment.

Vanessa Bezy is a Ph.D. graduate student at the University of North Carolina at Chapel Hill. Her project addresses one of the great mysteries of marine biology: how thousands of olive ridley sea turtles coordinate their behavior so that they emerge together on the same beach to nest simultaneously during mass-nesting episodes. The research is fascinating and valuable, both from the perspective of pure biology and because it will help conserve endangered sea turtles. 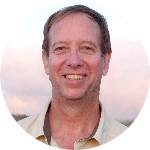 Ken Lohmann
Charles Postelle Distinguished Professor of Biology
University of North Carolina at Chapel Hill
How ridley sea turtles coordinate their mass nesting events remains an astonishing enigma. During these incredible events, hundreds of thousands of sea turtles nest en masse on a tiny stretch of coastline but we have no idea how they synchronize their emergence. Vannessa's project takes a giant first step in unravelling this mystery and utilizes cutting edge technology to investigate a question that has proven notoriously difficult to study. 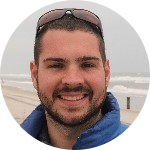 J. Roger Brothers
Ph.D. Candidate
University of North Carolina at Chapel Hill
Olive Ridleys are unique among sea turtles in that they exhibit, along with their sister species the Kemp's Ridley, a synchronous mass nesting behavior in which tens of thousands of turtles emerge to lay their eggs over a few nights. The underlying physiological drivers of such behavior have yet to be elucidated. Understanding the behavioral mechanisms that regulate this behavior is essential to provide these turtles basic protection, as well as properly managing the Ostional mass nesting population. 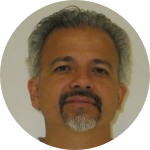 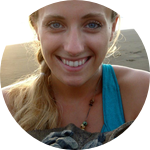 The Lohmann Lab is interested in the behavior, sensory biology, and neuroethology of marine animals. Topics of particular interest include (1) the navigation of long-distance ocean migrants, (2) magnetic field perception and the use of the Earth's magnetic field in animal navigation, (3) geomagnetic imprinting as a mechanism of natal homing, (4) applications of sensory ecology and movement ecology to conservation biology, (5) the use of novel computer and electronic technology to study behavior.

I have been conducting research at Ostional, Costa Rica since 2010. I first came to Ostional to conduct independent research on nest density in conjunction with a research assistantship studying hatching success. I continued to complete a Masters thesis on the microbiology of nest sand at Ostional and I am now conducting my dissertation research at the Ostional National Wildlife Refuge. My coursework and research has trained me in field techniques, experimental design, statistical analysis, and the presentation and publication of scientific research. Additionally, my language skills and 5 years of experience conducting research at Ostional, Costa Rica allow me to collaborate closely with local conservation management.

My research assistantship in Ostional, Costa Rica assisting a Master’s student and conducting independent research of my own provided me with an in-depth field research experience and allowed me to mature and develop as a scientist. In addition to gaining experience working with mass nesting events and nest inventories, I designed and carried out a study to determine the nest density at Ostional and developed new methodology for monitoring the density of nests [1].

I returned to Ostional soon thereafter to complete a Masters thesis on the microbiology of sea turtle nest sand. My results were published in two open-access peer-reviewed journals [2, 3] and featured in The Conversation [4], an online periodical that aims to connect the wider public to the latest research.

My doctoral dissertation research investigates the mass nesting behavior and possible mechanisms behind the synchronization of nesting in olive ridley sea turtles. I hope that my research will begin to answer some of the mystery behind this natural phenomenon through various behavioral observations and manipulative experiments and provide the data necessary to inform management and protect the future of this natural phenomenon.

4 Lab Notes Posted
A Day in the Life
Fostering Citizen Science
How did I get here? The short version of my story.

Caption: This video is a National Geographic feature of our pilot experiment, which identified the need for VHF radio transmitters to track sea turtles in our experiment. There were simply too many turtles for us to find and recapture the painted turtles within the hundreds of thousands that arrived to nest! 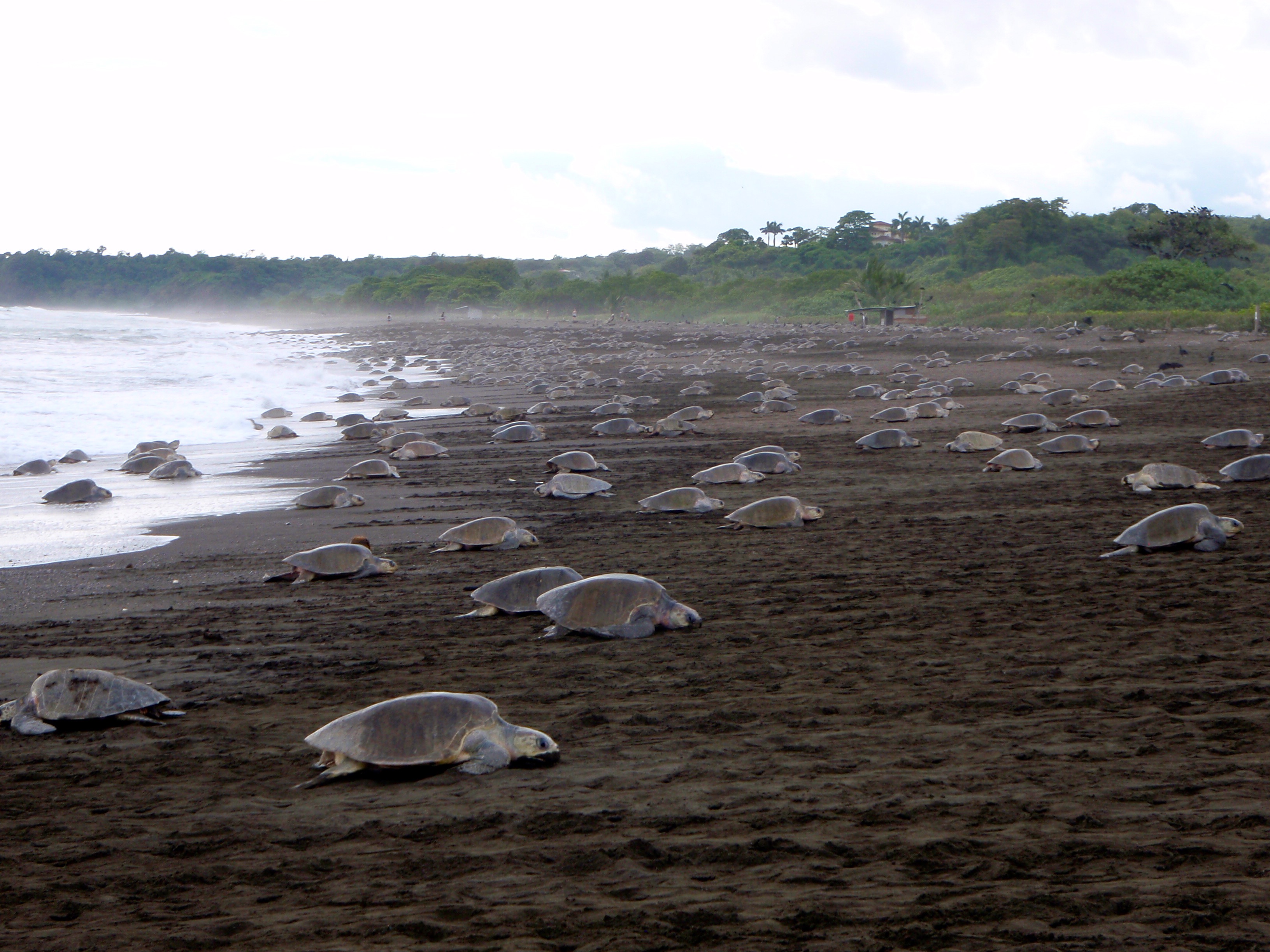 Caption: Aerial photograph of offshore aggregations of olive ridley sea turtles in the days leading up to a mass nesting event (photo credit: Marta Andelson-Stein). Sea turtles may be forming these aggregations and releasing pheromones to coordinate and synchronize their nesting behavior. 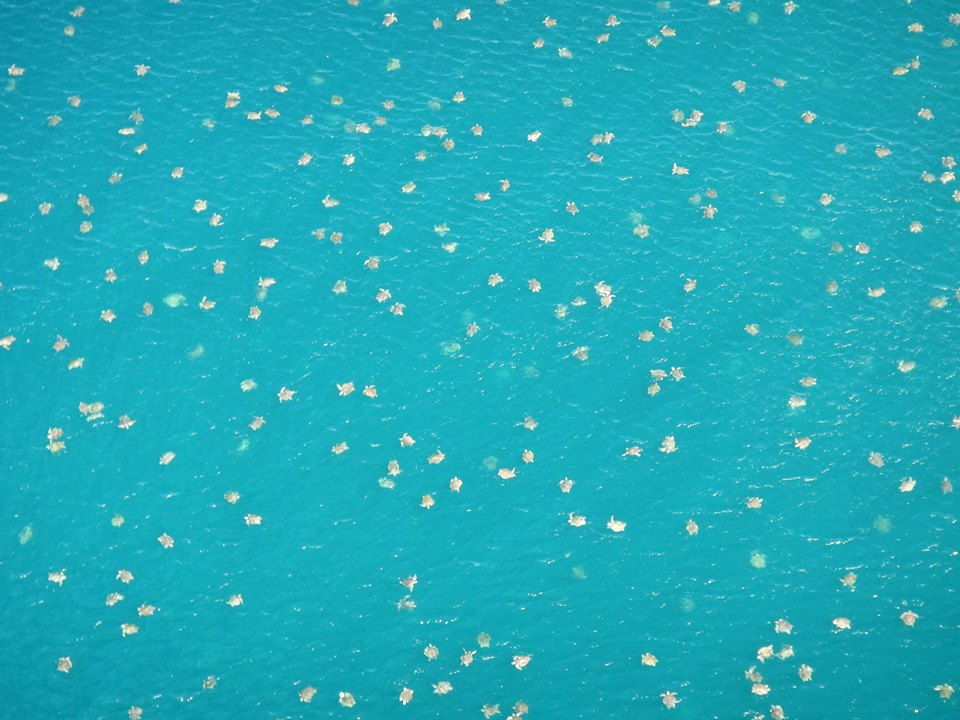