The biggest threat to snow leopard populations is retaliatory killing by angry farmers when they find that the leopards have eaten their livestock. This project will look at the snow leopard diet by analyzing remains of prey species DNA in its scat to see what the snow leopards are eating.

Snow leopard is an endangered species that is found throughout the mountains of South and Central Asia. The research will help answer question about the extent to which snow leopard depend on domestic livestock to supplement their diet. The research will also help answer questions about relationship between snow leopard prey preference and availability of natural prey. Currently, knowledge about snow leopard ecology and its diet is very scant, mainly because of the difficulty of studying the animal in the wild. New techniques such as extraction of prey species DNA from snow leopard scat has made it possible to gain that knowledge with relatively much ease.

The gene sequencing work will be conducted by Dr. Jan Janecka, Assistant Professor at the Bayer School of Natural and Environmental Sciences
Department of Biological Sciences at Duquesne University. I have collaborated with Dr. Janecka in the past. 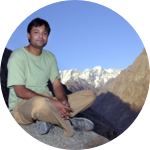 Shafqat Hussain has a Ph.D. in environmental studies and anthropology form Yale University, USA. He is interested in understanding how human societies and environment shape each other..