Wild animal microbiomes have received minimal research and we often don’t know what constitutes a "healthy" microbiome for these species. Such knowledge is especially important for the conservation of vultures, which rely on their specialized guts to neutralize toxins. My goal is to identify the microbial partners (aka microbiome) of California Condors at the chick and adult stage and identify external factors that influence microbiome composition and diversity across individuals.

Animals and their microbial partners shape each other and are both influenced by external forces. Individuals with abnormal microbiomes may be more susceptible to illness or exhibit abnormal behaviors. However, we often don’t know what constitutes a "healthy" microbiome for wildlife because their microbiomes have received minimal research. We will use metagenomic sequencing to characterize the gut microbiome at the chick and adult stage in captive and wild California Condor populations. Additionally, we will identify external factors that influence microbiome composition and diversity across individuals. Our project will thus provide baseline data for future utilization of microbiomes in assessing condor health and potentially new treatments for resilience to toxins.

Condors, like other vultures, rely on their specialized gastrointestinal tracts to break down carrion containing pathogenic organisms or environmental toxicants. As a result, vultures may be particularly susceptible to gut microbiome perturbation. Chronic exposure to toxicants can alter gut microbial diversity, which may partly explain why vultures have been disproportionately impacted by anthropogenic toxicants relative to other wildlife. Captive-breeding programs have been instrumental in preventing the extinction of multiple vulture species. Since the microbiome is related to host health, understanding how captive environments influence microbiomes is important for post-release survival of endangered species and overall success of captive-breeding programs.

We will answer two main questions:

1) How does rearing strategy within the captive-breeding environment influence the California Condor chick gut microbiome?

2) How is gut microbiome composition and diversity within captive and wild California Condor adults influenced by external factors?

The proposed items will allow us to get our project off the ground and start sample collection.

We aim to collect multiple samples from 10 chicks over a time span of 6 months for an estimated total of 60 chick samples and one sample from 30 adults. The total sample size for the project will total 90.

Condors will be placed in modified plastic dog kennels to collect fecal samples. Each kennel must be "condor proofed" to prevent injury and provide a calm space, as well as have a removable sampling tray installed. The sampling tray will allow us to check for samples while minimizing stress on the bird. Fecal samples will be stored in sample collection vials with preservative and frozen until DNA extraction.

We also need funds to purchase a TruSeq PCR-Free Library Kit for DNA Extraction. This will allow us to process up to 96 samples, which should cover a majority of the project.

Any additional funds will go towards sequencing services at the UC Davis Genome Center.

This project is exciting because it will show us how different approaches to captive breeding (parent vs puppet rearing) affect California condor microbiomes. Studies on other species show that captive bred individuals can have microbiomes unsuited for the wild environment and given the number of toxins that condors are exposed to after release, it’s critical that their gut microbiomes are healthy! Diana is particularly qualified to do this research because she's knowledgeable about vulture ecology and has prior experience working with condors. 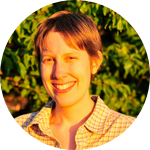 We will begin collecting condor chick fecal samples during March 2022 when eggs begin to hatch. Sample collection for adult condors will coincide with annual health checks starting in October 2022. Around March 2023, when health exams have finished for the season, we will start DNA extractions in the lab. We will submit our extractions to the UC Davis Genome Center around September 2023 and receive data shortly after. Then we can start data analyses and writing! 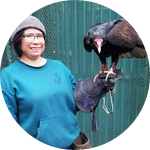 I'm a PhD Student in the Graduate Group in Ecology at UC Davis within the Genomic Variation Laboratory (phew).

I've always been interested in birds, but my fascination with vultures officially began when I worked with Orion the Turkey Vulture at the California Raptor Center. I was enthralled by his curiosity and intelligence!

I interned with the California Condor Program at Pinnacles National Park and my interest in vultures grew. I realized that many vulture species across the globe face some toxicological threat. How are these birds so easily poisoned by the chemicals we have introduced into the environment when they have evolved such a powerful gut and immune system?

One day, it clicked - could the microbial partners of vultures play some vital role in how they respond to toxicants? And here we are today!

A previous study used 16S rRNA sequencing to characterize the California Condor microbiome. However, they only sequenced samples from captive individuals which limits application to wild individuals. Additionally, 16S rRNA sequencing can only inventory bacterial taxa. Metagenomic sequencing will allow us to identify microbes with greater resolution and begin to examine their function within the gut.