Have you ever wondered why some animals cooperate and others fight? I am studying cooperation and conflict during mating in 10 species of daddy longlegs to understand why.

I am headed to Virginia to conduct field & laboratory work to study daddy longlegs mating. This work is possible thanks to your support!

If you back my project, you will get to see a new video each day July 18-23 - with any luck you will see a new species each day!

We all know from personal experience that sometimes cooperating is advantageous and sometimes it is better to fight. Scientific research has shown that these two alternatives are biologically important. However, we don't know why some animal species cooperate much more frequently than others.

The goal of this research is to study mating behavior in daddy longlegs to see how the social group affects the likelihood of cooperating versus fighting between mates.

Thanks to all the support from backers like you I have met my first funding goal! The Mountain Lake Biological Station granted me a fellowship to stay at the station cost-free (thank you!). Backers like you have helped me purchase the necessary video equipment for the trip. However, the transportation to/from the field station has cost me quite a bit out of pocket, and any additional help will be greatly appreciated. Plus, you will get first access to awesome new videos each day during my field work! Please spread the word to any one who would be interested in participating in this project!

Reason for my Experiment project: I am experiencing a gap in funding this summer during a critical time to conduct my research. Funding will allow me to continue my research this year by funding the purchase of video equipment necessary to document mating of daddy longlegs during my field season. 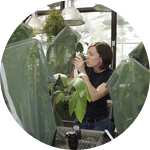 When I was an undergraduate researcher, I saw a video of daddy longlegs mating, and was instantly fascinated. Now, 10 years later, I have published my first scientific paper on these animals (along with two undergraduate researchers who wrote the paper with me). In the Fall, I will be an Assistant Professor at Saint Louis University, and am super excited to continue studying these fascinating animals in order to understand more about cooperation and conflict. I involve students (many who co-author resulting papers) and the community in my research, as well as provide Outreach Education experience for underserved and underrepresented groups. Please visit my home page to find out more about me and my research (https://pantherfile.uwm.edu/kaseyff/webpage/RafaLab_KaseyMainPage.html)

Outside research, I have a small art business (www.etsy.com/shop/FowlerFinnGlassArt), rescue border collies, and stay fit rock climbing and trail running.

Kasey Fowler-Finn has been fascinated by arachnids like spiders and daddy longlegs since she was a small child. She now gets to live her dream by studying them. Her research focuses on how changes in the world affect how animals survive and communicate with one another - such as during mating. Particularly with the rapid changes our earth is experiencing, predicting these changes can be important for understanding how biodiversity will be affected by global climate change.

One of Kasey's passions is to train undergraduate and citizen researchers in the scientific process. Involving students and the public in her research has not only been exciting and educational, but has also helped push her science forward. Many of her co-authors on published scientific articles are undergraduates that continue on to careers in science and medicine, and many papers acknowledge local groups for their efforts in collecting animals for experimentation.

Please see her website for more information on additional research projects she is working on: https://pantherfile.uwm.edu/kaseyff/webpage/RafaLab_KaseyMainPage.html.

11 Lab Notes Posted
Start writing...
What happens on the underside of a mating pair?
Video of Day 3: Leiobunum euserratipalpe

As the field season progresses, I will add videos and pictures of species recorded while mating for the first time!!!