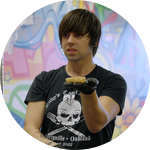 Dr. Josiah Zayner is constantly pushing the boundaries of Science outside traditional environments. He started Biohacking during his Ph.D. in Molecular Biophysics at the University of Chicago, creating The Chromochord in his apartment, the world’s first musical instrument that uses engineered protein nanotechnology. After his Ph.D., Josiah received a prestigious fellowship to work with NASA's Synthetic Biology program, engineering bacteria to help terraform Mars. Now he is the Founder and CEO of The ODIN, a company that is teaching people how to do genetic engineering at home. Besides starring in the Netflix documentary Unnatural Selection, his work has been featured in the New York Times, Time, Scientific American and NPR, among many others.

Genetic engineering of fungi for next generation sustainable tools

Can we express a synthetic gene of interest in bacteria for study as an antiviral?

Can we impact our health by impacting the microbes on our skin?