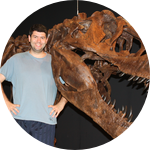 Dr. David Hone is a researcher and British paleontologist at the University of Bristol specializing in dinosaurs and pterosaurs. He has a degree in zoology, a masters in taxonomy, and a PhD in palaeontology. Over the past few years, Dr. Hone has spent time working in Germany, Mexico, China, and Ireland.

About
I’m a vertebrate palaeontologist working in London. Over the last few years I’ve worked in Ireland, Mexico, Germany, Japan and especially China. My work focuses on the behaviour and ecology of the dinosaurs and the flying reptiles, the pterosaurs. I have been working on the carnivorous habits for some years now and have produced a series of papers based on the patterns of bite marks left by these animals which can be used to reconstruct their behaviour. My work has also included naming a number of new dinosaur and pterosaur species including Zuchengtyrannus – a giant tyrannosaur from eastern China and close relative of Tyrannosaurus and the unusual herbivorous dinosaur Limusaurus.

In addition to my research I do a lot of scientific outreach work, writing on blogs and building websites to help communicate with the public as well as doing talks and events. I’m committed to breaking down the barriers between the public and research and I hope that Microryza can help push this further by getting people more directly involved.
Joined

Do you want know what the dodo ate? So do we!

Have we found a new species of pterosaur from the Solnhofen Limestone?

Pterosaur paper is out

Well the second bonus paper is now published, also in PeerJ: https://peerj.com/articles/1191/ This was a bit unexpected (well I knew I'd submitted it, but not that it would be out today) so I don't...

Well, that's it. The paper is now published and available at PeerJ here: https://peerj.com/articles/885/I've naturally got some commentary up myself in various places, so you can read the short and...

Well it's now less than 24 hours till the paper is published. It will be out and online very soon in PeerJ. Not that this is a measure of success, but the journal and the media have taken a strong ...

Well the reviews of the paper are back and they are generally positive, so Darren and I are working on the corrections and obviously fingers crossed it will go through OK. As part of the submission...

Well, it's done and sent to PeerJ. Obviously we'll have to see how the editors / referees respond, but fingers crossed this will be liked and will go through. I have included all the names of spons...

Well it has taken rather longer than hoped / planned, but I have finally complete the manuscript. The paper is written (just over 10 000 words worth), the references and especially the figures (17 ...

Hello all! Well I know it has been another age since this has been updated, but things are finally moving again after some unfortunate and unavoidable delays with things, the project is moving agai...

Well it's been a while since I put an update on here, though they have been tricking in on the Facebook page I created for the project. If you are not on this, do let me know and I can add you in.I...

Thanks again to everyone who has contributed in various ways with their time and effort, it's much appreciated. I'll wait till the funding period has closed before doing anything else on this and o...

Backers Only
4
0
0
Show more updates
Hi Matt, no problem at all! Happy to do so. :)
Cannibalism in Giant Tyrannosaurs
View comment
Well obviously it may potentially be very hard if not impossible, but it can be worked on. The key issue is going to be tooth spacing - since this has yet to be looked at by researchers, we don't yet know if it's possible, but the typical spacing between teeth is definitely different between some theropods (I've checked this for a previous paper on bite marks). Sp by measuring the teeth positions in a series of each, we can build up a profile of the spacing and try to match either to the marks. In terms of feeding patterns, every specimen is important because they are so rare. However, some feeding patterns are already clear for tyrannosaurs (they use a combination of scrape feeding and bite-and-drag feeding) and it's been suggested that they were selective feeders and varies the feeding strategy according to the food at hand. This specimen can help confirm or challenge this hypothesis depending on the types of bites and their location on the skull and mandible.
Cannibalism in Giant Tyrannosaurs
View comment
Well I'd like to think it's not too bad, it's not a huge number of people would need to provide something like 10 dollars. Every little helps of course though, and I'd like to think I've built up a fair bit of goodwill via the various blogs and sites. Last count I'm up to about 1500 blog posts of palaeontology and science communication and nearly 1000 answers on Ask A Biologist. :)
Cannibalism in Giant Tyrannosaurs
View comment
Thanks so much to the first sponsors, it's very kind of you.
Cannibalism in Giant Tyrannosaurs
View comment