A more detailed description of the project from a previous proposal is available here.

The research is significant for two main reasons:

1) If the two different specimens in the sample of Aurorazhdarcho micronyx do represent a new species, it will be the first new species found in the Solnhofen Limestone in over 80 years.

2) If the Gnathosaurus subulatus skulls can be associated with Aurorazhdarcho micronyx or the possible new species, that will complete the taxonomic revision of the Solnhofen pterosaur fauna that I have been working on since 1993.

The Solnhofen Limestone of southern Germany is important to the study of pterosaurs because it provides the best view of an Upper Jurassic pterosaur fauna by way of hundreds of excellently preserved specimens that reveal their anatomy including soft tissues and wing structure, pattern of growth, and diversity, and the micronyx-Gnathosaurus problem is the last taxonomic loose end to tie up.

The goals of this project are:

1) to study the available specimens of the pterosaur Aurorazhdarcho micronyx and determine whether there is a new species mixed in the sample.

I will provide lab notes monthly before the research travel, at least weekly during the museum visits, and as needed afterward.

The funds will be used to pay for airplane and train travel to and in Europe planned for the Summer of 2014 to visit museums holding pertinent specimens. I need to study specimens of Aurorazhdarcho micronyx and Gnathosaurus subulatus in London, Uppsala, Berlin, Dresden, Bamberg, Budapest, Munich, Basel, Haarlem, and Leiden. Within Europe I will fly from London to Stockholm, and Stockholm to Berlin because going by train would waste 3-4 days. The rest of the travel within Europe will be by train with travel planned for evenings after museum work and weekends as much as possible so as to maximize research time. An 8 day 5 country Eurail Select Pass will provide most of travel in Europe, but I need a separate train ticket to get back to London to catch the return flight to Pittsburgh. An additional $100 is included to cover incidental travel by train, bus, tram, etc. while in Europe. Note that the budget presented below does not cover lodging, but if pledges exceed the proposed budget any excess will be used to cover lodging. 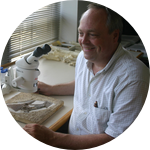 Chris Bennett is an Associate Professor in the Department of Biological Sciences at Fort Hays State University. He has conducted research on pterosaurs since 1985 and published on many different aspects of pterosaur biology: descriptive morphology; functional morphology of flight and terrestrial locomotion; ontogeny; sexual dimorphism; and taxonomy and systematics. Since 1993 he has had a long term research project on the anatomy and taxonomy of the pterosaurs from the Solnhofen Limestone.

Bennett, S. C. 1996. Year-classes of pterosaurs from the Solnhofen Limestone of Germany: taxonomic and systematic implications. Journal of Vertebrate Paleontology, 16:432-444.
Bennett, S. C. 2013. New information on body size and cranial display structures of Pterodactylus antiquus, with a revision of the genus. Paläontologische Zeitschrift, 87:269-289.
See also the Research page on my website at: http://bigcat.fhsu.edu/biology/cbennett/research.html.