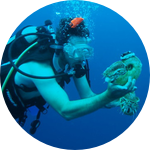 Save the Nautilus & Central Campus

I was 4 years old when a squid documentary on TV got me interested in the ocean. Since that time, the only thing I've wanted to do was become a marine biologist and study the ocean, specifically cephalopods.

Currently, I am a Conservation Biologist for Save the Nautilus and a Marine Biology Instructor for Central Campus. Prior to this, I worked at the National Resource Center for Cephalopods (2003-2008), Prince William Sound Aquaculture Corporation (2005), the Aquarium at Moody Gardens (2006-2008), and Alaskan Observers Inc. (2008-2010).

I completed my doctoral dissertation, "On the Biology, Behavior, and Conservation of the Chambered Nautilus, Nautilus sp." My current research focus is addressing the remaining gaps in our understanding of several basic biological and behavioral questions about nautiluses to promote conservation and good stewardship going forward. A large part of this is educational outreach and awareness which is why I recently took a position at Central Campus in the Marine Sciences Department to not only provide high school students with a chance do their own research and ask their own questions, but also engage the next generation of students in the entire process of conserving nautiluses and the ocean as a whole. These students will directly impact and impact nautilus conservation by working on their own projects in the laboratory which address specific questions about nautiluses. Having students involved in the whole process legitimatizes the long term success of our over goal to protect nautiluses.

From Living Fossil to Fossil: The Extinction of Chambered Nautiluses

Now, with nautiluses being formally proposed for protection by regulating their trade, it is even more important to continue the work we have been doing for years to support nautilus conservation. ...

TRAFFIC Report on the Nautilus Trade and How to go ForwardTRAFFIC, an organization that monitors trade of animals, released its findings on the nautilus shell trade. In short, (1) nautilus fishing ...

This is What We Do and Who I am.

Our research is not only helping to protect nautiluses. It is also providing data on many other species in the deep sea, like the wonderful 7-armed octopus.. Saving nautiluses also protects their h...

I was 4 years old watching a documentary or something on TV about squid and I told my Dad that I wanted to become a Marine Biologist, get my PhD, and study squid (Kids say the strangest things don'...

Although, I think they may be a little rough...

In 2011, our team traveled to the Philippines for our first expedition. The Philippines is "Ground Zero" for nautilus fishing - fisheries here have been going on for nearly 50 years. It was my firs...