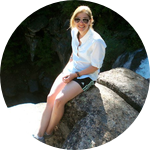 About
I am a PhD student in Entomology at Penn State. I have earned my BA (Biology) and MS (Entomology). I have wanted to study plants since 7th grade when I decided I wanted to grow to genetically engineer crops for colonization of Mars. I am still fascinated by plants, but am working on solving problems a little closer to home. Previously, I worked toward reducing insect damage by studying plant odors, and collected seeds for restoration projects in the Eastern Sierras of California.

The Mosquitoes of Puerto Rico

What chemical pollutants are in the plastics ingested by Kelp Gulls?

The caterpillars have spoken!

The last 2 weeks have been crazy! As you know (if you have read previous lab notes), I have been growing corn in the soils that I collected from different fields in PA and OH. These plants grew so ...

The corn plants are growing! It has been interesting to see how the different soils are causing the plants to grow at different rates. Next week my caterpillars come in, and I will ...

This week I've been working on how to kill microbes in my field collected soils so I can compare the effects of soil microbes on corn resistance. It has been a surprising challenge! I have been tes...

Two weeks ago, I collected my first soils from a farm in Ohio that has been no-till and cover-cropped for up to 45 years! I collected soils from a couple different fields so I could make comparison...

I deposited your check at Penn State this morning. It was a big moment. I can't wait to get started collecting soil and growing these plants! I'm so excited that all of you wonderful people are int...

I have started growing corn seedlings to test my feeding assays so that when we start our big project, we will have methods that work. Baby corn seedlings are so cute!!

Part of what is so exciting about this experiment is understanding what microbiology is going on below the surface of the soil, and how that connects to plants and insects that we see above ground....

I went out the the research farm today to pick up some old seeds from previous experiments in our lab. Everything at the farm is still covered in snow and ice! I'm going to test varieties to see ho...